How You Topple The Greatest Nation on Earth

History shows us how great empires like Rome fell not because they could be beaten militarily, but because they could collapse from within. When the population of that country fails to unify under a single culture that nation's flag only social unrest will result. All the enemies of that nation have to do is instigate protests and influence the media to lie to the people and just watch an independent republic melt away. Yuri Bezmenov, a former KGB agent defected to Canada gave lecture tours throughout the US in the 1980’s warning Americans of the perils of not responding to the false narratives of radicals advocating socialism and open borders.

The road to destruction

He marveled at just how far Soviet propaganda had come in influencing the US at that time as the American mass media attacked Ronald Reagan’s efforts at restoring the US economy and strengthening the American military. Trying to salvage US prosperity from the incompetence of previous President Jimmy Carter, today we see President Trump struggling to restore American prestige after 8 years of the faulty and intentionally destructive policies under President Obama. All it takes is relocating millions of refugees who do not share American values and allowing illegal immigrants to storm our borders, and you’ve established a voting base that can overturn elections! This is exactly what the Democrat Party has been doing.

As Yuri Bezmenov said, there were 4 stages that Soviet propaganda efforts would subject a society they wanted to overthrow to. 1) Indoctrination 2) Demoralization 3) Destabilization and 4) Normalization, which the Soviets jokingly proclaimed when their troop trucks and tanks were parked on the streets of that nation. Today the left, the Democrats, the progressives, the globalists, the LGBT, and Islamic terrorists within our borders are all working toward the same goal-destabilizing our nation either financially or through insurrection. Aided by low information voters who believe in fake news as they allow CNN, MSNBC, Yahoo, ABC, NBC, and CBS think for them.

Why would news corporations want to undermine their own country? Yuri Bezmenov had an answer because he instigated disinformation campaigns. The “Useful Idiots” as he called them were just foolish enough to aid in the destruction of their own country either to attain privilege, mimic hostile ideology out of alienation, or simply as traitors! When only 6 broadcasting corporations own 90% of the airwaves there is not much opposition left to refute the lies! Remember our own US Attorney General Eric Holder claiming that domestic terrorists kept him up at night when in truth there are few white supremacists committing atrocities compared to the loss of life suffered from Islamic terrorism within the domestic zone of the US. Remember President Obama refusing to denounce the unrest caused by racial rioting as cities like Ferguson and Baltimore burned while Barack invited violent protest leaders to the White House for a congratulation? Why would any US President congratulate violent demonstrators as our cities burned? 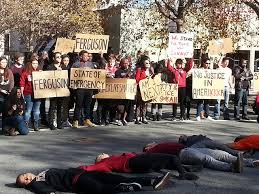 One might recall in 2010 that Federal instructors were teaching government employees that our Founding Fathers committed acts of terrorism and were more interested in succeeding as rum runners rather than liberating the 13 Colonies from British tyranny! This while some 29 terrorist training camps operated within the United States! How could this be allowed to happen? Yet, this is exactly what does happen when a nation is becoming demoralized from within by its own civilian leaders!

The major broadcasting corporations in America are multinational conglomerates in partnership with our enemies such as China, Russia, and the Middle East. This is why we see programming that is aiding in the decay of the American family, why the news is severely slanted into leftist jargon that defies the truth and undermines our Constitutional government. For decades our major news organizations have been influencing the outcome of elections with false polling data and negative commentary toward conservative and Constitutional policy. We are now at a critical tipping point where the lessons of history-incontrovertible evidence against the arguments for socialism yet, young adults cannot decipher the difference between capitalism and the documented failures of Communism.

Indoctrination of the young student’s mind in government-funded public schools has helped the masses accept ideas and policies that are destructive to the very Constitutional foundation of America, The level of social engineering that has allowed government fiscal mismanagement and faulty policies to dangerously elevate the national debt reflects just how the internal destabilization could succeed. All of this thanks to the intentional disinformation Soviet style that has plagued our nation and now brings the country to a final showdown in the next election.

As Yuri Bezmenov stated once public officials and government bureaucrats begin using their unelected influence to bypass due process of law the citizens are completely vulnerable to the whim of corruption. Remember Supreme Court Justice Roberts cast the deciding vote on Obamacare and US citizens had been betrayed. Yet, Roberts struck again voting against the requirement for a question of citizen or non-citizen status which was to be included in the 10-year census, a question that has been included in that process since 1820. If the blatant law breaking does not cease America will no longer remain a Constitutional Republic or a sovereign nation.

*note - My family has researched our genealogy, and I am NO relation to Supreme Court Justice Roberts. :o/

"On a lighter note this is the Best ad I've ever seen. Awesome."
58 minutes ago