Good for them, except that now Israel will slaver and pressure Mr. Flip-Flop (known as Donald Trump) more to carpet bomb Iran, so they can steal their natural resources.

" The old expression, 'to the victor belong the spoils' -- you remember. I always used to say, keep the oil. " - Donald Trump at CIA HQ

"We may have to get in wars. We’re better prepared than we’ve ever been. If Iran does something, they’ll be hit like they’ve never been hit before." - Donald Trump, October 2019

Iranian President Hassan Rouhani has made an unusual announcement distinct from his normal emphasis on mere 'defiance' of US sanctions; instead, he is now boasting of the discovery of a new oil field with over 50 billion barrels of crude in the country's south.

"I am telling the White House that in the days when you sanctioned the sale of Iranian oil and pressured our nation, the country's dear workers and engineers were able to discover 53 billion barrels of oil in a big field," Rouhani said in a speech Sunday. 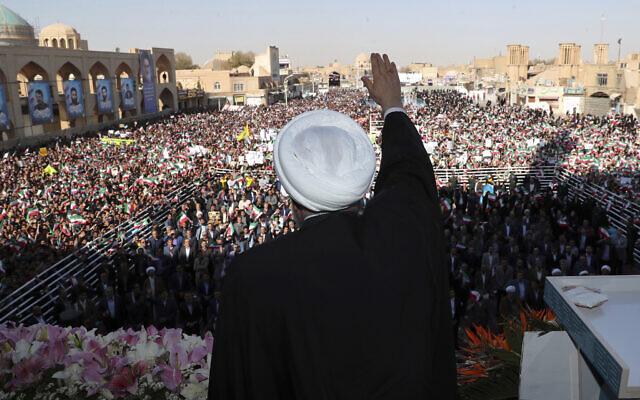 Rouhani during his Sunday speech in the city of Yazd, via Iranian Presidency/AP

He described that the new discovery made in Iran's southern Khuzestan province, the country's domestic energy and oil production heartland, would hugely bolster Iran's proven reserves of roughly 150 billion.

The Associated Press reports this as "a find that could boost the country's proven reserves by a third as it struggles to sell energy abroad over U.S. sanctions."

And further, Rouhani appearing as if to quash any doubt, described specifics according to an AP summary of his words:

The new oil field could become Iran's second-largest field after one containing 65 billion barrels in Ahvaz. The field is 2,400 square kilometers (925 square miles), with the deposit some 80 meters (260 feet) deep, Rouhani said.

Despite having the world's fourth-largest proven deposits of crude oil, Iran has struggled to evade Washington sanctions on its energy sector and to sell to other countries....

MAC - Maybe. However, I have known people that read and speak Arabic, and Ahmadinejad did not say Israel should be wiped off the map. He said "The Israeli regime should vanish from the page of history." Big difference.

James they don't have nukes but are trying to get them most likely for the reasons you stated.  Everyone thinks having nukes makes a country safe from attack.

Israel can use the excuse if Iran gets nukes they are going to use them on Israel, Iran has been very open about it's hate for Israel and it's destruction. Israel has nukes and could well be considered justified to turn Iran into a sheet of glass. get them before they get us mentality. the oils a huge bonus, possibly an incentive. I think Iran should have STFU about the oil.

MAC - I stridently disagree. Why do you think they're not bombing N. Korea right now? If I was a dictator, or even the elected leader of a nation with oil, rare earth metals, etc., I would want nukes as soon as possible. Then they couldn't afford to attack, and take the chance a nuke would get through.

Now they have something to lose, maybe it might dawn on them that becoming a nuclear power is not such a good idea...yeah think ?

Iran probably would have been better off to just STFU about that lil resource discovery.... best start wearing ya Sunday best Iran.....cuz you're going to have a lot of visitors here for dinner shortly, .....and they're planning on stealing the silverware when they leave

James Roberts commented on Central Scrutinizer's status
"Indeed, not that it will make any difference, though."
16 minutes ago

James Roberts commented on Chris of the family Masters's blog post American National Alert and Appeal
"Hitler wasn't a pagan or a satanist, he didn't love war, and he didn't ban guns. Nor…"
18 minutes ago

"Israel doesn't have a constitution. The govt can do whatever it wants."
24 minutes ago

"Even if the "public domain" is privately-owned, they don't have a right to censor.…"
27 minutes ago

Chris of the family Masters left a comment for stormtruther
"Thanks buddy. Is Bananaman back?"
4 hours ago

cheeki kea commented on Chris of the family Masters's blog post American National Alert and Appeal
"True Mr Sis. - It's not a good idea to to show up in public places where gun grabbers eyes are…"
4 hours ago

stormtruther commented on stormtruther's blog post How the Incoherent Theory of Evolution Distorts Our Thinking
"I can't say I'm completely convinced but i have my doubts about evolution, this is good…"
4 hours ago

How the Incoherent Theory of Evolution Distorts Our Thinking

stormtruther favorited Chris of the family Masters's discussion Australia wake up!
5 hours ago