JFK Special: Oswald was in the Doorway, after all!

The release of the notes taken by Dallas Police Department Homicide Detective Will Fritz during his interrogation of Lee Harvey Oswald, the suspected assassin of President John F. Kennedy, in which Lee told Fritz that he was “out with Bill Shelly in front” has resurrected a debate of long-standing over whether Oswald was the “Doorway Man” in the famous photograph taken during the assassination by Associated Press photographer James “Ike” Altgens.

In this study, we examine that question. Dr. Fetzer had previously concluded that Oswald was another figure in the Altgens photo, namely, the man who is standing to the right/front of Doorway Man as viewed in the photograph (to Doorway Man’s left/front from his perspective) but whose face and shirt have been obliterated. New observations, first advanced by Ralph Cinque, have convinced Fetzer that Cinque is right: the man in the doorway was Lee Harvey Oswald, after all.

In addition to Cinque’s arguments that the man in the doorway was wearing Oswald’s shirt, Fetzer adds the complementary argument that the shirt of the other figure had to be obscured for the obvious reason that it would have given the game away, which explains why his shirt as well as his face had to be removed. Doorway Man’s face, hairline and the pattern of his shirt were “tweaked” to more closely resemble Lovelady or his face may have been transferred to him, but the form, the fit, and the lay of his man’s outer-shirt and under-shirt are those of Oswald. So, unless Lovelady was wearing Oswald’s clothing, the evidence that we present leaves no room for reasonable doubt.

By Jim Fetzer and James Norwood   “Years ago, when I remarked to Gordon Duff that I thought 50% of the JFK research community was working for the other side, he corrected me, ‘No, it’s 90%’”

But it was not Lovelady. Some also say that photo on the left has been retouched to look more like Oswald.  Ironically, the facial recognition technology used against us has compared the photo to both Oswald and Lovelady and it's a match to Oswald, not Lovelady.

The one I saw?  No, it was very clear that it was Oswald.

some say it twas this man Since this photo was snapped at the same second as the first shot, that clears Oswald. His family deserves reparations.

I was so excited that I got my statement backwards. LOL...sorry 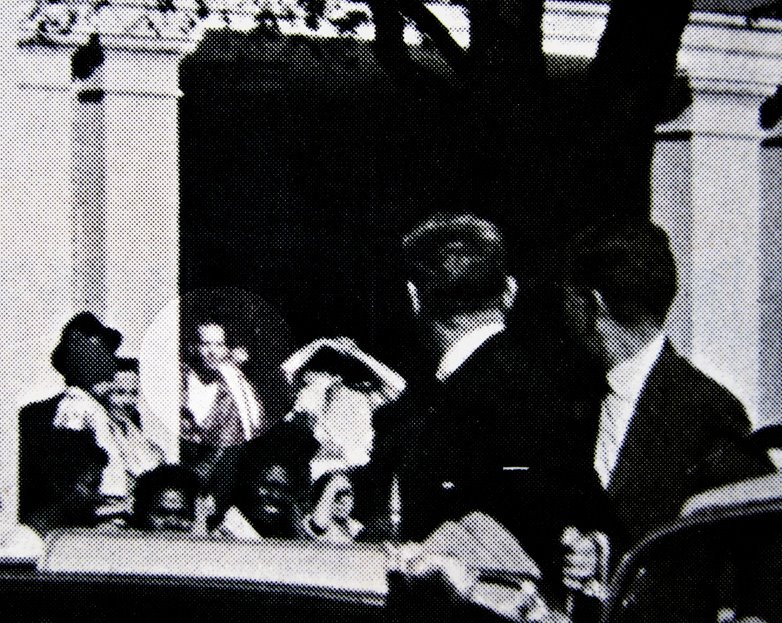 I looked at it again.  The one I saw, he was just leaning up against a door.....

Not the same one.  He was leaning up against a door...no cuffs...just standing there.'

Twilight Zone replied to MAC's discussion The Purge Is On! Former CIA Chief Signals Deep State Coming for Conservatives
"But what about "Unity"?  (sarcasm)"
1 hour ago

Keisha Ruan commented on Chris of the family Masters's blog post President of What?
"Biddens Press Secretary Jen Psaki has got her work cut out for her...ill give her maybe 3…"
1 hour ago

Doc Vega replied to Chris of the family Masters's discussion The Bicarbonate Miracle
"Excellent points. We will stupidly take life threatening prescription drugs over the simplest and…"
4 hours ago