In early 2016 CIA Director, John Brennan, created a task force. Not an unusual thing, creating a task force, usually a temporary collection of officers and personnel dedicated to one issue is not necessarily sinister. The catch is that this particular task force was directed against Donald J. Trump and his ascension to the Oval Office. With the approval of James Clapper, the project entered into an active phase. John Brennan as of 2018 was still attempting to infiltrate the Trump White House to somehow get dirt on the President that could be used for impeachment!

Who really is behind the charade?

Like so many other illegal actions being taken during the years of the Obama Administration it is hard to believe that Barack Obama was not aware of covert actions being taken against President Trump with the revelations of FBI text messages between Peter Strzok and Lisa Page exposing the fact that then President Obama wanted to be kept informed on the FBI’s illegal surveillance of the Trump campaign. Why the former President Obama has not been subpoenaed, interrogated, or named for a criminal referral should be raising a lot of eyebrows, but the US mainstream media is out to protect the Democrats from scandal. One must recall that James Clapper admitted on live TV on CNN that he had been ordered by Obama to conduct surveillance on the Trump campaign!

Add to all this the exoneration of Hillary Clinton by James Comey over serious violations of the Logan Act and the Espionage Act of 1914 due to the secret internet server she maintained secretly at her home, and you have the perfect storm of an administrative coup to unseat a duly elected President just because the Democrats want to be in power at all costs! There is no question of dereliction of duty, criminal negligence, and intent among Comey, Hillary, Clapper, and Brennan, the only question is when will the indictments be handed down?

Today, Adam Schiff, a George Soros protégé, has been undertaking the Trump witch hunt based upon lies, false witnesses, and ineffectual testimony. Using the Intel Committee rather than the Judicial Panel is just one of many irregularities used by the Democrats to try and impeach a sitting president who has done nothing wrong and has been tirelessly investigated by bi-partisan agencies. Yet, this will not stop Democrats from wasting millions of taxpayer dollars in their attempt to interdict an election result that many believe will end up in a landslide victory for President Trump. The Democrats, who have not passed any beneficial legislation on behalf of their constituents have instead put all their efforts into a propaganda campaign of trying to delegitimize the President.

Forcing the Republicans to storm one of Adam Schiff’s secret hearings is just one of many unusual actions that have taken place as a result of the completely non-transparent Democrat moves that brazenly demonstrates not only the desperation among their ranks, but their willingness to stoop however low they need to in order to maintain pressure on President Trump.

Not much time left for them

Knowing their time is short as AG Barr unravels the twisted trail of illegalities and the list of Obama Administration officials involved, the race is on to smear the President before the truth unfolds and the results of Inspector Horowitz’s report now expected out before Thanks giving exposes them. Major disclosures on the Democrats are anticipated when it is released! There’s no question they will pull out all stops in order to regain power in 2020, lies, voting irregularities, more false witness testimonies by former Obama operatives, the people have little to do with the Democrat considerations. Simply use the fake news media and the Deep State to frustrate the President’s efforts to correct America’s heading and make the nation great again, which he, more than perhaps any president in US history has already done in the face of determined and evil opposition! 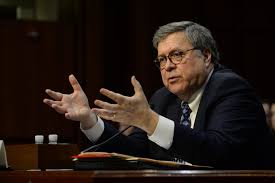 Brennan is traitorous Non-American scum.  Former top FBI Islam expert John Guandolo says that Brennan converted to Islam years ago in Saudi Arabia and remains a closeted Muslim who was recruited by the Saudis as part of a counter-intelligence operation.  Brennan has long been cozy with the Muslim Brotherhood. Despite evidence presented (and later upheld) during the landmark 2008 Holy Land Foundation trial in federal court, which established the Islamic Society of North America (ISNA) as a Muslim Brotherhood organization, and financial supporter of the terrorist organization Hamas, Brennan has continued to meet with ISNA officials and participate in ISNA events.

Brennan was not sworn into office on a Bible, as the tradition goes in America, but on an original draft of the Constitution WITHOUT the Bill of Rights. Clearly, this was a purposeful signal that Brennan has no regard for the limits on the powers of the state enshrined in these amendments.

"Larry I went in and edited this page to try to embed this video, and for reason, it apparently…"
28 minutes ago