NC Gov. Roy Cooper Caught on Hot Mic Talking to Biden About Dem Sen. Candidate and Philanderer Cal Cunningham, “I Know That’s Frustrating, But We’ll Get Him Across” (VIDEO) The swamp is deep.

“I know that’s frustrating, but we’ll get him across,” Cooper said to Biden. 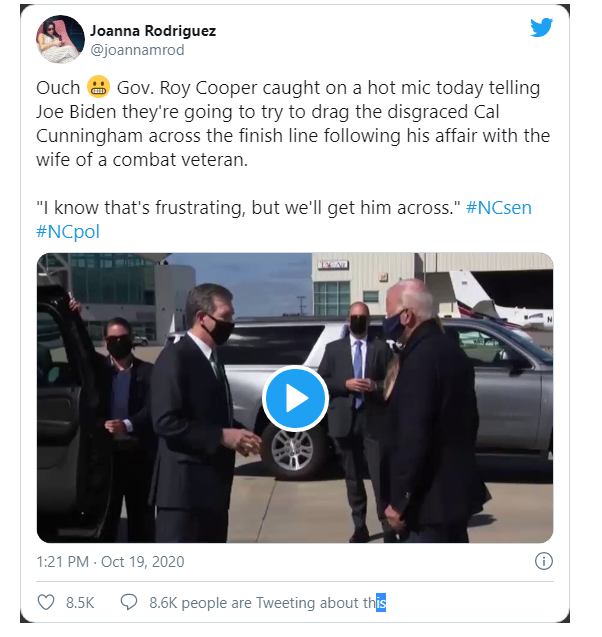 The married father of two is running against incumbent Thom Tillis in North Carolina, on his ‘religious’ and ‘family man’ record.

Cal Cunningham, who is a married father of two, has focused his U.S. Senate campaign against Republican Thom Tillis on Cunningham’s service as a veteran in Iraq and Afghanistan. But Cunningham is evidently engaged in extramarital activity with the wife of a fellow veteran.

Cal Cunningham’s campaign actually had the gall to lecture Thom Tillis on social distancing as Cunningham was flying his mistress across the country for sexual trysts during a pandemic.

Please provide a link to the original

Old Denmark commented on Larry Flinchpaugh's blog post Sen. Rand Paul criticized for questioning of transgender health nominee
"Once depravity rules over basic common sense, it's only a matter of time before the entire…"
6 minutes ago

"The warning from 1900 before Rockefeller "medicine" took a hold on the world. Sadly…"
43 minutes ago

Twilight Zone commented on Larry Flinchpaugh's blog post Sen. Rand Paul criticized for questioning of transgender health nominee
"Our society has lost all touch with reality and common sense.  I don't care if this…"
50 minutes ago

Chris of the family Masters commented on Larry Flinchpaugh's blog post What's really inside your vitamins and supplements | 60 Minutes Australia
"Watching TV is intentionally damaging to our psyche. This was a blatant attack on non-…"
1 hour ago

Chris of the family Masters commented on Larry Flinchpaugh's blog post Quest for eternal life discovers 'magic pill' to keep us forever young | 60 Minutes Australia
"Very conflicting message. On the one hand the cabal wants humanity exterminated, and there is no…"
2 hours ago

A large fire in an industrial area of Compton lit up the sky this morning, scorched wooden pallets and spread to a nearby bus yard and damaged at least two b...
2 hours ago
0 Comments 0 Favorites