Nothing is inevitable. We have the power to halt this monster 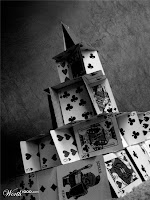 Why is the world suffering from the machinations of the internationalist mafia? What has happened to us that has allowed these inhuman monsters to gain such power over our lives? It seems that not many years ago, although intrigue was afoot, the world at large was for all practical purposes immune to the drive towards the global gulag. So what happened to weaken our natural immunity? Why did we let our mortal enemies get the upper hand?

This is indeed a tricky question to answer. I would hazard to suggest that the reason our hidden masters have such power is that we perceive them to have this power. What has changed is that we now have a mass media which presents a false image of the world to us, and by owning that media, our enemies have convinced us that we are powerless to halt their progress, and that we really shouldn't waste our time trying to.

The printed word, which offered the opportunity for a great spreading of knowledge, has become a medium for the spreading of ignorance and falsehood. To an even deeper extent, audio, and visual media, have become a source of power for those who seek to control us. This is because the human brain works in sounds and pictures and absorbs more information if presented in a manner which mimics natural interaction and experience. Thus the advent of Hollywood and television has proven to be highly significant in influencing how the world is perceived and how this perception is reflected in how people behave in reality.

Our enemies control the media. They own every major outlet, either directly, or directly by being hold the purse strings through advertising. Thereby, they are the editorial power - deciding exactly which issues will be discussed, and in which manner, and which will be ignored. People who speak of revolution are deluding themselves - the media as it exists is in the hands of the globalists, and so long as they have financial power, that is where it will rest.

'Money', in the form we have come to know it, is an illusion. It is produced at the strike of a key on a computer, and from that moment on exists as a generator of debt. We cannot compete with the globalists by trying to become financially more powerful in the conventional sense, as they control the money supply and can create currency at will. What we have to do is look beyond the playing field that has been concocted for our enslavement, and work in reality, rather than in illusion, refusing to play their game and support their agenda.

How do we escape the web which has been spun for us? The media constantly tell us that we cannot. Well, we can. A key step in our struggle for freedom is to stop listening to the lies which are used to imprison us. How many people watch television from the moment they get home, to the moment they go to bed? Some may convince themselves they are 'selectively' viewing and that by filtering out what they consider the most harmful programmes, music, films etc, they are safe from the influence of the mind controllers. This is rubbish! The powers-that-be are far from stupid. They have created levels of control - some obvious, some subtle - but all designed to manipulate the viewer/listener. The obvious mind control is deliberately obvious, so as to allow the participant of the media circus to consider him or herself to have discovered the game and dodged it. 'I don't watch the soaps, I only watch history documentaries' etc - if this is you speaking, you haven't escaped the mind programming, you have actually embraced it more than those who watch all the drivel on the TV, as you belive what you watch to be fair and unbiased. the solution? Turn the machine off, put it in a cupboard, and when the withdrawla symptoms have worn off (It is an adiction - you will experience withdrawal), bin it!

Freeing your mind from the media is but one step in the march to freedom. It is, however, the most important step. Once you are 'clean' of the media poison, you will come to realise that the media are really powerless. they gain control over us because we invite their toxic propaganda into our minds. Once we no longer partake of their lies, they have no power at all. 'But what will i do if I don't have a TV?' I hear you ask. Think about that question - what will you do, other than stare at a box in the corner of your room? For a start you will NOT stare at a box in the corner of your room! You will Not be programmed to be a servant to the machine - eating your meals at certain times so you can watch the programmes you just MUST see! You will be free to leave your home and live in the real world. You will be free to talk to your loved ones - about things which really matter. You will be free to explore your desires, to explore the world and to enjoy your imagination. In short, you will be free to begin living in a manner of your choosing, not in the manner designed by those who seek to control you.

This is but the first step. Believe me, once you have made yourself aware that the media control is a lie, you will begin to see concrete ways to live outside the wider control of the ruling elite - and then we will take back our power from the minority who rule us, and take back our freedom. Their power is the power we give them. Take it back!

Comment by Fred Black on August 3, 2009 at 11:23pm
Some good points. Whatever the mind can conceive and believe it can achieve, even if that achievement is your own enslavement at the hands of tyrannical overlords, because you believe it is hopeless to resist, because you have conceived them to be all powerful and knowing.

I sometimes watch an hour or so of TV over the space of a week and usually on a station that is free from advertisements. Although I am aware of the media's sinister mind programming abilities, and although I am most determine not to succumb, whenever I find myself in a place where it is in my view, I still find myself seriously contemplating a burger from everyone's favorite red headed clown, and this is despite the fact I know full well, that burger in reality is a pile of soggy half cooked mash of bits from 100 different dead animals, all treated with enough preservatives to embalm the dead.

"Until the federal government builds their Smart City, it looks like they are free of electricity,…"
2 hours ago