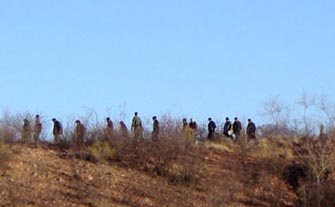 In complete character with the continued assault plan on the American populace as a reprisal for the President not getting his way over the sequester, under White House orders Janet Napolitano approved the release of hardened criminals among the ICE prisoners to be unleashed into society. Could these illegal immigrant detainees have simply been airlifted back to Mexico? Yes. Could the administration have found other ways of cutting the budget such as removing soft drink soda machines, dance lessons, and popular fast food courts from the budget of the ICE? Of course. Instead, what did President Obama instruct Janet Napolitano to do?

Who cares about public safety?

A White House spokesperson made an excuse for the indiscreet and potentially dangerous release of 2000 convicted criminals with records of violent acts. They blamed some overzealous individual who took it upon themselves to make a premature administrative decision. However, it was the Obama White House who ordered the ICE under Janet Napolitano’s authority last week to take these measures. Their instructions were clear. A larger percentage of ICE detainees were allowed to go than the 8% reduction that had already been planned. So, we now know that not only has the Obama White House approved a potential danger to our society by releasing illegal immigrant criminals, but they have lied about it and have allowed a larger number of these people to be set loose within US society.

One can only draw the distinct conclusion from the unveiling of this information that our leaders in Washington simply don’t care. The President and his Democratic propaganda machine are willing to sacrifice the best interests and safety of its citizens in order to attain their twisted political agenda. The sooner that Americans realize that this rude awakening into the President’s total lack of concern for the legal citizens of this nation, the better. Unfortunately, a large percentage of US voters are part of the low information echelon, uninformed, or completely amenable to the President violating any laws that he’s willing to.

With an administration that manipulates the mainstream media by threatening to refuse access or by holding biased celebrity interviews on the political talk show circuit while intentionally misinforming American voters, you can call this the new era non-accountability. These are the tactics of socialist overthrows of nations that do not support Marxism. Creating the celebrity status of the ruling class leader is paramount in using the propaganda machinery of the left to promote the worship required for these dictators. The Obama’s of the world must have ignorant and submissive subjects who are oblivious to the manner in which they have had their freedoms stolen from them. The Obama White House relies heavily on the low information voter and a compliant media to trumpet their misinformation campaigns.

Hello to having your intelligence insulted. Goodbye to a responsible government that actually cares about its people. Dumping an illegal immigrant population with convicted violent criminals back into American society, in itself, should be considered a criminal act by this arrogant President.

Huh. Elks.... I never even knew they were racist. I think they're at least light brown, are they…See More
1 hour ago
0 Comments 0 Favorites

part of the economist cover, the second horseman from the left is wearing a mask and a corona on…
5 hours ago
0 Comments 0 Favorites

"8 minutes in. Nothing gonna top zigaboo brzinsky."
7 hours ago

James Roberts replied to Guardian of Scotland's discussion More fuel for the fire and evidence of a pre planned situation in regard to COVID.
"Goes well with the Dead Zone episode."
11 hours ago

James Roberts favorited Guardian of Scotland's discussion More fuel for the fire and evidence of a pre planned situation in regard to COVID.
11 hours ago