Out of these, they say the first cell arose, spontaneously, by accident. Unfortunately for their theory, this means that tens of thousands (minimum) of complex organic chemical reactions occurred, in a single microscopic space. In just the right order. There are no words to describe numbers so large as the odds against this ever happening. This process supposedly achieved what no group of scientists in any lab has ever been able to do. There is what is referred to by scientists as a "synthetic cell", but this is a severe misnomer (in truth, purposefully deceptive). What it actually is can be termed a "knockout cell" (and a clone), in the lingo of molecular geneticists. They took existing genetic material, and spliced genes together, one by one, until they were left with DNA that had only the genes necessary for survival. then they injected the DNA into the cell wall and protoplasm of another cell in which the DNA had been destroyed.

I think it reproduces by division as well, or they'd only have had it for a short time to study. But, other than that and eating, it does nothing else. What they used had few genes to start with. I don't think they'll ever create a functional cell wall. Dr. Garth Nicolson co-authored a paper on the complexity of the cell wall, I think it was in the late 1980s or early 1990s. It is a jigsaw puzzle of lipids (fats) and proteins, and it has vacuoles (like microscopic sphincters) built in, to admit nutrients and allow waste to be expelled. If the cell wall isn't just right, if the vacuoles don't open and close at the proper times, all the energy leaks out, and it will die. Or never live to start with. That paper was the most-cited in all of science, for 10 years. By the way. Synthetic cells only exist in science fiction. If they could, they definitely would.

Evolutionists try to cover for these glaring non-sequiturs, entirely inconsistent with the well-established scientific facts, by claiming the first cell wall was like a "micelle" (soap bubble). I guess using a French word makes it sound more sophisticated, as we've recently seen the word "dossier" used, lol.  But a bubble, even if the right chemical constituents are there, can not admit nutrients, nor can it expel waste. They try to cover for the extreme complexity arising by accident by saying it took a very long time. Perhaps thousands, or even millions of years. Sounds reasonable. However, even at below freezing temperatures, and in an environment devoid of life, every organic compound will eventually change into something else, unless it's coal tar.

Especially with moisture, other organic and inorganic compounds to react with, and the energy of electricity. And it would be even more unlikely if heat was not present, at least at physiological temperatures (as in the human body) Some organic compounds will react with themselves, given enough time, to produce polymers, etc. This is why the best prepper meals can only remain edible for a maximum of 25 years if unopened. And if oxygen is present, there is a well-known browning effect that occurs with organic material, like food left out in the open too long.

If this process somehow happened in the short term, then the rules of chemistry would be very different than what we know them to be, and our world would be a very different place, inimical to life as we know it. Same if it happened in the long term. And, keep in mind this all would have had to have happened quadrillions of times over, at least, before the odds were in favor of nature "getting it right" and producing a viable, reproducing organism. Nobody has ever observed this kind of spontaneous chemical activity in nature, or a laboratory.

One item that scientists point to a a possible proof of their theories on the first cell is the Miller-Urey Experiment, described here. 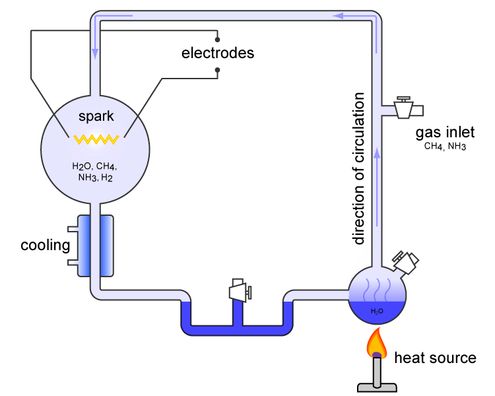 Into this apparatus were placed methane, ammonia and hydrogen. Produced were tiny amounts of amino acids, the building blocks of proteins. Drowned in a toxic sludge which would kill extremophiles (organisms that live in environmental extremes, like the heat and sulfuric acid from volcanic undersea vents) and superbugs without breaking a  sweat (by the way). They leave that fact out when pressenting this to schoolchildren and college students as supporting evidence for evolution. It is like saying one set out to build a laptop by hand, and ended up only being able to make the keys. In real life, the amino acids would have to accidentally bond with each other in just the right order (proteins can be from three to thousands of amino acids long), simultaneously. This would have to happen thousands of times over. And then the genes to produce those very proteins. By total accident.

And that's just the beginning. DNA bases and DNA itself, lipids, vacuoles, the cell wall, organelles, etc. would have to self-assemble, by accident. All tailor-made to live in the environment. And to reproduce. Everything would have to be nearly perfect, by accident. It would be as unlikely as an automated computer production facility spontaneously arising in nature, and starting itself. One wrong or missing metabolic or reproductive gene, one missing amino acid, lipid or the wrong concentration of inorganic chemicals, and it doesn't work. Not to mention all of this flies in the face of the well-characterized concept of entropy. Complexity does not appear in nature of it's own accord. Things break down into disorder.

It's like the theory of spontaneous generation. Early in the days of biology, before the facts of frog eggs and tadpoles had been observed by scientists, the theory held sway that they just popped out of holes in the ground, coming into existence by some mysterious, unknown principle.

From there, evolution has a lot more problems with it's theories and evidences, equally as troubling. But this will do, for now.

stormtruther - Thank you for the link.

this is an interesting article and also a good site

King Of Cups left a comment for James Roberts
"Thanks for friending me James. The 7 of Cups a very powerful card, lots of opportunities and…"
1 hour ago

James Roberts commented on Doc Vega's blog post Robot Companion Coming To Your Town Soon
"To round this subject out, an amusing and informative take on the opposition to sex robots by third…"
1 hour ago

Doc Vega commented on stormtruther's blog post Numerous reports in the Arab press have accused the US and Israel of being behind the creation and spread of the deadly coronavirus
"If you are going to believe what the Arab press says then you might as well believe that CNN,…"
4 hours ago