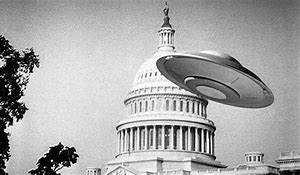 In 1949 Project Sign, a US Air Force unidentified aerial object investigations project was transformed into Project Blue Book. Its first director was Captain Edward Ruppelt, a World War II veteran of the B-17 bombing wings. In a fluid situation of unknown flying phenomenon that seemed to be often attracted to not only underground missile sites and test ranges, but also nuclear facilities, the US Air Force was forced to attempt to address public concerns and attend to the sightings validated by experienced observers such as commercial pilots and US veteran fighter pilots who were up against something they’d never seen before.

A new mystery seemed to have forced its way into the realm of sensation among Americans and the controversy began to stir over the origin of these unknown airborne vessels that outperformed the latest jet aircraft, caused strange electromagnetic disturbances and at times crossed paths with civilian aircraft at dangerously close proximity. As shocking as this ripple in the fabric of accepted reality had become there were strong opinions voiced among the highest ranking officers of the armed forces as to who or what they were dealing and whether or not they substantiated a threat.

In the 1950’s it was very possible that a person could get run out of town for reporting a UFO or a jet fighter pilot could find that his career was no longer going anywhere after his filing of an account over an unknown aerial phenomenon. Some civilians took it upon themselves to create privately run investigation groups and this prompted the US Navy to begin surveillance on individuals to find out what their findings were. One particular group of concerned citizens actually witnessed a secret US Navy missile launch that went awry. People like journalist, Donald Keyhoe, considered to be the father of UFO reporting a former Marine Major, an aviator, and assistant to Charles Lindbergh during World War II, who had sources inside the Pentagon became a thorn in the side of military authorities.

Keyhoe’s theories that the Pentagon already knew about UFO’s and were hiding intelligence and vital information from the public often angered the US Air Force top brass. Captain Edward Ruppelt mentioned Keyhoe in his book, “The Report on UFO’s” published in 1956 sarcastically commenting that Keyhoe could read General Roger Ramey’s mind when it came to what UFO’s were going to do next. Project Blue Book was being pushed hard for answers by the public, they were being threatened by a number of generals worried that it was a waste of the budget or could expose important experimental development, and then there was the unpredictable nature of the aerial enigma itself.

All the while impressive cases were being investigated and filed as it seemed that Director of Project Blue Book, Captain Ruppelt was gaining credibility and knowledge about who or what was behind the mysterious and persistent manifestation that evaded attempts at interception and created panic in many witnesses. By 1952 two films forced USAF researchers to take a long look at the reality of actual material objects flying over US air space that defied identification. Add the fact that Major Dewey Fournet had been present at the Washington National Air traffic control facility into the early morning hours tracking UFO’s that flew across White House forbidden air space and even hovered as if waiting for US Air Force interceptors stationed at Bolling AFB who came roaring in at 600 mph. attempting to make eye contact. When suddenly the unknown radar targets would simply blink out. Disappearing when pilots were in the area, then reappearing when the jet fighters exited those radar covered coordinates. When Pilot William Patterson made an aggressive attempt at intercepting the flying saucers did not disappear but began closing in on this F-94C jet. 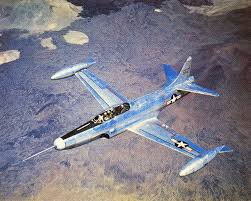 The nervous pilot’s voice heard on the intercom by Senior Radar officers and Project Blue Book official, Major Fournet, asking what to do next as he watched the “Bogey’s” looming closer to his aircraft stunned the radar technicians and officers on duty that night. A tense silence gripped the control room! Luckily, for Patterson the UFO’s backed off. His testimony during the following debriefing was classified and has never been revealed to this day. Patterson may have been the first pilot to come into contact with UFO’s that closely and live to tell about it. This would become a prelude to the infamous Robertson Panel meeting. 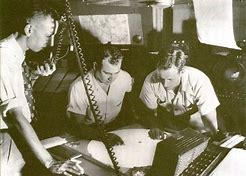 In Tremonton, Utah a Naval photographer out driving with his wife spotted unknown metallic objects in the sky giving off reflections as they flew overhead. He quickly uncapped and aimed his portable film camera at a formation of unidentified objects departing his location. He would be thoroughly debriefed by his superiors after turning in his report. At Beaver Falls, Montana a coach was up in the sports stadium press box when he spotted 2 unknown aerial balls of light flying over the town. He had to run downstairs to get his film camera but was able to shoot several seconds of footage. His film was sent to US Air Force and Naval intelligence laboratories for scrutiny. The two short film clips were considered solid evidence as was the radar tracking over White House air space. 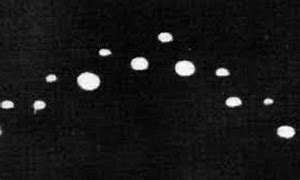 With Project Blue Book becoming a formidable element in proving the existence of UFO’s and gaining much respect within armed forces circles in 1953 the CIA sponsored a hearing known as the Robertson Panel. A group of well-known scientists, all experts in their fields of rocketry, aerodynamics, and jet aircraft development and the primary members of Project Blue Book, Captain Ruppelt, Major Dewey Fournet, and Doctor J. Allen Hynek would meet on this fateful occasion. With generals willing to back Project Blue Book with funding and also attach a well-known reconnaissance regiment to support the investigations something else happened. 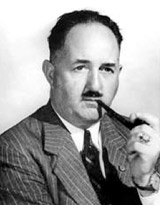 The collection of scientists reviewed the best cases presented by the Project Blue Book staff including the film clips, well studied still photos, the attempted intercepts by US fighter pilots, and the interviews of eye witnesses who were considered expert observers. The unexpected prevailed! The evidence was largely disregarded due to possible mistaken identification of other sources such as birds, unknown presence of conventional aircraft, or visibility conditions. Captain Ruppelt and Major Fournet were astonished and angered, Doctor J. Allen Hynek pleaded with the gathering to continue supporting the work of Project Blue Book, but the verdict had already been decided.

It was determined that Project Blue Book had not clearly revealed any sinister motives by the UFO and that further funding of the studies were unjustified. Project Blue Book would now become a public relations agency with any reports of technical value or of national security concerns to be handed up the ladder to Wright Patterson AFB for further study. The teeth had been removed from Project Blue Book and all of that hard work of Ruppelt and his staff had been for nothing! Discouraged, Major Dewey Fournet and Captain Ruppelt along with his junior officers requested new assignments. The CIA had gotten its way and an official investigative branch of the US Air Force was effectively compromised! Blue Book would continue as a Paper Tiger addressing occasional high profile UFO news with ridiculous explanations until 1969 when the agency was officially terminated. 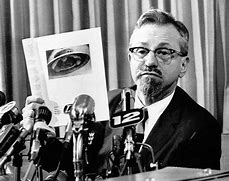 The US government had contracted the University of Colorado and Professor Edward U. Condon to conduct a study of UFO’s and review Project Blue Book case files for 18 months. According to Donald Keyhoe the study was a multi-million dollar scam with research team members under Condon actually admitting that the study had extreme prejudice against the subject and was not being objectively conducted. It was clear that the true agenda was to shut down the Project Blue Book program.

The fate of those too close to the truth

The untimely deaths of several figures in the UFO community should be noted. Captain Edward Ruppelt who had entered civilian life to work for a US defense contractor was pressured by the US Air Force to write another book disavowing everything he had written in his block buster 1956 release “The Report on UFO’s” widely considered to be one of the best inside exposures of a government cover-up, but whistle blowers like Ruppelt usually suffer consequences and so did he. In 1960 Edward J. Ruppelt died suddenly of heart failure. According to Donald Keyhoe, Ruppelt was so deeply hurt by the US Air Force’s draconian power play that his heart gave out. Others later on as the deaths of a US president, his brother, and even CIA directors that assassinations had developed such sophisticated methods of hiding behind seemingly natural causes would view Ruppelt’s death at the very least still being a young man to be an actuarial anomaly. 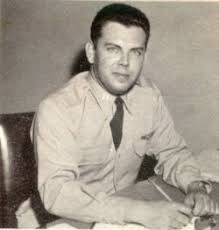 Chris of the Family Masters thanks!

Phyllis Maka commented on Phyllis Maka's blog post NOT ONE CORONAVIRUS HEADLINE ON DRUDGE WHEN I CHECKED THIS MORNING, THEY DROPPED THIS STORY LIKE A LEAD BALLOON
"Congratulations to THEM, they have succeeded in creating a world-wide demented mindset from what I…"
2 hours ago

James Roberts commented on Doc Vega's blog post An Incredible insight by a German Actor About Jews, their Relationship with Gentiles in Germany and How Hitler rose to power!
"Doc - OK, no problem. I did like his acting, although I could see the negative effects of soap…"
3 hours ago

Doc Vega commented on Doc Vega's blog post An Incredible insight by a German Actor About Jews, their Relationship with Gentiles in Germany and How Hitler rose to power!
"James, I'm not into the Young and Restless of General Hospital and all that trash that began…"
3 hours ago

Doc Vega commented on Doc Vega's blog post Deadly Strangeness in Southern Louisiana
"James, by the way I lived in parts of Louisiana from Baton Rouge to Alexandria to New Orleans and…"
3 hours ago

"Yep the actors are wanting and the play sucks."
3 hours ago

Doc Vega commented on Doc Vega's blog post Deadly Strangeness in Southern Louisiana
"James, good one! I think the green entity on the left far surpasses any feminine appeal I can…"
3 hours ago

Start video at 35:00 for context, runs to the end. Rousing, and applies in the good old USA just as…See More
5 hours ago
0 Comments 0 Favorites

James Roberts commented on Doc Vega's blog post An Incredible insight by a German Actor About Jews, their Relationship with Gentiles in Germany and How Hitler rose to power!
"Watched the first part, I'm guessing he didn't say Jews were behind usury, the promotion…"
6 hours ago

James Roberts commented on Phyllis Maka's blog post NOT ONE CORONAVIRUS HEADLINE ON DRUDGE WHEN I CHECKED THIS MORNING, THEY DROPPED THIS STORY LIKE A LEAD BALLOON
"Soon "catching a cold", "he caught a cold" will be a euphemism for being taken…"
6 hours ago

James Roberts commented on Phyllis Maka's blog post NOT ONE CORONAVIRUS HEADLINE ON DRUDGE WHEN I CHECKED THIS MORNING, THEY DROPPED THIS STORY LIKE A LEAD BALLOON
"stormtruther - Drudge is a Jew fag, in fact. Like a lot of the "New Right" or "Alt…"
6 hours ago

James Roberts favorited Phyllis Maka's blog post NOT ONE CORONAVIRUS HEADLINE ON DRUDGE WHEN I CHECKED THIS MORNING, THEY DROPPED THIS STORY LIKE A LEAD BALLOON
7 hours ago

James Roberts commented on Doc Vega's blog post Deadly Strangeness in Southern Louisiana
"The one pic does look strangely familiar, could be Chuck Schumer's wife with a "cucumber…"
7 hours ago