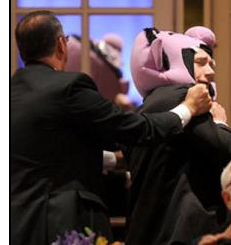 Activists repeatedly interrupted Murdoch as he gave a keynote speech at a downtown San Francisco hotel about how technology could help transform the nation's public education system.

"Equality in education, not privatization!" one woman shouted as security guards escorted her out of the ballroom of the Palace Hotel, which hosted the National Summit on Education Reform.

"Corporations own all the media in the world. Why should they not own all the education as well?" activist Joe Hill yelled sarcastically. Hill, who was dressed as the "Count" character from the TV show "Sesame Street," also was pushed out of the meeting room.

"Sorry to be the bad messenger, but this picture is fake. But I do believe every one there belongs…"
8 minutes ago

"A conceptual learning experience from todays lesson."
23 minutes ago