The Man Who Refused to Be King Part II 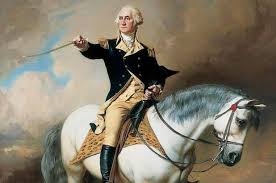 As a military officer George Washington fought in 3 wars commanding elements of the Continental Army and alongside the British during the French Indian War ending up as the Supreme Commander for the 13 Colonies once the War of Independence broke out, he became a seasoned leader. An excellent horseman as well Washington's ability in cavalry maneuvers was excellent. Unlike British generals or even his contemporaries, George was in amongst the fighting risking his own life sword in hand flailing away.

From the beginning of the war the British occupied Boston, a key port and right in the center of the Colonial merchant industry. Washington needed to remove the British by force or by negotiation. He had the upper hand with his forces and cannon batteries surrounding the city. When General Washington rode into the British camp he met with the commander of the English occupational force there. When told that Washington would take the city and was well in place to do so the British officer warned that if a siege by the Continental Army commenced he would order the city burned to the ground. 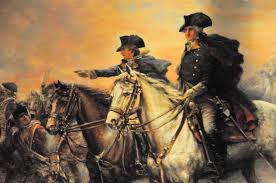 To fight another day

Wisely, Washington allowed the British to withdraw rather than taking the risk of a failed siege, losing casualties along with the battle, and perhaps seeing Boston burned down anyway. The president to be in the near future won a chess match with the British Army, he took possession of the town of Boston without firing a shot and saved the citizens who would have suffered loss of property and casualties as well. It was the ability to make decisions like this through out the war that kept Great Britain from outlasting the Americas in 6 bitter years of fighting.

More than just the enemy to contend with

General Washington only commanded in 9 major battles as he was constantly seeking financial support from the Continental Congress to keep his army funded for pay and supplies so they could take the war to the British. It was a never ending battle in itself! At Valley Forge some 2,000 of 12,000 fighting men died of exposure and starvation as General Washington pleaded with the Congressional delegation for enough support to feed and equip his men on that harsh winter.

George Washington only won 3 of the nine battles he directly commanded, but those 3 battles were major turning points in the war that changed the momentum from the British to the 13 Colonies. During his career George Washington fought in 200 battles, had his horse shot out from underneath him several times, but was never wounded not even scathed! After one battle Washington's uniform was removed for cleaning and repair and was clustered with bullet holes that somehow never touched him. His officers were amazed. 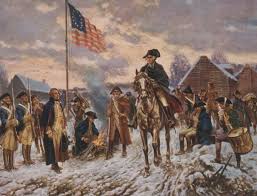 During the French Indian War as a chief of the tribe that fought the combined British and Colonials watched as time and again his riflemen fired at field officer George Washington and failed to wound or kill him. He ordered his braves to cease trying to hit him. He announced to his people that Washington must be the Great White Father prophesied by the Indian folk lore. Some people who doubt the existence of God might be well advised to consider that George Washington seemed invincible not only to his own men but to his enemies. Without this magnificent leadership it is doubtful the Continental Army could have withstood the British juggernaut. 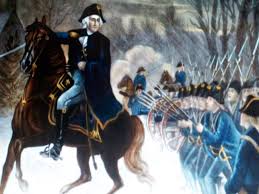 The paranormal visited the presence of General Washington often during his struggle to see that the 13 colonies withstood the British army and gained independence. At Valley Forge as his men languished in freezing weather low on rations or medical supplies, the great general had a visitation with fate and saw the future! Taking his favorite steed with him, Washington took a walk and then climbed down from his horse to pray for the miracle his fledgling army needed to survive through the winter and defeat their foe.

An Indian chief known to Washington years before startled George as he knelt in communion with God! The Native American leader assured the general that he would succeed and that the Colonies would eventually win against the British! When the Indian leader suddenly disappeared Washington remembered he had been killed in battle years before, but that was not all. As Washington used his hands to push the snow aside on the ground he saw a vision of a great nation that was to grow and become a world power. He saw America has an empire while being a force for good in the world.

George returned back to his command quarters, a 2 story house commandeered for the Continental Army where many of his officers were already planning to negotiate a surrender to the British. George Washington ordered a meeting with his staff along with his field commanders telling them he had important information. At the same time, Washington had awaited word from the Continental Congress on funding for his army yet no courier had arrived so far.

When his officers sat down expecting to hear their supreme commander announce that surrender was imminent instead they saw an inspired General who assured them that their cause would succeed and that the commanding officers were to begin projects to keep their men busy and motivated. When asked if all this had been thanks to some good news that had just arrived, Washington stated that he was absolutely sure of victory! His men unanimously agreed to obey orders and expect the best would be destined to come. The officers who had bitterly argued were overruled and followed Washington's directives.

On that same fateful night just before his pivotal meeting with his officer staff, Washington had brought his horse to the stable where a number of infantry men were trying to stay warm near a stove when Washington was confronted by one soldier who was delirious from a fever, drew his pistol and fired at point blank range. When the smoke cleared in the midst of the stunned silence Washington stood untouched although shocked. When the men assured him that the sick trooper who fired would be imprisoned and hanged, Washington told them to get the man some medical attention instead! Once again the men were astonished by Washington's level headedness and mercy.

At Valley Forge two miraculous events took place in one night that changed the complexion of the war! For someone to ignore the fact that divine intervention had occurred would be ludicrous! There is no other explanation. The witnesses were there, gave their testimony to historians years later, and the fate of a nation blossomed on that cold night thanks to General George Washington, Supreme Commander in Chief. Even today George Washington is still recognized posthumously as Commander in Chief of all US forces. "I bet you will be required to get a FLU SHOT to be ALLOWED to wait for your check. Hey King,…"
44 seconds ago

King Of Cups commented on King Of Cups's blog post Famous people who have Covid-19, I call bullshit...
"For sure this crock was definitely overcooked in the ol' propaganda crock pot cheeki…"
35 minutes ago

King Of Cups replied to steve's discussion That damn "snaily mail" It will take FOUR FKN MONTHS to get your FREE GUBBERMENT CHEESE/bailout check
"Here you are waiting for your crumb from the guberment's table."
39 minutes ago

"Hungry hogs at the endless trough. Trillions and trillions in the hole not to mention the…"
43 minutes ago

cheeki kea commented on King Of Cups's blog post Famous people who have Covid-19, I call bullshit...
"ha, ha I think they've over cooked this. Trying to Make us all  ~Believe~"
53 minutes ago

"Not locked up, thats just where they like to congregate. Work Safe won't allow any exit to be…"
1 hour ago