Ian Miles Cheong is as effective as Andy Ngo for daily reports on Antifa/BLM/RevCom (ABR) actions in the Pacific Northwest and elsewhere. I follow both of their Twitter feeds closely every day. Their reporting is better by far than anything seen on the MSM including Fox.

Because what occurs in the Pac NW might become a template across the USA, the evolution of ABR operations in that region bears close study. (I refer to them as ABR because Antifa and BLM are simply cover names for RevCom.us, the Revolutionary Communist Party of the USA. Never use your enemy’s preferred terminology when it’s just a disguise intended to soften their image.)
This is Ian Miles Cheong’s Twitter feed:
https://twitter.com/stillgray
This is Andy Ngo’s Twitter feed:
https://twitter.com/MrAndyNgo
On the night of July 29, ABR went on a road trip 110 miles south of their Portland base and stronghold to the conservative Eugene suburb of Springfield. The locals were not having it. It seems like ABR can only get away with rioting when they have a Communist mayor protecting them by keeping local police forces out of the area.
Ian Miles Cheong’s Twitter thread covers the action:
“Springfield, Oregon residents are taking videos and photos of all the Antifa and Black Lives Matter license plates and chant ‘Whose street? Our street.’ BLM agitators promise to be back tomorrow. Give the residents some back up if you can make it to the area.”
“The Black Lives Matter agitator, who wants to abolish the police, demands that the police help them leave. Pathetic.”
Go to Cheong’s Twitter feed and read all of the posts about the ABR expedition to Springfield and how the locals resisted them and drove them out. Below is just one sample, there are many short video clips of ABR attempting to riot in Springfield, and being beaten back by the police and locals.
https://twitter.com/stillgray/status/1288703574420021249
Also seen on the Andy Ngo and Cheong Twitter feeds: crude and basic IEDs (bundled major fireworks) have been used in Portland and discovered in Seattle. These IEDs can be expected to improve in their deadliness week by week. As ABR is rejected outside of their communist-sympathizing strongholds, I think the more angry and violent among them will turn to planting bombs. In my opinion, we shall see something similar to the overt SDS to covert Weathermen paradigm shift of the early 1970s.
https://twitter.com/MrAndyNgo/status/1288707581427380225 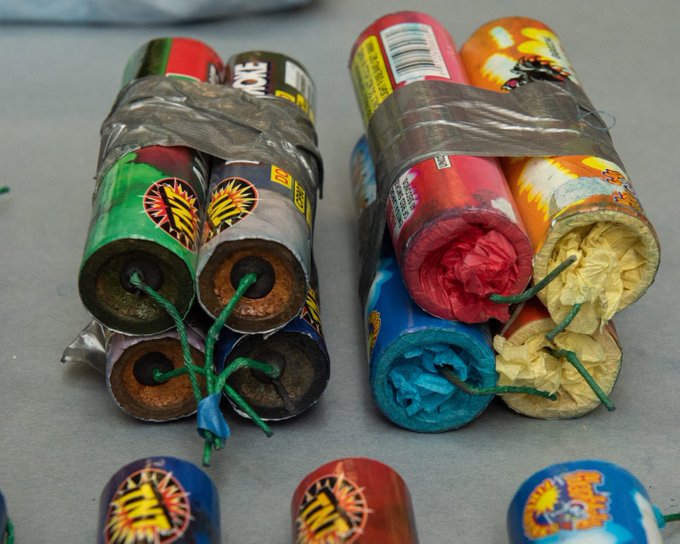 In the UK, Tommy Robinson had to flee his latest secret family home after it’s location was doxed and arson attacked. In the the USA, mobs have found the homes of conservatives including Tucker Carlson, forcing them to move to new homes where they are again threatened with doxing. As ABR frustration grows, I believe we will see not only mob harassment of conservatives at home, but actual arson attacks as happened with Tommy Robinson.
Harden your homes against attack by Molotov cocktails, or bricks followed by commercial-grade fireworks used as explosive/incendiary devices. If your home is attacked in the front by a mob, you will want to plan an egress route that does not use your front door, that will enable your family to move to safety and enable you to move unseen to a flanking position where you can engage the ABR terrorists. And yes, attacking people at home with the intention of burning them out or terrorizing them in the middle of the night is pure definitional terrorism. Plan accordingly.
Andy Ngo also has reports today about his being doxed while reporting the Portland riots and pointed out by a local reporter, so that ABR terrorists could attack his eyes with green lasers. The damage to his eyesight is unknown at this time.
Andy Ngo: “When I was reporting on Portland riots undercover, the Portland Mercury news editor, Alex Zielinski, was informed of my whereabouts by antifa sources who had been stalking me. She then stated my location publicly, endangering myself & those around me.

“As Zielinski knows, antifa have tried to kill me & have shown up to my family’s home. Yet, she stated exactly where I could be found to a mob of hundreds. Immediately antifa tried to blind me w/lasers. It was painful & I still have light sensitivity now. They then confronted me.

“I pleaded w/a local news crew to leave with them because I was about to get beaten or killed. Even though Zielinski & I disagree on politics, I would never try to hurt her. I’m airing this now because the public should be aware of how local journalists work hand-in-hand w/antifa.

“Zielinksi has a vendetta against me. Last year she interviewed a pseudonymous antifa informer who made the defamatory and false claim I was secretly working w/a right-wing group who brawled w/antifa at a riot. The lie was repeated everywhere.

“I was never reached for comment & to date have had no opportunity to respond to the pseudonymous accuser.

“It appears that now Alex Zielinsky is trying to get me killed because she was unable to stop me from reporting.”

(The alliance between some MSM reporters and the ABR terrorists is now undeniable. Plan accordingly.)

Central Scrutinizer left a comment for EDWIN
"Sup EDWIN, Glad ya made it... to 12160 ,...where you'll find an enormous collection of…"
5 hours ago

Central Scrutinizer left a comment for Travis Bins
"Sup Travis, Welcome to one of the few remaining digital representations of rationality, logical…"
5 hours ago

Central Scrutinizer left a comment for Daz
"Sup Daz, Glad ya made it,... here,...one of the few remaining vestiges of rationality, sanity,…"
5 hours ago

William S. Stickman IV... A name to remember. Discussing his recent judgment in which he strikes down 2 Pennsylvania lockdown measures, deeming them to be un...
7 hours ago
0 Comments 0 Favorites

Recently uncovered fraud allows us to disqualify any document. They all contain intentional…See More
7 hours ago
0 Comments 0 Favorites

"More of the kind"
9 hours ago

More behind the scenes jewish commie treachery on america

"Kevin Hurley is a British politician and former police officer. He was the Surrey Police and Crime…See More
10 hours ago
0 Comments 0 Favorites