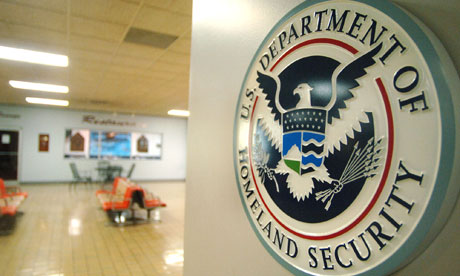 US cyber security chief Randy Vickers, who worked in the Department of Homeland Security, has resigned after a series of hacker attacks. Photograph: Jeff Gentner/AP

The head of the US body responsible for combating cyber-attacks has resigned unexpectedly following a string of online assaults on the CIA and other government agencies.

Randy Vickers, the director of the US computer emergency readiness team (CERT), stepped down on Friday, according to a Department of Homeland Security email obtained by the Reuters news agency.

According to Reuters, the email did not disclose any reason for Vickers's resignation. The Department of Homeland Security declined to comment. Vickers, director of CERT since 2009, will be temporarily replaced by deputy director Lee Rock.

Vickers's resignation follows a number of online attacks on government websites including the Senate, the CIA and the FBI. William Lynn, the US deputy defence secretary, revealed earlier this month that a foreign intelligence service had stolen up to 24,000 computer files from a Pentagon supplier in March – one of the largest successful cyber-attacks on a US government agency.

The hacker collectives Anonymous and LulzSec targeted state websites after US intelligence agencies vowed to clamp down on the groups, resulting in a string of arrests worldwide.

Sixteen alleged members of the Anonymous collective were arrested last week, as part of the investigation. Two British teenagers, 19-year-old Ryan Cleary and an unnamed 16-year-old, have been arrested in the past month accused of involvement in the attacks.

The unnamed south London teenager – thought to go by the online alias "Tflow" – was released on bail on Friday following his arrest on Tuesday.

Washington-based CERT is responsible for the protection of US government computer networks, including those of the Pentagon and Senate.

Phyllis Maka commented on Phyllis Maka's blog post Confirmed! Beirut Port was nuked by the same Evil Elites That Nuked Fukushima
"OR ARE YOU THAT STUPID?"
46 minutes ago

Phyllis Maka commented on Phyllis Maka's blog post Confirmed! Beirut Port was nuked by the same Evil Elites That Nuked Fukushima
"The emphasis is on the ISRAELI NUKING BUSINESS AS FOR FUKUSHIMA  THE ISRAELIS NUKED IN TWO…"
52 minutes ago

Central Scrutinizer commented on Phyllis Maka's blog post Confirmed! Beirut Port was nuked by the same Evil Elites That Nuked Fukushima
"Class valedictorian with a 151 IQ, so no, was gonna ask you the same question"
3 hours ago

Phyllis Maka commented on Phyllis Maka's blog post Confirmed! Beirut Port was nuked by the same Evil Elites That Nuked Fukushima
"Are you stupid?"
4 hours ago

Europe is committing suicide. How did this happen? In this video, Douglas Murray, author of The Strange Death of Europe, explains the two major causes of Eur...
4 hours ago
0 Comments 0 Favorites

Burbia replied to James Roberts's discussion Reason For Govt Support Of Riots
"Nothing these people do have a single purpose. Control of peoples lives seems to be a motivating…"
5 hours ago

In one of Tim Pool's recent videos, he outlined this scenario -Mayors and governors allow the…See More
6 hours ago
1 Comment 0 Favorites

Less Prone commented on Larry Flinchpaugh's blog post United States Covid 19 virus statistics:
"All death are classified as Covid-19 if the patient had tested positive for it regardsless of the…"
8 hours ago