WATCH: COP CALLED TO HARDEE’S TO REMOVE HOMELESS VET—INSTEAD OF ARRESTING HIM, HE BUYS HIM FOOD 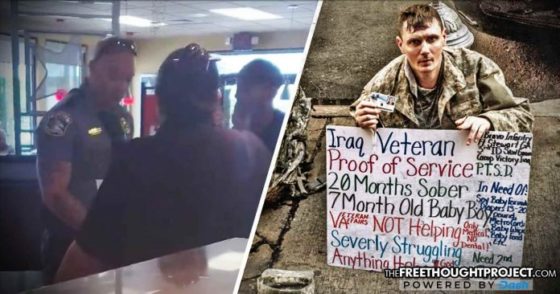 Myrtle Beach, SC – When police received complaints about a homeless veteran begging for money, the officer who responded could have aggressively demanded that the man leave the area, and then use physical force if he did not immediately comply. But instead, the officer did something unexpected, he bought the man a meal.

When Horry County Police officer CJ Mullinax arrived at a local Hardee’s Restaurant, he found a homeless man who just wanted a meal. Footage of the encounter was posted on Facebook by Victoria Paige Summer, an employee at the restaurant. She said employees were giving the man food and allowing him to hang around but that one unhappy patron decided to call 911 instead.

Leading by example, Mullinax arrived, had a simple conversation with the man, reached into his wallet, and bought him a meal. The video has now gone viral.

“Police were called to our restaurant today because a homeless man was asking people for their scraps to eat,” Summer said. “This police officer bought the homeless man food and handled the situation amazingly!”

While many individuals feel the need to film police encounters because they are worried about what could go wrong, Summer told WMBF News that she started recording because she was thrilled to see that Officer Mullinax “had so much compassion.”

At the time, Mullinax told ABC News that he hoped the public would see the interaction as his way to gain the community’s trust.

“Whenever I have interactions with someone, despite what they’ve done, I’m going to treat them how I would want to be treated,” Mullinax said. “We’re all human, we all make mistakes, but at the same time, it’s my responsibility as a cop to help fix anything wrong, and I want to do that in the most respectful way possible.”

The homeless man in the latest video has been identified as a veteran named “Donald,” according to a Myrtle Beach resident who told the New York Post that he is “the nicest guy.”

“He served in the Army from 1978-1981 then got out, worked in construction and then hit a wall which brought him to a point in his life that walked him down the road to homelessness,” the resident said.

OP Note: Gotta love the "Now Hiring" sign there,...OK then, this awesome Officer bought him lunch Mr. Manager, now it's your turn to be a human and go hire the guy...seems capable& willing..... Bet he doesn't... ~Central Scrutinizer

Jack Burns is an educator, journalist, investigative reporter, and advocate of natural medicine.

Contributed by Jack Burns of thefreethoughtproject.com.

The Free Thought Project is dedicated to holding those who claim authority over our lives accountable.

I live in a smallish 25K town.  We've had a homeless bum living here for at least 4 going on 5 years now.  One newspaper report on him had him arrested with over $30,000 in CASH and over $5,000 in gift cards.  He does not have a sign but just sits on the swale in front of several shopping centers and waves at the traffic!!!  He does not actively hold up a sign or approach any cars.  The folks in the cars have to chase him down to hand him money.  He is supposedly a pastor from NC who came to my town looking for his brother.  His brother moved to another state and obviously didn't tell him where.  The cops first arrested him for having his van's wheels going the wrong way when parked....and had it towed.  Now he has 2-3 shopping carts full of stuff.  Each time he gets arrested he loses his carts but then miraculously gets more and they are always filled with "stuff".  I looked him up in the court file at the courthouse and found he had an apt with a roommate and then was evicted for nonpayment of rent.  Hell, with $30,000 you'd think he'd buy a used car and rent an apt and live like normal folks....but no, I keep seeing him sitting in the swale still waving at cars saying God Bless you as they drive by!!!!  Gotta love this guy and his shtick!!

gotta hand it to this officer B-man, because of his astute concentration, finely honed spider-sense, and tactical prowess. The man in blue's natural instincts kicked in when he realized it wasn't his arch nemesis, The Hamburgler.... James Roberts commented on stormtruther's blog post Jennifer Aniston: Braless star leaves little to the imagination in cream satin gown at the SAG awards...no, its a real headline!
"Burbia - Ever read Inside the L.C. by the recently-departed Dave McGowan? Nobody can read his…"
45 minutes ago

richard J Lacy commented on Dr. Frederick Meekins's blog post Greatest Story Ever Told's Opening Act Tweaked To Advance Leftwing Agenda
"Free the criminals, crucify the Good guys! Seems very much like nothing has changed with that mode…"
54 minutes ago

"Where there are few weapons in the hands of ordinary folk, there seems to be the most trouble!…"
57 minutes ago

"If only current racketeers saw the light, we may have peace on earth."
1 hour ago

"This leaf had something to say as well."
2 hours ago

Burbia commented on stormtruther's blog post Jennifer Aniston: Braless star leaves little to the imagination in cream satin gown at the SAG awards...no, its a real headline!
"Wait, did I miss out on the slut farm? Where does the time go?"
2 hours ago

"Rad. The infamous hacker known as 4 Chan is now a marketing agent in a 3 piece suit for the KKK?…"
2 hours ago

Burbia commented on TommyD's group The Chuckle Hut
2 hours ago

steve commented on stormtruther's blog post Jennifer Aniston: Braless star leaves little to the imagination in cream satin gown at the SAG awards...no, its a real headline!
"Dang lori, why the hate for Jennifer. even a "celibate  no fun  person has to admit…"
2 hours ago

"Ok. Gotta admit Waddlesworth crushes arriving on the scene with this. Oh yeah, here's some…"
4 hours ago