I like this move. It gives lie to those who say that Nazis are only agent provocateurs and Feds. And, it eliminates the pressure relief valve of speech. If we can't speak, there's only one thing to do. And I don't mean terrorism or even guerrilla warfare. The impact of those, even if we had nukes, chem or bio weapons at our disposal, are far too small. And they would be co-opted and spun against us. The Nazis are going to introduce technology that changes the whole political game, and pretty much everything about human life (inside info, you heard it here first). In a good way. I predict that within the next five years, The United States will be completely under the control of National Socialists, the rest of the West soon to follow. We'll clean up this huge mess, but from that point onwards, it will be our way or the highway, we'll set some common sense rules. Like no lending of money for interest, transparency of leaders' lives, limits on how much wealth an individual or family, or other group can amass, etc.

"Major online neo-Nazi meeting grounds are being nuked by hosting sites that want nothing to do with connections to militant white nationalists. Meanwhile, several of them have regrouped on Twitter."

The group that I've belonged to for the past 39 years, the SS Action Group. Formed with the immediate successor to the original American Nazi Party, The SSAG provided security for demonstrations by the National Socialist Movement. The increased stresses that the conservatives have suffered recently at the hands of the left, they are child's play compared to what Nazis have endured for several decades. If you haven't been there, there is no way for you to meaningfully understand how we've sacrificed. 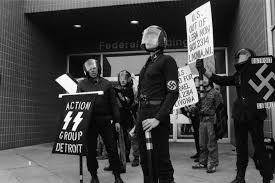 Larry Flinchpaugh commented on Larry Flinchpaugh's blog post Another Democrat Jerk Trump Hater
"Yes, I know this was in 2017.  It still represents what is still going on."
41 seconds ago

"Not that hard to figure out...After sloMo Joe is President in 30 minutes from now....WE GO TO WAR!"
1 minute ago

Central Scrutinizer commented on Old Denmark's status
"SO who did what to who here????...any info?"
20 minutes ago

Perhaps channeling the spirit of the Soviet NKVD, leftists are now literally calling for a new…See More
1 hour ago
0 Comments 0 Favorites

cheeki kea replied to Less Prone's discussion Antifa Directly Linked to
"Oh my perfect God it's True !! Antifa.com leads straight to Biden ! I just tried it out and…"
1 hour ago