I don't like using Infowars, and especially Michael Snyder for a source, as the former is heavily incentivized to unneccesarily panic people, and the latter is always forecasting the apocalypse, just around the corner. However, since I have heard this aspect (reinfection) cited from early on in this virus thing, it does give me a chance to expound on the possible reasons.

This doesn't strike me as something people would make up, as part of a pandemic fairy tale. Reason being it doesn't exactly make one crave for the vaccine. If it just comes back after you are "cured", what's the point? I have a couple ideas, though. One I posted about here, that there are two infectious agents, a virus and a mycoplasma.

If a mycoplasma is involved, it would have to be engineered by humans, as normally these microbes take at least several months to sometimes multiple years to do damage. They divide very slowly compared to other organisms. I suppose engineering could change that, or introducing mycoplasma DNA into a virus. Viruses multiply rapidly.

There are tools and databases for recognizing proteins, genes, chromosomes and sections of DNA (and RNA) that are homologous (having the same sequence) as these biochemicals in other organisms. And mycoplasma DNA has been well-characterized. Still, as they're working from the premises that they are, there is no motivation to check for these possible relationships.

One way for molecular biologists involved in bio-warfare to get around these sequences being recognized is outlined here. Most DNA is a code which is a recipe for proteins. A combination of three letters, such as GAT or CTA (called a "codon") code for one amino acid . There are 20 natural amino acids, from which proteins are made. There are multiple codons for each amino acid, as can be seen below (amino acid abbreviations have two lower-case letters). Bio-warfare engineers could use genetic sequences that do not occur in nature, but produce the same proteins, thus avoiding homology recognition. 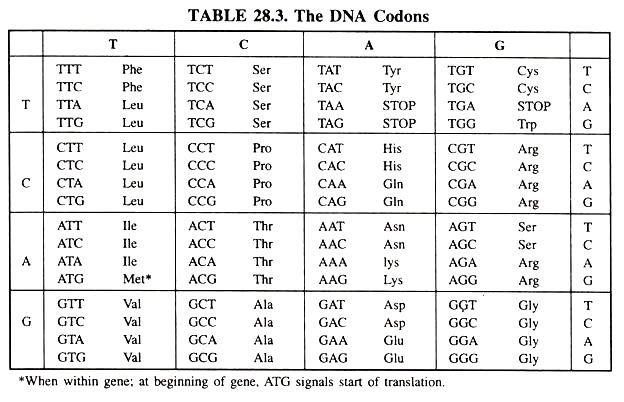 The reasons I suspect this model is true is that the damage to the lungs, by scarring, is said to be occurring by way of a "cytokine storm", which is an exaggerated response of the immune system. As occurs in autoimmune disease, such as mycoplasmas cause. Likewise, hydroxychloroquine is an immunosuppressant drug, and the most recent (small) study I've read indicates patients were symptom-free within 8 to 12 hours. That's awfully quick for a "cure". Sounds more like a temporary suppression of symptoms.

However, the CDC's guidelines for hospitals, that deaths should be attributed to Covid without tests, and that Covid should be listed as the primary cause even when it is only a contributing factor, etc etc, hopelessly and purposefully confuses everything about the problem, if all this is even real. Makes me want to throw my hands up in the air and give up trying to think on it. As does themasses of tests that turned out to be only 20 or 30% accurate, the Americans' obstinate refusal to begin testing until lately, unmanned testing centers all over the US, etc.

Something isn’t adding up

The mysteries surrounding this COVID-19 pandemic just keep getting deeper and deeper.

When you catch a virus, you are not supposed to test positive, fully recover and test negative, and then some time later start testing positive again.

But this is actually happening in an alarming number of cases, and scientists are absolutely baffled by this.

The information that I am about to share with you is quite disturbing, and hopefully scientists will eventually be able to explain to us precisely why this is taking place.

On Monday, headlines all over the globe breathlessly declared that 51 coronavirus patients in the South Korean city of Daegu had “tested positive again” after supposedly fully recovering…

FEARS have been raised that the coronavirus may be able to remain in the body and “reactivate” later after 51 recovered patients tested positive again.

The patients, from the city of Daegu, South Korea, had all spent time in quarantine while recovering from the virus, but were diagnosed again within days of being released.

(Video of Fauci here, didn't copy, see at link, scroll down)
Owen Shroyer exposes Fauci admitting he expected a pandemic during Trump’s administration yet he did nothing to prepare the country. At this point, nobody knows how to explain this.Could it be possible that the tests were faulty? Could it be possible that these patients became infected a second time? The researchers that studied these patients are rejecting both of those explanations and instead are floating the theory that the virus “reactivated” in these particular victims…

The 51 cases were identified as part of a study conducted in Daegu, the epicentre of the outbreak in South Korea, by a team of epidemiologists from the Centers for Disease Control and Prevention.

The center said it did not believe the patients had been reinfected, but that the virus had remained at undetectable levels in their cells and later “reactivated”.

But of course the truth is that they don’t really know why this is happening.

And similar cases have been popping up all over China for quite some time.  In fact, “second-time infections” have been documented “in many regions”…

As China releases more patients who have recovered from the coronavirus, there are an increasing number who are testing positive for the second time. The State Council ’s Joint Prevention and Control Mechanism said last Saturday that second-time infections have been reported in many regions, including Guangdong, Sichuan, Hunan, and Hubei province, where Wuhan is the capital city.

Needless to say, it is likely to have a tremendous impact on public policy if scientists are able to confirm that “second-time infections” can happen very rapidly following a full recovery, and so it is absolutely imperative that scientists get to the bottom of this mystery as rapidly at possible.

So far, researchers in China are reporting that “between 3 and 10% of cured patients became reinfected” shortly after fully recovering from the virus.  The following comes from Fox News…

As many as 10% of recovered coronavirus patients in China tested positive again after being discharged from the hospital, according to a report.

Doctors on the front lines of the outbreak in Wuhan, China — where the virus emerged — reported that between 3 and 10% of cured patients became reinfected with the illness, though it’s unclear whether they were contagious the second time, the South China Morning Post reported.

Talking with someone who has excellent sources to Chinese Cable TV apparently the coronavirus morphs into a new strain that reinfects those celebrating their recovery and may even kill them 2nd time around. They say in China that the virus is now in it's 3rd incarnation already. You might recall that many people who have recovered from diseases will test positive because they still carry the weakened or dead pathogen once their antibodies have defeated the organism.

cheeki kea commented on James Roberts's group Fervent (but Polite) Debate
"Do you know you're 10 times more likely to receive a cat meme than a dog meme, and nobody…"
1 hour ago

cheeki kea commented on stormtruther's blog post “We’re in the bizarre position of wanting Covid to stay, at least for a little while. But cases are declining."
"And track n' trace hasn't got off the ground in any efficient way at, It's all hyped…"
2 hours ago

cheeki kea commented on Doc Vega's blog post The True Meaning of Memorial Day Part II
"We're all right in our opinions. There was one life lost in WW 1 from my distant family, I was…"
3 hours ago

stormtruther commented on Doc Vega's blog post The True Meaning of Memorial Day Part II
"Casualties were of no importance to Hunter-Weston provided the objective was met, [14] but he…"
3 hours ago

stormtruther commented on Doc Vega's blog post The True Meaning of Memorial Day Part II
"each to their own :)"
3 hours ago

cheeki kea commented on stormtruther's blog post The Belgian minister looks like a walrus that has washed up on a hot beach many hours ago and is ready to explode
"Oh look here's our chief microbiologist who provides advice and support to the PM, straight…"
4 hours ago

cheeki kea favorited stormtruther's blog post “We’re in the bizarre position of wanting Covid to stay, at least for a little while. But cases are declining."
4 hours ago

Mr. Sizzle commented on Doc Vega's blog post The True Meaning of Memorial Day Part II
"Hey Doc,  I’m not trying to be confrontational at all, but you should really research…"
5 hours ago

Mr. Sizzle favorited stormtruther's blog post The Belgian minister looks like a walrus that has washed up on a hot beach many hours ago and is ready to explode
5 hours ago

cheeki kea commented on Doc Vega's blog post The True Meaning of Memorial Day Part II
"Well, we Must remember the fallen and Honour them on Memorial and Anzac Day. I have seen the last…"
5 hours ago

Mr. Sizzle commented on Doc Vega's blog post The True Meaning of Memorial Day Part II
"ALL wars are bankers wars for profit and control.  I am not trying to disgrace the men and…"
6 hours ago