Why Many Experts Say a Global Venezuela Event is Inevitable It began in 1913 when the Revenue Act was passed under extremely questionable conditions during the Christmas vacation time for the Congress. At that time Philander Knox, former lawyer for several of the rich elite families and acting Senator of Pennsylvania at the time took up a vote to bring the Federal Reserve central Bank back into power and enact income taxes. Keep in mind this was the equivalent of an attempted recess appointment with few representatives that were present on Capitol Hill.

As Philander Knox took a vote count of available state representatives many opted to pass, which did not mean to approve but only to say that they would not make a decision at this time, regardless, according to sources, Knox counted these pronouncements as a vote in favor of. The 16th Amendment made an unprecedented move that violated the intentions of the original founders of our nation which had been never to tax wages or earning of individual citizens as this was an un-apportioned tax that did not accurately apply according to equal duty allowing for population distribution of the tax burden. The founding fathers had already gotten a taste of taxation without representation thanks to the impositions by the British occupation and never wanted citizens to be burdened as such again.

President Andrew Jackson had abolished the European Central Bank in the US for 75 years and had survived many assassination attempts ordered by the European banking families, but “Old Hickory” survived and America flourished under the formation of independent banks using gold and silver as supporting assets to back US currency. As America grew and also fostered international trade so did its prestige and influence without the need of a central bank controlling the monetary and credit policies that, in the future would cause great calamity in US markets!

However, thanks to President Woodrow Wilson, a progressive and an advocate of Eugenics, the Revenue Act of 1913 was allowed to be proposed, and under the aegis of being essential to the stability of money supply and credit availability, without the knowledge of the American people, fiscal enslavement of our banking and currency was achieved. In the hands of a few elite cartel of foreign banking families the fiscal control of America had been deceptively attained. Not only that, but according to their founding charter, the American tax payer would be the one whose funds would be used as collateral should a colossal economic collapse occur.

How long did financial stability last as a result of the resurrection of a central bank under the new Federal Reserve? From 1913 to the Stock Market Crash of 1929 marked the amount of time that the illusion of fiscal security took to dissolve and send millions of Americans into a crisis as their investments and life savings were rendered worthless in record time. No bail out, no FDIC insurance helped them as many committed suicide and the Great Depression loomed over America as one of the darkest periods in our history. From 1766 to 1913 America had done just fine without a central bank dictating monetary supply and credit availability not to mention the added burden of income tax!

Thomas Jefferson had once stated that any government who allowed a foreign entity to have control of its banking system would no longer be a sovereign nation! The Federal Reserve and its terrorist arm, the Internal Revenue Service did just that! Not only using volatility to cause high and low volumes in the markets, but also the hedging that would be needed in order for privileged investors to profit off the uncertainty and changes in prices. So, as many lost money and those who gained, so did the bankers who manipulated policy and created an environment where stability was the enemy and volatility paid in risk and reward.

Norman Dodd, fresh out of college, a young banking and investment advisor attended a meeting of Morgan Bank officials discussing the Great Depression and where it would all end. Norman was tasked by the board of directors to take on an investigation into the causes of the Great Depression and to report back when his findings were completed. It took a year for him to collect evidence and evaluate just what had actually happened. When Norman returned to his bank another meeting was assembled to hear his findings.

Strangely, all of the irregularities he had discovered that led to potentially illegal violations did not seem a concern of the principals who had attended. After his presentation Norman Dodd was excused and then later called to speak with his bank manager who informed him never would the US banking system run on sound banking doctrine again, that the United States would be in a perpetual state of bankruptcy. Norman was instructed that he would be well taken care of, to be quiet about his findings, to go and play tennis, golf, spend time with his family and to look forward to his new position at the bank.

Yet, weeks turned into months and after a year, Norman had become restless and also disturbed by the news of so many Americans suffering who’d lost their livelihoods and now their dignity. Desperation on a nationwide scale compelled Norman Dodd to once again approach his boss. Unable to accept the terms of his isolated position, Dodd, who had a cream puff job, resigned and quickly found out he was black balled from ever getting another banking office position again. He would now have to work outside the banking community as an investment advisor, but years later he would again be called upon to participate in a historic investigation!

Thus began the legacy of fiat money printing, loss of gold or asset backed currency, and a new era of banking where the Federal Reserve, acting falsely as a government agency would create money out of thin air then charge the United States corporation with interest on the credit it lent US Treasury to print a money supply and pay the debt through the taxation of the American people, utilities, retail purchases, fuel taxes, communication taxes, interstate commerce taxes, property taxes, tariffs, investment income, and corporate taxes! As time went on the burden of taxation thanks to the lack of fiscal control and irresponsible spending would lead to Americans working several months out of the year just to pay their income taxes.

Enslavement of the American citizen due to a privately owned foreign entity in charge of US banking policy was complete! As more out of control spending by a federal government that has created a huge welfare state that has cost trillions over the decades only a matter of time awaits until a total fiscal collapse of the United States monetary system emerges. As the buying power of the US dollar further devalues. Years after he had left the presidency and suffered a stroke, Woodrow Wilson lamented that he had unwittingly allowed America’s future and fiscal stability to be governed by an elite few.

Banking families like the Rockefellers, the Rothchilds, and the Vanderbilts to name a few adopted their true roles internationally as world bankers who owed no allegiance to any nation as they were not under the restraints of any country’s laws. This control of the money supply along with taxation would allow these people to socially engineer and arrogantly dictate the outcomes of the lives of millions of people who unknowingly labor under the control of a cartel disinterested in their well being yet in charge of their buying power, their social policy, and their freedom to pursue life as they saw fit. Creating billions out of thin air, floating an international economy, and then bringing in billions through the interest charged nations as partners in the IMF as well as income taxes confiscated from millions of Americans has set the inevitable tone for an uncertain and catastrophic future. 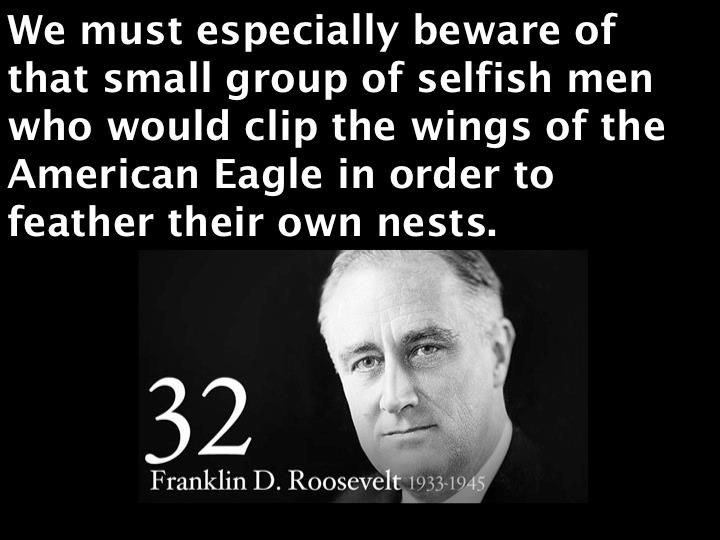 More to come in Part II.

Less Prone favorited Doc Vega's blog post How Disinformation has Been Used to Change our Modern Society We Were Warned a long Time Ago!
21 minutes ago

James Roberts commented on James Roberts's blog post Russia’s Rght-Wing Opposition Tries To Gain From COVID-19 Crisis
"Zhirinovsky is a Jewish Zionist, by the way. While Putin often has been encircled by The…"
56 minutes ago