You Can't Deny Hillary's Dirty Tricks In This Election 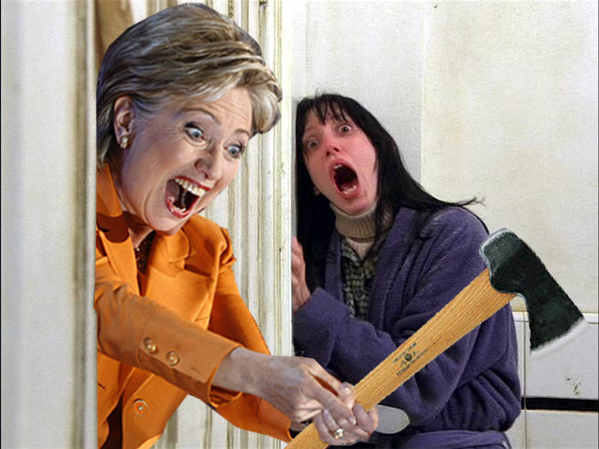 More Of Hillary's Dirty Tricks
As Wiki Leaks continues to divulge more e-mail dumps, as Project Veritas keeps releasing more film footage that would incriminate any normal citizen, and property vandalism against GOP properties is perpetrated we see the growing desperation of the Clinton camp. Having an election campaign staff of some 700 personnel and record numbers of donations in the hundreds of millions, still the former Secretary of State still cannot seem to convincingly out distance Donald Trump in this controversial presidential election. Even when Trump employed on one tenth of the staffers that Hillary has and defeated 16 GOP opponents the race appears to be a virtual tie. Depending on which poll you want to ascribe to either candidate can be leading. Most experts are in agreement that the race is neck and neck despite doubts over the criteria used by pollsters to achieve their percentage findings.
If they only knew
If the low information voter was aware of the degree of corruption inherent in the Justice Department, FBI, mainstream media, and the Democratic Party election organization the race would be well within the hands of Donald Trump, but Americans are lazy, apathetic, and too self involved. One could argue that US citizens are in such a struggle to survive under the botched Obama White House economy that they are not paying attention, yet when college students interviewed on the street by people like Howard Stern's radio talk show, or the Jesse Waters World on Fox they can't even provide the names of either vice president on either side of the coin much less the actual presidential candidates! Is it just that they're Millennial or is it simply the portrayal of a lethargic American public who deserve exactly what they get when it comes corrupt leadership? One thing can be assured, the Democratic Party greatly benefits from the uninformed voter who never bothers to fact check or question the end result of destructive White House policies.
Tass and Pravda
The US media has been Hillary's undying companion. They have covered every questionable accusation aired by women who have come forth after thirty years of silence, can't remember when or where, or that certain flights that they claimed to have attended that when researched didn't even exist at the time of the alleged infraction. Yet, you won't hear from ABC, NBC, CBS, MSNBC, or CNBC about the authorization to unleash paid violent agitators with a mission to start fights at Donald Trump rallies-$1,500.00 per thug along with a free cell phone. You won't hear much about how in Lubbock, Texas when voters cast their ballot form a complete GOP ticket on an electronic machine that the vote would end up reflecting Democratic preference. Names of the dead have turned up prominently for Hillary while Democrat operatives are busing in thousands of illegal aliens and refugees to cast their votes. Remember that in 2009 shortly after President Obama was inaugurated Valerie Jarret announced to the DOJ that the White House would not prosecute voter fraud. These illegalities will not be reported by the US media.
Legalizing fraud
With the Democrats having defeated Motor Voter Laws in many states under the false aegis of racism when these same poor under privileged down trodden impoverished people who can afford their cell phones and their tattoos, will most definitely produce a photo ID when claiming their welfare checks, food stamps, or other government assistance whenever required to. Apparently legal identity is just not a priority when you're voting for the president of the United States even convicted felons will get a shot at casting their votes now under Democratic rule!
Back stabbed
Could the Speaker of the House, Paul Ryan, and the Republican Party have shown proper appreciation for Donald Trump having brought a record 14 million voters over the to the side of the GOP in the primaries-many who most likely would not have voted that ticket? No, of course not. When a candidate runs on vanquishing a corrupt system and threatens the DC establishment of course the original cut and run guys of the GOP will stab their nominee in the back! Why, because regardless of how badly the economy, national security, or race relations get in the US for hard working citizens they-the DC Establishment-will continue to do what they do, enriching themselves as the people suffer! Where's all the Super Pac money that was supposed to have been raised for the Trump campaign?
Rigged? You Betcha!
While the US media is largely composed of former Democrat operatives, cabinet advisers, and liberal strategists like George Stephanopolous of ABC and David Axelrod it genuinely appears that as Donald Trump has pointed out that the system is most definitely rigged. Brent Bozelle of MRC has clearly defined media bias 91% of coverage being negatively reported while supposed journalists having donated $400,000 to Hillary Clinton and only $$3,600.00 to Trump. The Donald Trump witch hunt in fully underway as the US media practically has ignored Benghazi, pay or play under Hillary's State Department ethics violations, Clinton's e-mails compromising national security, as usual we are told to forget about it, move on, nothing to see here! Of course, if the GOP had committed these numerous acts of negligence and blatant violations of due process the up roar from the biased US press corps would be deafening while the ghost of Joseph Stalin beamed with his bloodthirsty smile upon his progeny embedded in the heart of America.

Jct: Have all the proof you want. Hillary gets the cops with the guns and there's nothing you can do about it but moan.

MAC replied to MAC's discussion POST ELECTION UPDATE #32: More Troops Heading To DC, Mission On Point
"I was thinking the same thing, Scott McKay is thinking, Trump may have re-inhibited the original…"
1 minute ago

Waking up is an Inside Job

Probably True As Joe Must Awaken The War Machine

"A large convoy of U.S. military personnel headed into Syria on Thursday along with hundreds of…"
37 minutes ago

cheeki kea replied to MAC's discussion 5 Evil Things Biden Plans to Do as President
"Good that Mr pseudo-PRESIDENT's so upfront to promote abortion as it means it's Failing !…"
4 hours ago

"How brazen, he told us up front.....and the enablers did their deed."
7 hours ago

A guiding principle in Stalinist Soviet Union and other totalitarian governments; "Those who vote…
8 hours ago
1 Comment 0 Favorites

"Looks like a zipper bible to me.  Just sayin', without more than what I see I…"
11 hours ago