Senator Richard H. Black - The US and NATO don't care how many Ukrainians die

Russia Ukraine War: "We don’t care! The United States and NATO, we do not care how many Ukrainians die. Not civilians, not women, not children, not soldiers....

Can you see how the money/debt circles have their war machine intertwined with them in a Satanic embrace?

It is always the strongest countries that get the useful idiots installed be they druggies, geriatrics, perverts, peds, money gluttons, sociopaths or psychopaths its all be bring you Down if you don't "fit" into Their "culture compass". They like to use humiliation and victimisation, hoaxes, lies, and deceit. If there is no push back then they win. It is true Every country is measured in the culture wars. It is Individualism V collectivism (for the greater good) and they Don't like countries of 'Individuals',

What is the outlook for a country whose leader is a drug addict?

"On August 25th, a drug dealer was detained in Kiev. According to Ukrainian media reports, the man was engaged in the supply of drugs for deputies of the ruling party of Vladimir Zelensky, Servant of the People.

A 48-year-old man was identified Yuriy Chernetsky. According to the local prosecutor’s office, he systematically sold cocaine in the capital of Ukraine. More than 20 bags of cocaine, as well as money, ammunition and scales were seized in his car.

Ukrainian media claimed he supplied cocaine to the president to the deputies of the Zelensky’s party."

If you listen to the party video carefully you hear people saying "jauhojengi" (English "flour gang") and another saying "otin linkut" (English "I took a clean cut"), another is telling how good it feels following "kiitos samoin" "thanks likewise".These are clear reference to the use of drugs, more specificly cocaine. We have drug addicts running a country at war and another in Finland that is provoking Russia.  The corporate media is trying to downplay the "jauhojengi" to mean drinking of "jaloviina" a bewerage half brandy and half vodka, but it is a drink you wouldn't see people in the age group under forty to ever touch.

The "war" is not going well for the NWO or their puppets. When the fighters sent there come back dead as we had happen here recently it doesn't inspire hope and that's when people see with their own eyes that they support a Losers battle of pointlessness. 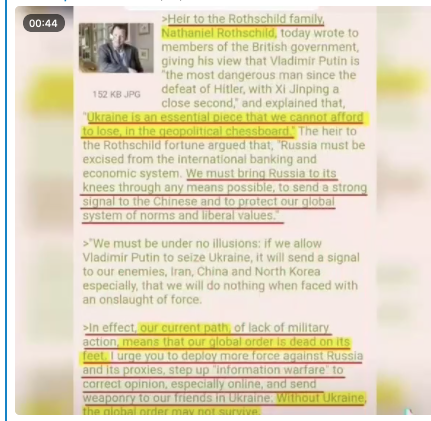 LP - NATO is the military arm of the Satanic Globalists.  I would expect nothing else but evil.

For once a politician says the truth. They are sacrificing Ukrainians in their power games. A blood sacrifice to Satan. He even compares it to a foot ball game. Total evil.

This is the reality.

cheeki kea replied to Parrhesia's discussion US military aircraft circled Nord Stream incident site in September
"Wow they are not just hammering down on Germany but all Europe will suffer. "
3 hours ago

"TUCKER CARLSON: What really happened to the Nord Stream pipeline? "According to the Canadian…"
22 hours ago