The 5 Angels of the 5 Continents 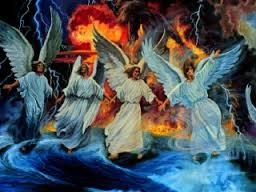 The 5 Angels of the 5 Continents
by Samuel Doctorian August 16,1998
I was here alone in a house on the Isle of Patmos for several weeks to
pray and seek the Lord. I found a little chapel - St. Nicolas's Chapel - where
no one ever goes. I went there and poured out my heart before God.
I wondered if the Lord would ever send a tenth angel?
I'd seen angels nine times before - in England, in Belgrade,
Yugoslavia, in Amman, Jordan, in Jerusalem, and angel that delivered
a woman from being hanged in upper Egypt. I saw the ninth angel in
Beirut in the midst of war. He physically awakened me at 3:00 in the morning
and told me to get out of the country immediately. I am grateful to the Lord
until today, I don't know what might have happened to me if the angel had
not come.
The FIRST ANGEL said
I have a message
for all of ASIA.
Harvest time has
come in Israel and all the way to Iran.
Then I saw that the second angel had a sickle in his hand,
and he said,
" Harvest time has come in Israel
and the countries all the way to Iran." I saw Turkey and
those countries
that have refused Me and refused
My message of love shall hate each other and kill
one another.
I saw the angel raise the sickle and come down on all
the Middle East countries.


Blood and Fire I saw Iran, Persia, Armenia, Azerbaijan,
all of Georgia, Iraq, Syria, Lebanon,
Jordan, Israel, all of Asia Minor full of blood.
I saw blood and fire  all over these countries.

Nuclear weapons used in many of those countries.
Smoke rising from everywhere.
Sudden destruction, men destroying one another.

"Israel, Oh Israel, the great judgment has come. The church,
the remnant, shall be purified.
The Spirit of God shall prepare the children of God.

'I saw fires rising to heaven. This is the final judgment. My church shall
be purified, protected and ready
for the final day. Men will die from thirst.

Water shall be scarce all over the Middle East. Rivers shall dry up,
and men will fight for water
in those countries."

The angel with the sickle shall reap the harvest.

The THIRD ANGEL said
Ungodliness all over Europe.
The FOURTH ANGEL said
Innocent blood has been shed.

now, and the end has come.

As the angel began to pour from the bowl in his hand,
I saw tremendous icebergs melting, floods all over Canada and North America, all the rivers flood, destruction everywhere.

I heard the world market collapsing with mighty earthquakes,

and New York skyscrapers were tumbling,

I saw ships in the ocean sinking. I heard explosions
all over the north country.

I saw the angel pouring over Mexico and the Atlantic
and the Pacific oceans joined together.

A great part of north Brazil covered with water, the Amazon
River turning into a great sea.
Forests destroyed and flooded. Major cities in Brazil destroyed,
earthquakes in many places.

As the angel poured, great destruction took place in Chile
and Argentina as never before.

Days are coming when I will punish the idols of Babylon
and her whole land will be put to shame.
All her slain will fall in her midst. Then heaven and earth
and all that is in them will shout for joy
over Babylon, for the destroyers will come to her from the north.

Indeed Babylon is to fall for the slain of Israel, as also for Babylon
the slain of all the earth have fallen.
Jeremiah 51:47-49

The ONLY time in history when homosexual "marriage" was practiced
was during the days of Noah.
That was the final straw that led to the Flood. Jesus said 'as in the days of Noah,'
look for my return
(paraphrased). Massachusetts and California courts by a one-judge margin
redefined what marriage
has always been in every culture and every religion for 5,000 years of
recorded history.

According to the "Babylonian Talmud" (the book of rabbis' interpretation
of the scriptures 1,000 years
before Christ), there was only one time in history that reflects where we
are right now, when men
were given in marriage to men, and women given in marriage to women.
Many claim America is the end time Babylon. Gay Marriagem Janet Folger:

Then I saw the 5 angels standing around the globe lifting up their hands
and their wings towards heaven and saying, "All glory to the Lord of heaven
and earth. Now the time has come and He will
glorify His Son. The earth shall be burned and destroyed. All things shall
pass away.
The new Heaven and New Earth shall come. God shall destroy the works
of the devil forever.

I shall show My power, how I will protect
My children in the midst of all this destruction.

The angels went out in 5 directions,
they already have started their duties. Thank you sweet sister!  God bless you too <3

Never discount prophecy... it's nothing to be messed with. Thank you Sweetina. I  was just having a deep discussion with my son Kai about this. In Revelation it talks all about this if people are open to read and have understanding without doubting.  But you know what it says... "in the last days... shall come mockers...."

THose who are planted will not fear.

Amen PH!  My son was raised in the admonition of God, he now calls himself atheist. But, he knows better.  I will remember yours when I pray for mine.  Yep, lots of stuff comin girl, stay ready. <3