Myths and legends about monsters seem to have entertained man’s superstitions and fears for thousands of years. From the folklore of the Kraken to the Loch Ness Monster, from the Yeti to the Skunk Ape of the Florida Everglades, it seems that humans have a need to acknowledge the existence of a monster! It seems monsters fulfill that need to satisfy the quest to uncover the unknown, thrill the story telling audience, or are the deeply hidden fears that haunt our psyches. For whatever the reason the legendary monster will always be a part of the human imagination.

Even though there are myths that are the basis for overactive imaginations or stories children quiver over there are indeed real monsters alive and well not only in the wilderness because at times they venture too close to home. These are the predatory species that are not supposed to be so big and imposing, that according to biologists should not be that large or inhabit the areas that scientists consider too far from their normal habitat. We will explore such real live accounts of these everyday animals that qualify every bit as monsters though they are not the figment of some script writer’s imagination for a horror movie.

In 2001 a story came out on the web about a horrific incident that happened in Alaska. Over a period of weeks several hikers who were tourists disappeared in close proximity to each other. A local resident who owned an AR-15 had vowed to do a little investigating and began hunting for whoever or whatever may have been causing the disappearances. Being an experienced hunter he began inspecting wild life trails and the typical hunting grounds of the local wildlife. After a couple of days the hunter picked up on a huge set of paw prints larger than any bear he’d ever seen. The enormous tracks clearly led down into a river bed. What he stumbled upon made him turn sheet white and tremble in fear as he stared up at the tallest bear that world may ever have seen in modern times. With a dark brown coat of fur, piercing black beady eyes, it seemed a true freak of nature that would have had a voracious appetite. Even though most animals have an instinctive aversion to humans only overcome by a person mistakenly threatening a mother’s cubs or a senior or sick bear merely hunting for the easiest prey, this behemoth didn’t appear to have any reason to be eating people other than to feed its huge mass. Standing at the height of a 2 story cabin this bear from hell was probably an unusually large Grizzly!

As the story goes

First hearing the breathing of the giant beast he then spotted the enormous figure of the apex predator. It did not growl or roar and did not even charge, but it did begin slowly walking nearer toward the shooter and his buddy. He fired his AR-15 long rifle several times hitting the animal once in the skull. He was uncertain if he could have brought it down or stopped it from charging him if it gave pursuit, but the bear fell to the snowy ground and died. He took several photos of himself holding the huge paws and sitting alongside the fresh carcass. Kodiaks and Polar Bears are the largest predatory land animals in the world, but this bear was a record breaker and a true natural monster! Authorities autopsied the giant to see if the remains of at least one known missing person were still in the digestive tract. And they were.

The story has morphed several times into supposedly being that two young US Air Force personnel were dropped off to do some deer hunting and encountered the bear in a creek. They had arrived from nearby Eielson Air Base on Hinchenbrook Island in Cordova Sound. Reportedly stumbling upon a huge bear that was hunting for salmon the hunter waited for the huge predator to clear a tree log where it would expose its vital areas. The supposed 12 ft. 6 in. sixteen hundred pound grizzly ended up actually being 10 ft. 6 in. and weighing closer to 1,200 lbs. which is still a very formidable animal. It took 2 shots to the front of the head to stop the bear in its tracks and 4 more bullets from a .338 Winchester magnum to make sure this giant of the wilderness was finally dead.

Back in the 1970’s a bizarre story in Men’s Saga magazine appeared. Apparently during the excavation of a construction site in Thailand a huge snake was uncovered and accidentally run over by a tractor. What workers found on the site allegedly was a 57 foot long python with 5 human bodies inside, both adult and children. A photo showed the monstrous reptile stretched out on the jungle grounds with the bulges of the bodies showing from the inside of the snake! Several men stood along the length of the beast posing with the real life monster! To date, the largest known snake in Asia was about 32 feet long while one specimen at a zoo in Kansas City Zoo was measured at 22 feet in length! In reality, there have been people in Thailand and Indonesia who have been attacked and bitten by reticulating pythons with 2 accounts of a human (woman and child) being devoured whole. Normally, due to their heat sensing capability and vibration detection nerves they are thought to steer clear of human villages. 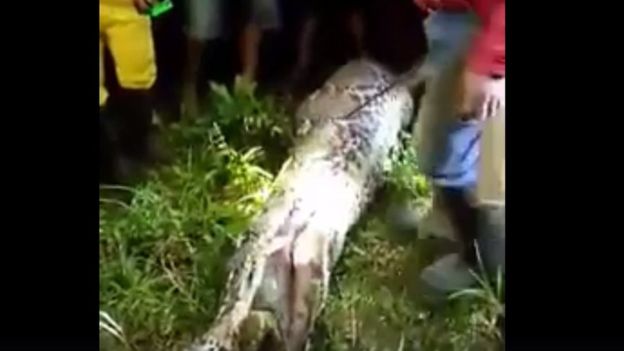 Monsters from down under

In Australia of all places there are many legendary accounts of two gigantic animals that strike fear in the hearts of the Aboriginals as well as the English descended Aussies who swear there is a dangerous and large species of predator native to the continent that was never extinct due to the Ice Age. Australia is a huge expanse of arid and wild terrain. Much of it may have never been explored by modern man. Huge tracts of inhospitable wilderness serving as cattle ranch acreage of undeveloped government lands make up the largest percentage of the inhospitable continent!

A menacing real life monster known as the “Razorback” according to witnesses, is said to roam the wild “Outback”. Settlers living in modest shacks claim that the wild hog or boar is as big as a house and capable of flattening a dwelling by simply running it over! Having huge tusks this feral hog on steroids strikes fear in the hearts of many native Australian residents who live far outside the confines of the modern cities along the coast. The interior of Australia is hot, treacherous, and unforgiving. In the minds of the locals there is little doubt that this beast is at large and ready to strike whenever it decides to. Giant wild pigs have their origins in British farm animals brought over from Europe and once landed upon the “Land Down Under” those that escaped began to transform rapidly into a feral state. The US is heavily populated with them.

Fatality of a hunter

Giant wild pigs or boars have been reportedly shot and processed in places like Conroe, Texas, Louisiana, and in the state of Alabama with smaller species that travel in packs who thrive in Oklahoma and Texas.. Anywhere in the southern United States this destructive species can be found furrowing the land, eating crops, and attacking some livestock and local wildlife such as deer. Several people have been reportedly chased and even gored by these beasts! One hunting guide and trophy hunter residing in Dallas, Texas had hunted all over the world from Tigers on safari to Lion in the veld of Africa. He made a living taking novice hunters out in the wilderness to track and hunt game animals and even bear in Alaska. The sportsman had survived many charges by bear and big cats, but had never been hurt. Until, he was hunting wild pig in the Piney Woods and lowlands of Louisiana. It was there he met his fate. Firing at a charging wild boar he missed and as the animal rushed past him one of the tusks ripped through his side.

The big game hunter had met his doom much closer to home than he could ever have imagined as opposed to all the exotic locations he had hunted in the world over. He bled to death before he could be transported to a local hospital for treatment!

If eye witness reports can be believed

Australians have reported seeing what appears to be a supposedly extinct species of prehistoric giant lizards who roamed the island freely thousands of years ago. The only thing that limited their size was the amount of resources in the environment. These lizards on steroids would have rivaled the largest predators of the Jurassic Period. The Megalania Prisca is related to the modern day monitor lizard. These giants ranged free in grasslands, coastal shores, and into the rugged interior. They had no natural enemies and hunted all animals that resided on the topography of the huge island. So, why are some people saying there are signs that maybe a few of this specimens still exist? Kills sites consistent with big modern day lizards like the Komodo Dragon, impressions on the grounds that are fresher than fossilized, and a few sightings make one wonder if yet another real life monster still dwells alive and well in the arid countryside of Australia.

Let me go on record as saying that I'm not for shooting bears unless it would be to save my life. That being said, I'm probably just talking to a wall.

cheeki kea commented on stormtruther's blog post The world gets dumber by the day.  Morrisons Supermarkets to the fore. (Panadol?)
"Big Mall "Rationing" - 'Sales' are found in the fine print, often as…"
31 minutes ago

Phyllis Maka commented on Phyllis Maka's blog post No Title
"And THEY ARE THE PASTY 'WHITE' HYBRIDS NO LOVE FOR REAL PEOPLE AT ALL."
2 hours ago

Phyllis Maka commented on Phyllis Maka's blog post Kenya Installs The First Solar Plant That Transforms Ocean Water Into Drinking Water February 23, 2020
"America can use the bucket & small stone if they know how, at the rate water is being locked…"
2 hours ago

stormtruther commented on stormtruther's blog post The world gets dumber by the day.  Morrisons Supermarkets to the fore. (Panadol?)
"I can think od better ways to go than the slow breakdown over weeks as my liver goes into…"
3 hours ago

stormtruther commented on stormtruther's blog post The world gets dumber by the day.  Morrisons Supermarkets to the fore. (Panadol?)
"In Victoria I can only buy two packets of 100 at a time, thats 50g of…"
3 hours ago

James Roberts commented on Doc Vega's blog post Imprinting: When Humans Become the Blueprint for Animals in the Wild
"Excellent post, Doc. Thank you for posting, a pleasure to read after a long work day. Life is often…"
5 hours ago

James Roberts favorited Doc Vega's blog post Imprinting: When Humans Become the Blueprint for Animals in the Wild
5 hours ago

James Roberts commented on James Roberts's status
"steve - Yes I know, I was just trying to be funneh. Thank you, stormtruther."
5 hours ago