The Rise of Russia and the 'End of the World'

"What the darkness cannot possess, it seeks to destroy" 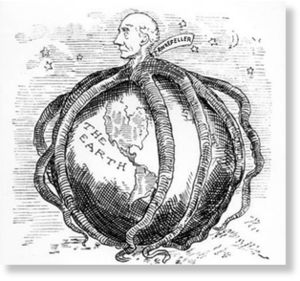 probably read all sorts of theories that seek to explain the causes of the 'new cold war' in which we find ourselves. From the embarrassingly simplistic "Putin's a Hitler" offered by the Western press to the more nuanced idea of an 'energy war' between US-Europe-Russia. The truth about why we are where we are right now, as a species, however, is actually fairly simple. But to understand it you'll have to ditch the idea of a 'new cold war' andreplace it with 'the 120-year-old war that never ended'.

If you like your history condensed and relevant to current events, then read on.

Over 100 years ago, in 1904, one of the founding fathers of both geopolitics and geostrategy, Oxford University graduate and co-founder of the London School of Economics, Sir Halford Mackinder, proposed a theory that expanded geopolitical analysis from the local or regional level to a global level. Geopolitics is the study (by people in positions of power) of the effects of geography (human and physical) on international politics and international relations. In layman's terms, this means the study of how best to control as much of the world - its resources, human and natural - as possible. When you or I think about the world, we think of a big, complicated place with billions of people. When the 'elite' think of the world, they think of a globe, or a map, with nation states on it that can, and should, according to them, be shaped and changed en masse.

Mackinder separated the world into just a few regions.The 'world Island', and area roughly comprising the interlinked continents of Europe, Asia, and Africa.The offshore islands, including the British Isles and the islands of Japan.The outlying islands, including the continents of North America, South America, and Australia.The most important of these, by far, was the 'world island' and in particular what he called the 'heartland', which basically means Russia. Mackinder said that whoever controls the 'heartland' (Russia) controls the 'world island' (Eurasia and Africa), and whoever controls that, controls the world. It's a fairly self-evident analysis of the situation because the great majority of the world's population and resources are on the Eurasian continent, and holding a vast northern position on that landmass - with your rearguard protected by an impassable frozen ocean - gives you the prime vantage point, or 'higher ground' if you will. 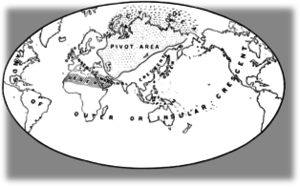 Mackinder's geostrategic map of the world

Mackinder probably arrived at this conclusion as a result of the British experience of Empire. The British had a large empire on which 'the sun never set' (and the blood never dried), and while the British elite made a lot of money, and caused a lot of suffering, by expropriating the resources of other peoples, they were never able to truly 'rule the world' because the 'heartland' (Russia) was not conquered and made a subservient state of Western powers, largely due to its massive size and the fact that Russia had long since been an Empire itself.

In 1904, Mackinder's ideas (shared by his contemporaries) were already common currency among the anglo-American elite of the day, who sought global domination by way of the prevention of any competitor to the United States. Russia was that natural potential competitor, again due its size, resources and imperial history. So even before the turn of the 20th century, the US elite, in league with their British co-ideologues, were busying themselves with the task of 'neutralizing' Russia as a threat to their plans for global hegemony. As Mackinder published his ideas, US and British political, industrialist and banker types had already embarked on the process of 'regime change' in Russia by way of one of the 'offshore islands', specifically, Japan.

In 1898, Russia had agreed a convention with China that leased the Chinese port of 'Port Arthur' to Russia. At the time this was Russia's only warm water Pacific seaport (and it was as strategically important as Crimea is to Russia today). Both the British and Americans were concerned about the close relationship between Russia and Germany (Tsar Nicholas II and Kaiser Wilhelm II of Germany were cousins) and the possibility that France might join them in a triple anti-British alliance. To the British and Americans this was a clear "threat to the international order".1 To thwart Russian intentions in Asia, in 1902 Great Britain and Japan signed the 'Anglo-Japanese alliance' which stipulated that if either Japan or Great Britain were attacked by more than one enemy they would support each other militarily. This was effectively a green light from the British for Japan to go to war with Russia if necessary, safe in the knowledge that neither France nor Germany (Russia's allies) would intervene and risk war with Britain. From this point on, Japan effectively acted as a protector of British interests in East Asia. 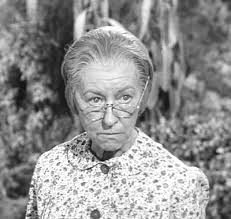 Git out yunder and git that thang ta runnin'! Times a wastin! My pleasure Hollywoodb;)

NOOOOOOOOO....can't be the end of the world yet....ain't got the car back together yet ;)

Mr. Sizzle favorited steve's blog post If the WEST is gonna be saved then the FAMILY unit must be saved
58 minutes ago

"Hey Storm, This is the advantage these prix have on us, we have self control and a code of conduct.…"
2 hours ago

steve commented on Doc Vega's blog post The Danger of Ignoring Red Flags Part II
"Hey All , Men and women are completely different/opposite one has an INNY and one has an OUTTIE,…"
3 hours ago

James Roberts replied to James Roberts's discussion Economic News - Store Closings 2020, 2019, and Past Four Years - Mike Rivero
"Come on, it's not like retail workers are members of AIPAC or anything. Learn to code, or…"
5 hours ago

Relevant video starts at 1:49:18In this year, 1218 stores have closed, according to a major payment…See More
5 hours ago
1 Comment 0 Favorites

James Roberts commented on Doc Vega's blog post The Deadly Coronavirus and the True Cause!
"Doc - In the book, The Gods of Eden by Wlliam Bramley, he recounts stories from broadsheets from…"
6 hours ago

James Roberts favorited Doc Vega's blog post The Deadly Coronavirus and the True Cause!
6 hours ago

Chris of the family Masters commented on stormtruther's blog post How Sunscreen Could Be Causing Skin Cancer, Not The Sun (Kids here are getting rickets FFS)
"Slip, slop....flop."
7 hours ago

Chris of the family Masters favorited stormtruther's blog post How Sunscreen Could Be Causing Skin Cancer, Not The Sun (Kids here are getting rickets FFS)
7 hours ago

"Doc, I know the issue of Trump is contentious, but I can't agree with you. Nothing on…"
7 hours ago

stormtruther commented on stormtruther's blog post How Sunscreen Could Be Causing Skin Cancer, Not The Sun (Kids here are getting rickets FFS)
"Both my parents lived to 90 and they both folded on their own terms, I intend to do what they did…"
9 hours ago