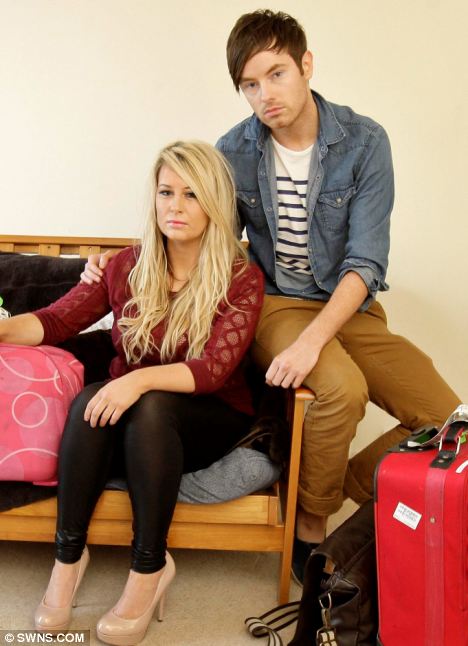 Expat:  Is it worth it?  Coming to a country on vacation where the State watches and interprets every move you make, and can throw you in jail on suspicion of thinking about doing something wrong during your holiday should make non-Americans think twice before visiting the US.  Here is another story that sounds like it comes from some old iron curtain repressive  Eastern European regime, but unfortunately it is from the "Land of the Free, Home of the Brave".

Leigh Van Bryan, 26, and Emily Bunting, 24, were planning a holiday in America but are now banned from entering the country, spent hours with Homeland Security interrogation and have been deported.  When they arrived on their flight to Los Angeles, they were immediately arrested, thrown in jail and began their nightmare holiday.  What was Leigh's and Emily's crime:  they made some jokes on Twitter.

Offending tweet: Mr Bryan told security officials that 'destroy' is slang for party in the UK, but that was not enough to convince them

In the UK, when someone says they are going to destroy a place, as in "let's go downtown on Saturday night and destroy the place", it means to get trashed and party.  So when Brian wrote in his Twitter account about his upcoming vacation to a friend, "Free this week, for quick gossip/prep before I go and destroy America", what he meant was that he was coming to America to party (as you would expect from a 26 year old single guy).  His friend and everyone else in the UK would take it that way.  Later, Leigh sent a tweet to a friend saying  "3 weeks today, we're totally in LA p*ssing people off on Hollywood Blvd and diggin' Marilyn Monroe up!"  This was a direct quote from a stupid TV show, Family Guy, and was meant as a bit of a joke (hey DHS, young people tend to make silly jokes).  Very few people would believe that Leigh would actually spend his vacation time digging up the skeletin corpse of a beauty queen that died more than fifty years ago.   But in today's America, you can never make a joke, no matter how silly, because Homeland Security is watching you.

After throwing the couple in jail upon arrival in the US, Homeland Security went through all of their belongings looking for a couple of shovels.  "It's just so ridiculous it's almost funny but at the time it was really scary. The Homeland Security agents were treating me like some kind of terrorist,"  Leigh reported after he was deported.  Emily was accused of planning to be Leigh's lookout during his twisted crime on Marlyn Monroe's corpse.  "I almost burst out laughing when they asked me if I was going to be Leigh's lookout while he dug up Marilyn Monroe. I couldn't believe it because it was a quote from the comedy Family Guy which is an American show," Emily said after her deporting.

Leigh reported once he returned to the UK, that Homeland Security officials told him, "You really f***** up with that tweet, boy," before handcuffing and putting him in what he described as a "cage" inside of a van. He said he was then transported to a prison with other border offenders.

Their journey (or holiday) did not end well.  After extracting confessions from Leigh that he indeed made the offensive Tweets, the pair were immediately put a plane for deportation back to the UK.

Most Americans are still under the illusion that they are not in a Police State where common human rights and even common sense are not ignored.  Two lessons for everyone that this holiday adventure demonstrates:  (1) Do not Tweet anything that a below average intelligence thug could interpret incorrectly (same for Facebook and any other social network), and (2) non-Americans should think carefully before deciding to come to the US to have a fun holiday.  I believe that everyone should cancel any Twitter or Facebook account they may have, because the age of innocence is over.  They are watching you.  You have been warned.

USA is doing a very good job at destroying its self..

Never underestimate the power of authoritarian stupidity/ It'll bite you in the ass every time.

Can only say one of my aunts knew a couple back in the mid-80's that was detained and then deported cuz the answered honestly on the question "have you ever smoked marijuana" while checked up on in a rutine gestapo check the biggest mistake was being honest. LESSON LEARNED

What a GREAT commercial for tourism! THANKS Dept. of Homeland Insecurity!

'the machine' had noticed the offending word, it's human slaves are not programmed to question, it's decision is final .

"The Gov has no compassion for any individual or group of people in this country. They are already…"
2 hours ago

"Blm types are low IQ thugs, who have no understanding of constraint, logic, reason, understanding,…"
5 hours ago