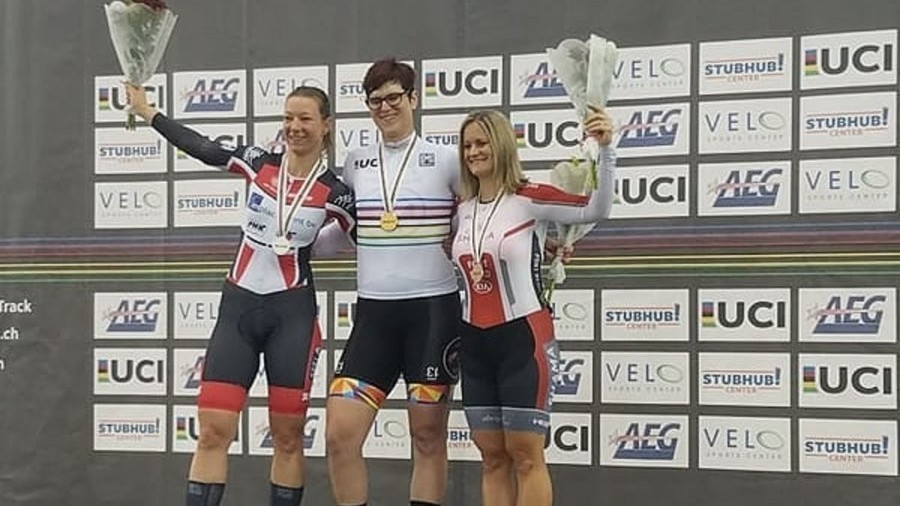 © Instagram / rachelvmckinnon
Canadian Rachel McKinnon finished ahead of the field at the women’s sprint 35-39 age bracket at the world cycling championship on Sunday. Many have praised her achievement, but some say it was cheating, since she was born male.

McKinnon is the "first" transgender woman ever to win gold at the UCI Masters Track Cycling World Championships. The event was organized by USA Cycling and took place in Los Angeles under the auspices of the International Cycling Federation (ICF).

Before the final race, McKinnon set a world record in the quarterfinals – which only stood for 10 minutes.

I broke the 200m WORLD RECORD this morning. It was my first indoor 200m and I have to admit that my 11.92 was significantly slower than I was doing outdoors in the summer. I still need… https://t.co/B2AVmn6aDq

She celebrated her victory by posting a photo of herself on the podium with the silver and bronze medalists.

This crap is not going to fly anymore, and I for one welcome our overlords passing laws that make it a crime to state facts and truth, it just means we can get this party started sooner.

I have a burning rage inside that cannot be quenched and I know I am not alone.

"What do you mean, a nose? Rossy de Palma Ruvén Afanador ruvenafanador.com"
1 hour ago

"A spontaneous outburst, and uncontrollable eruptions of laughter by a show host resulted from an…"
3 hours ago

"Unifarians = Homoborgenesis . That's what this pic. calls out. It's within a realm of…"
3 hours ago

Caroline Farrow on GB News discussing her arrest by Surrey Police after receiving alleged vexatious reports made to police over online activity. This channel...
6 hours ago
0 Comments 0 Favorites

tjdavis commented on Doc Vega's blog post Texas Under Democrat Attack
"They have already destroyed Texas..  The fond memory disappeared with the kelp in Barton…"
11 hours ago

With so much news of losses and gains Across the Ukraine - Russia Warzone, it is necessary to look at the real situation at an individual level. Avdiivka is...
14 hours ago
0 Comments 1 Favorite