The Labor Department released the inflation report Wednesday and while any fair-minded person can tell the economy is far from looking up, President Joe Biden has well and truly embraced Orwellian dystopian doublethink and, instead of saying “2+2=5,” declared 8.5 equals zero.

While holding a ceremony Wednesday to sign the PACT Act that, in part, addresses the healthcare needs of veterans who suffered illness or injury from exposure to burn pits, Biden attempted to draw a win on the consumer price index (CPI) coming in at 8.5 percent for the month of July. That number was indeed a drop from the year-to-year metric that marked a 40-year high in June at 9.1 percent, but it was also a far cry from what the president claimed.

“Before I begin today, I want to say a word about the news that came out relative to the economy. Actually, I just want to say a number. Zero,” he boasted. “Today, we received news that our economy had zero percent inflation in the month of July. Zero percent.”

“Here’s what that means: While the price of some things go up–went up last month–the price of other things went down by the same amount. The result,” Biden claimed, “zero inflation last month.”

According to Fox Business, the reported 8.5 percent was 0.2 percent lower than forecasts had predicted for July, but core prices still rose 0.3 percent to 5.9 percent over the previous year.

As depicted in a chart from the Bureau of Labor Statistics, CPI has spiked since Biden took office and the slight decline will likely barely register with consumers whose real average hourly earnings dropped 0.5 percent in July from June and 3 percent on an annual scale despite the president’s claim of increased wages.

'We had ZERO percent inflation': Biden dazed and confused after Jul...

Kamala Harris: “Today, we learned that last month our economy had zero percent inflation. In July, we saw a drop in gas prices and a range of other goods, like clothing and airfares and household appliances.”

The Hill on Twitter: ".@VP Kamala Harris: “Today, we learned that l...

Can anyone anywhere name one thing that REALLY WENT DOWN, going from 2$ to 5$ then down to 4$ doesn't really count as going down or is this some more of that modern renaming and playing pretend that seems to be trending .

It must be true Joe said so.  lol

“The Party told you to reject the evidence of your eyes and ears. It was their final, most essential command.” ― George Orwell, 1984

One month of necessities rising and some non-essentials going down in price from all-time highs and they're all on board with this nonsense. 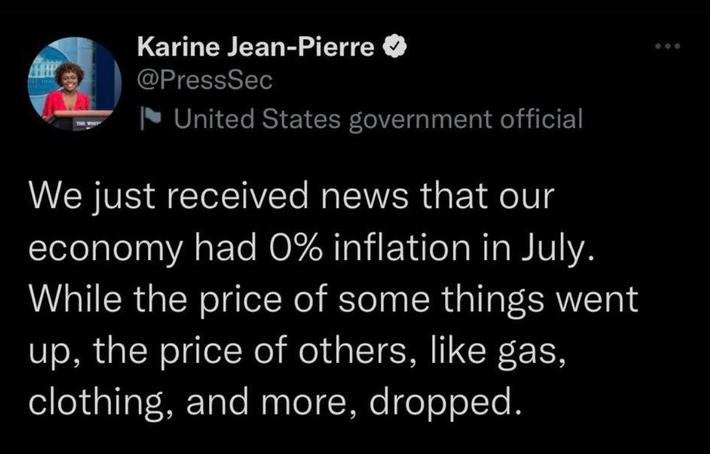 The footage is allegedly from tonight.SUPPORT THE CHANNELChannel has been demonetized, therefore ads won't and shouldn't be playing. You can support the chan...
9 hours ago
0 Comments 0 Favorites