left- Wanda Sykes, a lesbian, instructs young lads not to say it.
The relentless attack on Caucasian Christians has reached NHL hockey locker rooms where coaches are being reprimanded and fired for "homophobic" or "racist" remarks made in the heat of competition a decade ago.  The Cabalists are determined to stamp out any sign of testosterone among their prospective slaves.
Western society has been subverted  by a satanic cult based on Cabalism, the creed of the people who control government credit (currency.)  This satanic cult works by enfeebling and perverting its members, so they can be controlled and exploited. Homosexuality is usually caused by fatherlessness. Its promotion is part of the long-term Cabalist (Communist Jewish & Masonic) attack on m/f gender, marriage, and the nuclear family. But more importantly, homosexuality is a major factor in our satanic possession.
Homosexuals are being exploited to destroy gender. Your human rights are under attack. They're promoting homosexuality as the social norm. It's working. The percentage of American adults identifying as lesbian, gay, bisexual or transgender (LGBT) increased to 4.5% in 2017, up from 4.1% in 2016 and 3.5% in 2012 when Gallup began tracking the measure. It's probably 5% now -that's 16.5 million people.
In the UK, schools have been ordered to promote LGBT themes to children as you...  Children are exposed to transgender models at library "story hours."
Gay Pride apparently is OK but heterosexual pride is "hate,"  I'm here to tell you, "Bend over no more."
The real "bullying" is coming from the elite, and heterosexuals are the real victims.
"We must now face the harsh truth that the objectives of communism [Satanism] are being steadily advanced because many of us do not recognize the means used to advance them. ... The individual is handicapped by coming face to face with a Conspiracy so monstrous he cannot believe it exists. The American mind simply has not come to a realization of the evil which has been introduced into our midst." J. Edgar Hoover (Elks Magazine, August 1956.)

from Sept 11, 2009
By Henry Makow Ph.D.
Millions of young people say, "That's so gay" to denote alien, different or unhealthy.

To me, this is a hopeful sign that civilization may yet survive.

For Rockefeller-Rothschild social engineers, however, it's a nightmare.

These youths did not imbibe the propaganda that gay and straight are the same, i.e. "lifestyle preferences" like cable or dish.

So these Cabalist bankers have launched an expensive "public service" TV  campaign to teach kids that obeying their healthy instincts is "homophobic." 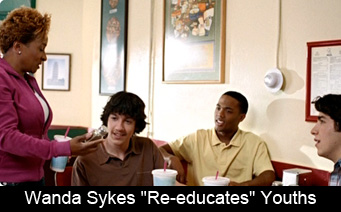 They've got celebrities like lesbian comedian Wanda Sykes overhearing teenagers, interrupting and chewing them out. "How would you like it if your identity was used to mean dumb or stupid?"

Every first-year anthropology student learns that group cohesion is maintained by defining in-group and out-group behavior. If a group cannot define itself in these terms, it disappears.  (For example, homosexuals use the derogatory term "breeders" to refer to heterosexuals.)

You're not homophobic. This campaign is a rearguard action in a war on your sexual identity. Gay Pride apparently is OK but heterosexuals cannot uphold their identity. I'm here to tell you, "Don't bend over."

Until 1973, homosexuality was considered a developmental disorder. Therapists thought it a major neurosis, a sexual perversion and even a physical illness. Then the Rockefellers yanked the chain of the American Psychological Association's and magically, overnight, what for centuries had been abnormal, suddenly was normal.

This is part of a larger attack on gender and marriage designed to decrease the population and undermine the family. In the bankers' New World Order, children are born to single mothers or in laboratories and raised by the state to serve the bankers.

Do you really think the Rockefellers, who financed eugenics for a century, including Mengele's heinous experiments in Auschwitz, care about homosexuals?   No, they are trying to turn you into homosexuals. They want you to suffer from this disorder. That's why children learn in school that homosexuality is normal .  They are taught to question their gender. When did God-given biological traits become a burden? When society was subverted by an insidious occult secret society, the Illuminati.
This isn't about equality and human rights. It's about social engineering and mind control. It's about depopulation and dictatorship.

Those three words landed her in big trouble. So how selective is this? A Christian's feelings can be hurt, but not a gay person's? Why is that?

They are not promoting tolerance. They are promoting homosexuality.

The organization behind the pro-gay ads, GLSEN, the Gay, Lesbian and Straight Education Network, has 40 full-time employees! They sponsor propaganda in thousands of schools under the pretense that gay youths are being persecuted.  They organize Communist-style propaganda events like the annual "Day of Silence" when their supporters protest the fact they are being silenced!!

Wake up heterosexuals! Wars of aggression always use a phoney pretext of defending from attack.

In reality, heterosexuality is under attack. You are being persecuted. You are coerced to adopt unhealthy unnatural behavior which will prevent you from marrying and procreating. Satanism makes unnatural natural, sick become healthy.

Of course, gay youths should be treated with kindness and consideration. It's not their fault they are gay. They're not aware of how homosexuality is being used. But let's draw a line. They're not the same as we are and we have a right to say so.  We mate for life, usually for the purpose of procreation.

Our society has been subverted by Cabalist bankers, including many homosexuals, who have stolen the government's credit card. Now they have to create a dictatorship to protect their prize. They are behind all wars, depression, 9-11 and terrorism. These are ways to degrade and demoralize humanity so we will accept tyranny.

Instead of thinking of homosexuality as same-sex attraction, think of it as gender role confusion resulting in "failure to permanently bond with (i.e. marry) a member of the opposite sex." This failure results in arrested development. Homosexuals generally compensate by having promiscuous sex.

Can you see how, in these terms, heterosexuals have become like homosexuals? Courtship is almost dead.  Anonymous sex ("hooking up" is like "cruising") is in. The marriage and birth rates are down 33% to 50% from 50 years ago. Forty percent of children are born out of wedlock.

Heterosexuality is not a "lifestyle preference." Heterosexuality is being part of the natural life cycle essential to personal development, happiness and the survival of the species. A country that cared about its survival would foster courtship, marriage, and family. Children need the security, love, and example of heterosexual parents in a strong marriage.

A country that has been subverted by an alien occult financial power perverts its young men and women. Our politicians, media and educators serve this alien financial power.

Here is a description of the social, personal and health hazards associated w...
The bankers foster the illusion that gays are just like us, interested in marriage. They aren't.  In Holland and Sweden, where gays are allowed to have civil unions, less than 3% do. The same is true of Canada. The bankers want you to behave like most gays. They want you to have sex but not marriage and family. They own the world and see you as cattle or "useless eaters."

Let's celebrate men who support and lead their families, and women who sacrifice for husband and children.

As for the Rockefellers' commercials, let's say,  "That's so gay!"

---
If you agree, forward this to a teenager.

Another commercial against saying it.
Related--  Prince William on cover of gay magazine to combat bullying
Judith Reisman, 'GLSEN and Hitler Youth'
------------------------
First Comment from Marcos:
Kids as young as 6 or 7 call their buddies faggots, even those (almost all) who have no idea that men can have sex with another and who have never been exposed to any kind of homophobic environment.
The fact is that boys at that age are starting to mature their identity as males. They see that girls are naturally more shy and less adventurous and bold, and they want to move as far as possible from that condition. When a boy calls another one gay, he doesn't mean "you have anal sex with a man". He means, you are not courageous enough to jump in the pool or ride your bicycle on that path. "Come on, let's do it, don't be gay".
Even adult males call each other fags on occasion, without any hint of homo feelings or belief that the friend might be gay. "Hey, big fag, what have you been doing, let's have a beer?" is more natural male teasing than anything else, just like saying "you throw like a girl".
Far from being destructive as they may seem on first sight, these insults are paradoxically a kind of incentive and motivation for the young male to join the clan. That's how real men have been bred for millennia. Men who learn to overcome their fears, to take risks and eventually learn to believe in themselves. What the new world order globalists fear the most.
Think about it: gays are usually inward driven, too sensitive and spend half their time planning on how to get one more of their 1000 life partners for tonight. What kind of threat can they represent to the elite?

All is not lost. As we have so Delightfully seen in the sporting arena recently. Re. the Folau situation f*uck-up. Look at what to them, public ridicule and extreme $Cost$ - To Themselves ! This clearly shows what happens when you employ a Radical Lefty with a warped mindset.

stormtruther commented on Chris of the family Masters's blog post Man who pushed SARS dud now pushing new Chinese virus
"https://patents.justia.com/patent/10130701 jim stone was linking to this when the site got taken…"
1 hour ago

I have a friend who is a bus driver … a big, strong Irish guy. Recently he was a little firm with…See More
3 hours ago
0 Comments 0 Favorites

steve commented on steve's blog post The Dangerous Rise Of Men Who Won’t Date Woke Women
"Hey Doc, Don't forget the j-w diciary where they steal a mans children, kick him out of the…"
7 hours ago

Doc Vega replied to Chris of the family Masters's discussion Predictive Programming --- US Civil War?
"I wonder how many people possibly realize that if our government is allowed to continue relocating…"
8 hours ago

"Mr. Sizzle why does America have any responsibility to take on any more immigrants and refugees…"
8 hours ago