The war in Ukraine can only be resolved through "diplomacy", President Volodymyr Zelensky has said.

Speaking on national TV, he suggested his country could be victorious against Russia on the battlefield.

However, he added that the war could only come to a conclusive halt "at the negotiating table".

Meanwhile, heavy fighting is taking place in and around Severodonetsk, as Russian forces step up efforts to seize the whole of the Luhansk region.

The end of fighting in the southern port city of Mariupol has freed up Russian troops for redeployment elsewhere and allowed them to intensify their onslaught in the east.

Local governor Serhiy Haidai said the Russians were "destroying" Severodonetsk as they gradually surrounded it.

Writing on the messaging app Telegram, he said Ukrainian troops had repelled 11 attacks on the frontline - with eight tanks among the Russian vehicles destroyed. There was no independent confirmation of the claims.

BBC correspondent James Waterhouse said Russia had increased its artillery and air strikes as well as missile attacks - gaining ground mile by mile in Luhansk while the Ukrainians are forced to retreat. 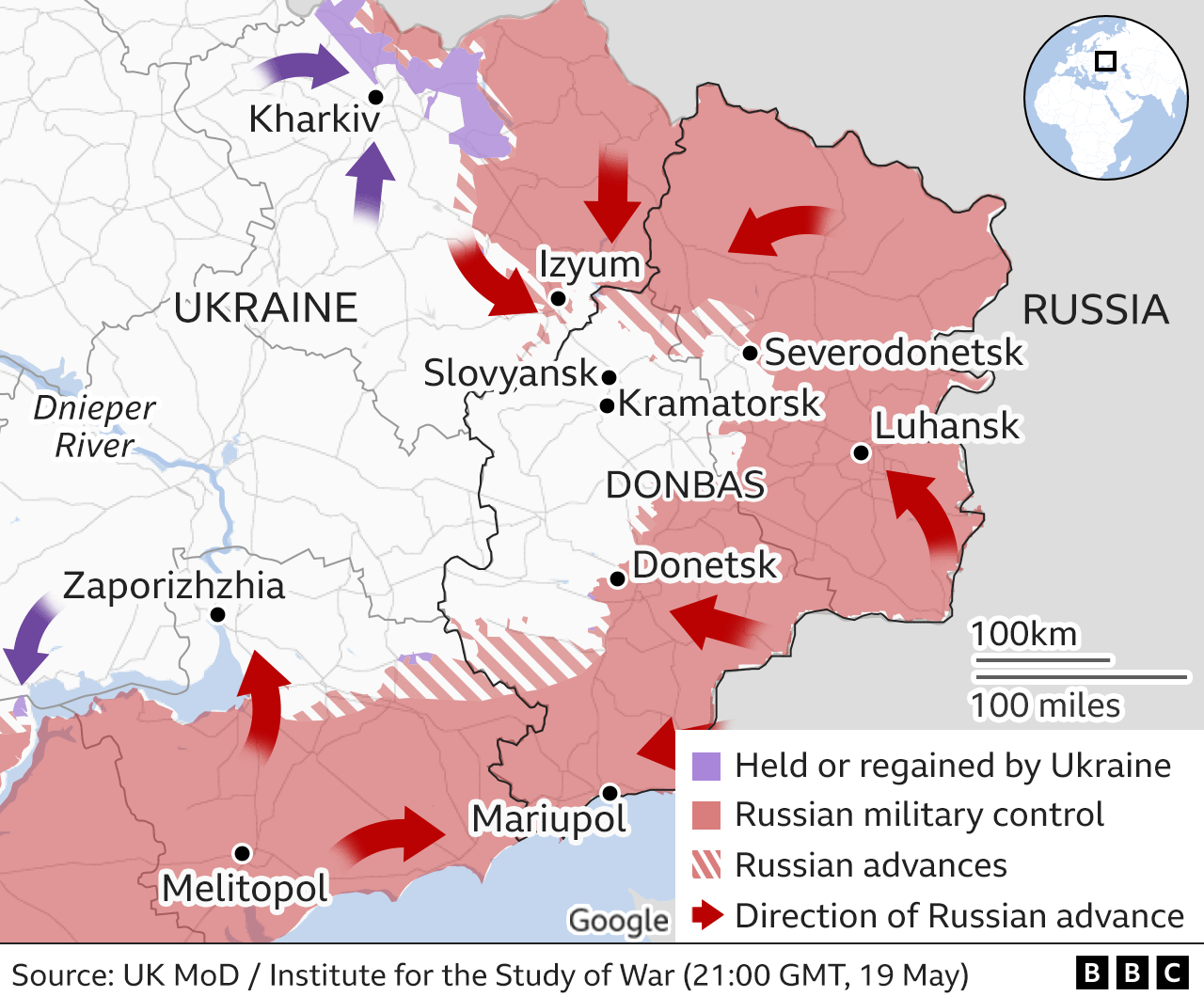 In his TV address, Mr Zelensky said the conflict "will be bloody, there will be fighting, but it will only definitively end through diplomacy".

But he indicated this would not be easy, as neither side wanted to give anything up.

With no end in sight to the fighting, the US is sending more military, economic and humanitarian aid.

On Saturday, President Joe Biden signed a bill to provide a package for Ukraine worth nearly $40bn (£32bn), the White House said.

The money represents the largest programme of American assistance since Russia launched its invasion in February.

The bill, which will funnel support to Ukraine for about the next five months, includes some $6bn budgeted for armoured vehicles and air defences.

President Zelensky tweeted his gratitude, saying military aid was "needed more than ever".

It also emerged on Saturday that President Biden is one of over 900 US citizens who have been indefinitely banned from entering Russia.

In another development, Russia has switched off its gas supply to Finland after it refused Moscow's demand to pay for fuel in Russian roubles.

In summary:  The Ukrainian government, who did not honor the Minsk Agreements for over eight years (Therefore, do not fulfill their promises) and who are getting their ass kicked, believe that Russia should negotiate while Zelensky claims Ukraine can still win if they get more money. 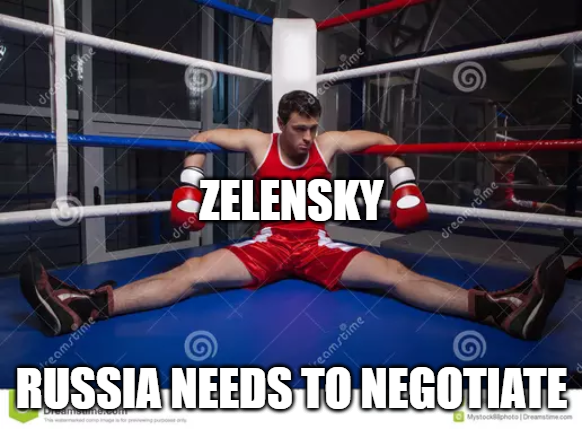 Russia has gained some strategic locations due to Ukraines aggression of stupidity and now suddenly Zelensky wants diplomacy. That seems like even more of a laugh now than it did in the first place. He may as well just put up the white fag and Surender before Russia makes them pay for their own gas in rubles like other unfriendly's. News is not fourthcoming 24/7 anymore from Ukraine as it was recently and now msm seems more focused on Finland's situation. (gearing up in preparation for the unknown complete with underground cities and plans to evacuate and relocate thousands into them if something goes wrong ) Maybe msm all know Nobody want's to stand with nazi Ukraine so they're looking for someone else more suitable perhaps. Well I would stand with Finland for sure but with Russia too. I have heard that Russia has offered to sell Kiev power from captured territory.  lol

"True so damn true."
8 minutes ago

"Now look what you've done Stuff-up fuck-up. ~May your national demise be our wondrous Rise.…"
3 hours ago

cheeki kea commented on Less Prone's blog post The Malone Institute presents: World Economic Forum Project
"Yes they are all traitors, clowns or whores but collectively they know themselves as Puppets…"
4 hours ago

MAC replied to MAC's discussion Putin's Chilling Message to the West at the 10th Moscow Conference on International Security
"Putin the right man in the right place at the right time, stomping the nwo asshat country's…"
6 hours ago

cheeki kea commented on Less Prone's blog post The provocation is getting worse: Finland and Estonia are planning to set up a missile system to block Russia's Baltic fleet
"Finland shouldn't tie bows with Sweden and others if the provocative move brings disharmony to…"
6 hours ago

"Ol trumpy bear is a damn good salesman/circus barker if nothing else. He could sell ice to eskimos…"
6 hours ago

Less Prone commented on Less Prone's blog post The Malone Institute presents: World Economic Forum Project
"Thanks for bringing this up, Steve. The world is a big circus with bought out political clowns…"
7 hours ago