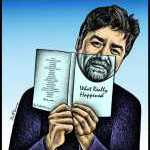 ANNOUNCING THE "SEND MICHAEL RIVERO TO NEW YORK BECAUSE IT'S HIS BIRTHDAY" FUNDRAISER!

ABCNNBBCBSFOX, The Public Message Is NOT Mixed!

You need to be a member of "What Really Happened" Radio -Web @12160 to add comments!

For 6 years Naden has been on the run eluding Police ,Television reports say
Police have been given "Shoot to Kill " orders  to capture him, They aparrently got within 20 Meters of him
but aparently lost  sight of their  alledged offender who is  now still at large.  Similar incidents
occurring in other parts of the world is reminisant of  similar incidents and subsequent Fearmongering of the popolous

NSW Police Commissioner Andrew Scipione says he's confident Naden will be found, and has
warned that police will shoot if threatened.

"Our aim is to take this man into custody and put him before the courts," Mr Scipione told
ABC Radio on Thursday.

"If, however, we get to the point where an officer has to defend himself or herself, then
we'll take whatever course is necessary to ensure that they are safe.

Michael Rivero  on the Edge Interview

THE ELEVENTH MARBLE | WHAT REALLY HAPPENED

Comment by TheLasersShadow on June 1, 2011 at 7:38pm
mikes back on right now http://www.justin.tv/michaelrivero# 7pm-9 est

This is one to keep an eye on for sure.

Comment by peter b dunn on May 25, 2011 at 1:54pm
Some of the world's foremost economists are now leading the charge for action against climate change, a senior Australian academic says.   http://finance.ninemsn.com.au/newsbusiness/aap/8253587/economists-c...

ANNOUNCEMENT! STARTING ON WEDNESDAY, JUNE 1ST (ONE WEEK FROM TODAY), THE WHAT REALLY HAPPENED RADIO SHOW WILL START BROADCASTING THROUGH THE RENSE RADIO NETWORK MONDAY THROUGH FRIDAY FROM 3PM TO 5PM PACIFIC TIME, 6PM TO 8PM EAST COAST TIME.
ANNOUNCEMENT! EFFECTIVE IMMEDIATELY, MY SHOW AT RBN HAS BEEN CANCELED. REPEAT: NO RBN RADIO SHOW TODAY!

Victoria's Director of Public Prosecutions (DPP) has resigned after a report handed to the government found he made an "error of judgment" when promoting young lawyers.

The Victorian government received the report by retired Supreme Court judge Frank Vincent QC into a bitter dispute involving Mr Rapke at the end of March.

He has denied having a sexual or inappropriate relationship with Ms Karamicov.

While the contents of the report will remain secret, Mr Clark said it found Mr Rapke's actions had created a perception of a conflict of interest.

"Mr Vincent found ... that Mr Rapke adopted a course of action that gave rise to a perception of the presence of a conflict of interest," he told News Ltd.

"He also found that Mr Rapke had engaged in no conscious wrongdoing."

In his resignation letter, published by News Ltd, Mr Rapke said he wanted to give the government "a completely free hand" to restructure the Office of Public Prosecutions.

He said the report found he had made an error of judgment in the way the appointments had been handled but that he had not engaged in any "conscious wrongdoing, illegality or impropriety".

"He (Vincent) concluded ... I had made an error of judgment in the process," Mr Rapke said in the letter.

"During the inquiry I acknowledged that misjudgment.

"Indeed, he noted that no one who had come into contact with me ... could reasonably doubt my intelligence, legal skills or commitment to the proper performance of my duties."

The Attorney-General will release a formal statement on Sunday.