San Bernardino SWAT team was training nearby and was suited, “ready to roll”

Firefighters set up triage areas in response to an active shooter incident in San Bernardino on Dec. 2, 2015. (Credit: KTLA)

The call first came in at 10:59 a.m. of multiple shots fired from the area of 1365 S. Waterman Ave., San Bernardino Police Department Lt. Richard Lawhead said. The department’s SWAT team was training nearby and was suited, “ready to roll” and responded rapidly, Lawhead said. 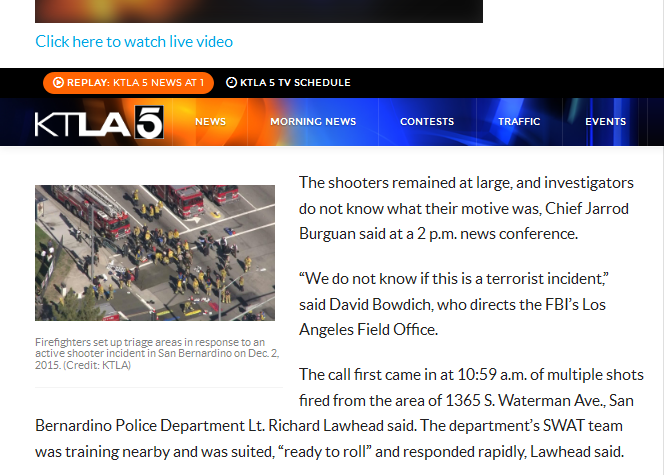 So the question is:  Is this a genuine screw-up by the Daily Mail and CBS?  Or a trap to see who sends her a text message warning her that this is a staged event / drill gone live?  In other words, is "Gina" an innocent eyewitness, or a stage actress? 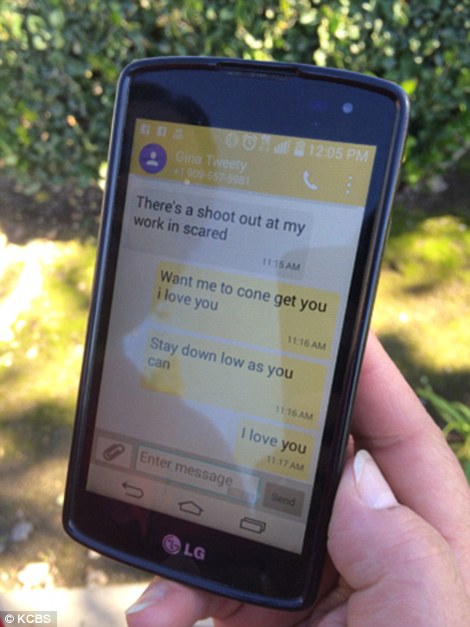 Watch how quick the mainstream media pulls THIS PHOTO.

What are the odds?

(To read about Jon’s mega-collection, The Matrix Revealed, click here.)

Note: Thanks to humansarefree.com. I found much information at the site, as well as links to relevant articles.

Whether mass shootings are approached as the mainstream reports them, or as false flags, staged scenarios, or outright hoaxes, there is a common thread which runs through some of them: official training exercises held just prior to, or at the same time as, the shootings.

I’m not trying to present an all-inclusive list here.

The November 13, 2015, Paris attacks: “Since the Charlie Hebdo attacks in January, from which 16 people died, Paris-area ambulance crews and emergency personnel have taken part in regular exercises designed to test their readiness for possible attacks. One such exercise was held on Friday morning, the day of the latest terror attacks. In a twist of fate, the simulated emergency was a mass shooting, according to Dr. Mathieu Raux, emergency room chief at the Pitié-Salpetrière hospital in Paris.” (Bloomberg, 11/17/15, “Hours Before the Terror Attacks, Paris Practiced for a Mass Shooting”)

Boston Marathon attack, April 15, 2013: In this case, the training exercise was called off, because the real thing happened before the exercise took place—“…the DHS-funded drill, known as ‘Operation Urban Shield,’ was intended to take place during the summer, according to the Boston Globe — that is until the ‘real’ event beat it to the punch. But the drill itinerary so closely resembles what actually occurred the day of the bombings that even the mainstream media source responsible for bringing it to light could not help but point out this incredible ‘coincidence,’ …The [training exercise] scenario had been carefully planned: A terrorist group prepared to hurt vast numbers of people around Boston would leave backpacks filled with explosives at Faneuil Hall, the Seaport District, and in other towns, spreading waves of panic and fear, explains the Boston Globe…” (Natural News, 6/22/13, “DHS documents prove Boston Marathon bombing was false flag ‘drill’ planned months in advance”)

Sandy Hook school shooting, December 14, 2012: “By grim coincidence, even as the terrible events were unfolding in Newtown on Friday morning, the Putnam County Emergency Response Team (‘ERT’) happened to be assembled for regular training in Carmel, and team members were at that very moment engaged in a mock scenario of an active-shooter in a school. The ERT is comprised of specially trained and heavily armed officers from the Sheriff’s Office and the Carmel and Kent Police Departments. When news broke of the Newtown shooting, the Putnam County ERT commander called Newtown Police and offered to have the ERT respond to the Sandy Hook school, but that response was not needed because Connecticut police had already secured the scene.” (Southeast-Brewster Patch newspaper, 12/18/12, “Sheriff: Putnam Officials to Talk School Safety This Afternoon”)

The July 20, 2012, Aurora, Colorado, “Batman” shooting: “The tragedy that played out in an Aurora movie theater Friday was ironically paralleled as a classroom learning experience in a medical school in Parker the same day. Rocky Vista University College of Osteopathic Medicine is in the middle of holding specialized classes in disaster life support for 150 second-year medical students. Along with response to natural disasters like hurricanes and floods and terrorist attacks, one of the scenarios being used to train the students is how to respond if a shooter fires at people in a movie theater and also uses a bomb in the attack. ‘The irony is amazing, just amazing,’ said Rocky Vista Dean Dr. Bruce Dubin.” (Denver Post, 7/21/12, “Real life shooting imitates training exercise at Parker medical school”)

The Oslo bombing/shooting attack, July 22, 2011: “Only hours before Anders Behring Breivik began shooting children on Utøya, the police emergency squad concluded an exercise where they practiced an almost identical situation. Four days in advance, and also the same Friday the attack was carried out, the police special unit trained on an ongoing terror campaign that was approximately equal to the situation that hours later, met the 22 police officers within the emergency squad on Utøya. As far as Aftenposten has been informed, the training transcended directly into what the policed then faced in the Tyrifjord that very day; a mobile terror attack, in which one or more perpetrators only goal was to shoot as many people as possible and then shoot the police when they arrived. Only 26 minutes after the emergency squad’s training had concluded, the car bomb went off in the government quarter. The Emergency Squad arrived early on the scene.” (publicintelligence.net, 8/30/11, “Norwegian Police Conducted Drill for ‘Almost Identical’ Scenario Minutes Before Utoya Massacre”)

“Peter Power, Managing Director of Visor Consultants, a private firm on contract to the London Metropolitan Police, described in a BBC interview how he had organized and conducted the anti-terror drill, on behalf of an unnamed business client.

“The fictional scenario was based on simultaneous bombs going off at exactly the same time at the underground stations where the real attacks were occurring:

POWER: At half past nine this morning we were actually running an exercise for a company of over a thousand people in London based on simultaneous bombs going off precisely at the railway stations where it happened this morning, so I still have the hairs on the back of my neck standing up right now.

POWER: Precisely, and it was about half past nine this morning, we planned this for a company and for obvious reasons I don’t want to reveal their name but they’re listening and they’ll know it. And we had a room full of crisis managers for the first time they’d met and so within five minutes we made a pretty rapid decision that this is the real one and so we went through the correct drills of activating crisis management procedures to jump from slow time to quick time thinking and so on. (BBC Radio Interview, 7 July 2005—as reported at Global Research, 8/8/15, “Ten Years Ago: The London 7/7 Mock Terror Drill: What Relationship to the Real Time Terror Attacks?”)

9/11/01 attacks on Trade Center and the Pentagon: No less than 22 drills took place on that day, among which was a National Reconnaissance Office exercise in Chantilly, Virginia, involving a simulated plane crashing into a tall building. (See Kevin Barrett’s chart of 9/11 training exercises “The 46 drills, operations, war games, and activities of 9/11”, based on Webster Tarpley’s book, 9/11 Synthetic Terror: Made in USA (5th Ed))

(To read about Jon’s mega-collection, Power Outside The Matrix, click here.)

“The call first came in at 10:59 a.m. of multiple shots fired from the area of 1365 S. Waterman Ave., San Bernardino Police Department Lt. Richard Lawhead said. The department’s SWAT team was training nearby and was suited, ‘ready to roll’ and responded rapidly, Lawhead said.”

—Yet another mass shooting where, by chance, a training exercise was going on during or prior to the event.

Here is a recent article I wrote about mass shootings paralleling training exercises:

Training exercises dovetail with mass shootings What are the odds?

Comment by truth on December 2, 2015 at 5:30pm
witnesses tell CNN they didn't realize there was a real shooting going on since they were recently having "active shooter drills".
— nycphotog (@nycphotog) December 2, 2015

The One replied to Parrhesia's discussion Highland Park Illinois Parade Shooter
"When you are Right, are Right…"
2 hours ago

"It is funny seeing them accuse each other of the typical "go to" liberal insults. …"
5 hours ago

"Garbage being garbage, hopefully the great starvation will get rid of most of them "
5 hours ago