Just like in other typical rigged elections the leftists won by a slim margin of one percent. Bolsonaro had enormous support of the people but as in 2020 it did not bring a victory to Trump, but a defeat. Brazil has an electronic voting system and who controls it can decide who wins the election.

What is really needed now is a military take over and imprisonment of the thief and fraudmaster Lula who has still to complete his prison term from embezzlement of public funds during his previous presidency. Lula is a con man and a thief, but loved by yhe globalist elite scum. Lula's presidency will only bring Brazil down after a brief recovery during Bolsonaro's presidency.

Lula is a member of the "Worker's Party" that in effect is an executive arm of the Brazilian Communist Party. They cannot openly declare Marxist ideals as it is out of the fashion these days. People too often swallow the lies but now it's over for communism and new deception has to be deviced.

Brazil: Lula's arrest - statement of the Marxist Left in support of...

"The Marxist Left condemns the bench warrant for questioning against Lula, which took place on Friday (4 March) morning, organised by the Federal Police, together with the bourgeois media, and considers this to be an attack on democratic rights."

Just like Donald Trump his assured presidency was stolen from him! 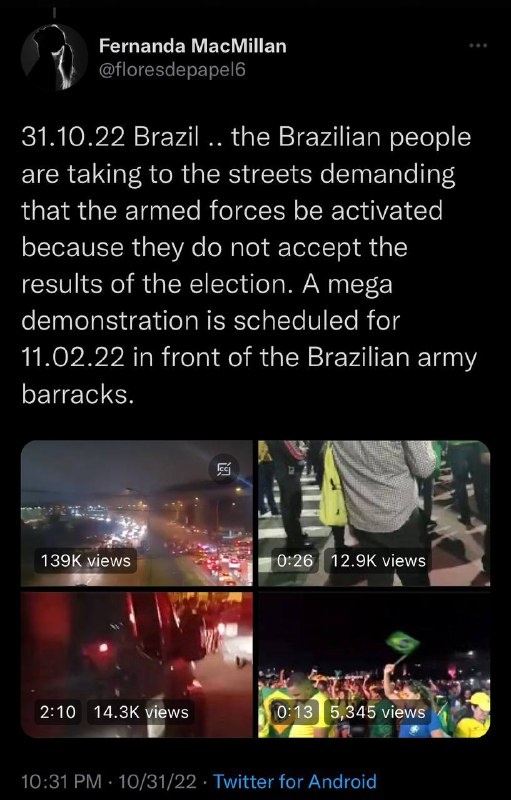 Just one more regime change thanks to US/NATO backed "intervention" (More like mafia strong-arm tactics.)  They did it in Libya, Ukraine, Haiti, Iran, Guatemala...the list goes on and on.  According to one study, the U.S. performed at least 81 overt and covert known interventions in foreign elections during the period 1946–2000.

Doc Vega commented on Doc Vega's blog post For Those Who Fight Evil
"Ha ha Good One cheeki! "
11 hours ago

Less Prone commented on cheeki kea's blog post "I Am Taking This Very Seriously": BlackRock's Larry Fink Struggles With Demonized ESG narrative.
"Where did they get the name Blackrock for this company and how does it relate to their values? The…"
13 hours ago

Gail Jones is now a member of 12160 Social Network
15 hours ago
Welcome Them!

cheeki kea commented on Doc Vega's blog post For Those Who Fight Evil
"Brains of sheep moving to slow. Lower IQ begins to show, mass immigration diluting the nation, of…"
17 hours ago

"First you see the Nordic ladies in their beautiful costumes and then you see IT. Looks like Finland…"
18 hours ago

cheeki kea commented on tjdavis's blog post Canadian Government Asissting Suicide
" Oh wow That was really said. " Trained to Eliminate those that are suicidal" Not a…"
20 hours ago