Far-right demonstrators in Boston appeared to be greatly outnumbered by their opponents - perhaps as much as ten to one - as the city braced for two competing rallies.

I ask everyone to be peaceful today and respect our City. Love, not hate. We stand together against intolerance.


The events were taking place a week after clashes at a white supremacist protest in Charlottesville, Virginia, that resulted in more than 20 people being injured and one young woman, Heather Heyer, being killed. A 20-year-old man has been charged with her murder.

The protests appeared to be overwhelmingly peaceful, although CNN said that police arrested eight anti-fascist protesters after briefly clashing with police. 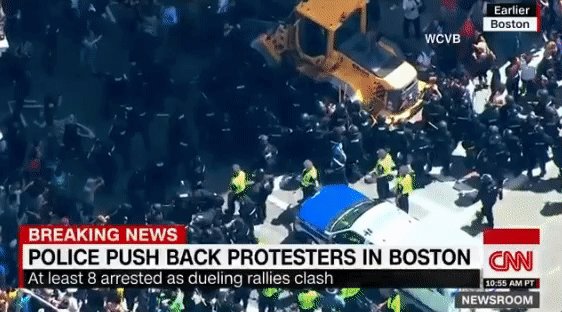 
Donald Trump has found himself under intense criticism for his slow response to the events in Virginia and his suggestion there was “blame on many sides”, rather than an unequivocal criticism of the neo-Nazis and racists who were present.

Comment by Less Prone on August 21, 2017 at 7:00am
The scales will turn when the bought Antifa protesters don't get their pay.

"Yea let us not forget the criminal enterprise known as the C I A the HEROIN king of the world,…"
50 minutes ago

"Yeah! There's a dose of reality for yuh!"
3 hours ago

"WTF is anyone with a brain thinking about American leadership at that summit?"
4 hours ago

"Damn that's funny but having this ass clown in office isn't!"
4 hours ago

"I believe this will go down as my all-time favorite."
9 hours ago