Huh. Elks.... I never even knew they were racist. I think they're at least light brown, are they self-hating elks? Or is the fraternal organization, the Elks, a secret KKK group?? Inquiring minds want to know. Until next time, hurr de durrrr!

The Regional Arts & Culture Council says the statue is at risk of toppling. Parts of the fence that surrounded the Justice Center were removed, and used to decorate the Elk statue on SW Main Street in June. (Alex Wittwer)

The Portland Police Bureau announced on Thursday that the city will take down the 120-year-old Thompson Elk statue situated in between Lownsdale and Chapman Squares, across the street from the Multnomah County Justice Center, because protesters damaged its structure while setting it on fire.

On July 1, some protesters lit fires at the base of the statue, police say. The Regional Arts & Culture Council determined the damage to the base is so severe that it is possible for the statue to topple over and injure someone.

"Engaging in criminal activity including vandalism and property damage is not peaceful demonstration," Portland Police Chief Chuck Lovell said in a statement. "We ask for the public's help in identifying and sharing information about those responsible so they can be held accountable." (more at link)

The Elk's club here are all black......go figure

Bolshevik revolution, take two. The same forces that destroyed imperial Russia and killed the Tsar and his family are at it again, now in the US.

You know what GoS, and JR, It's not going to stop. The controllers have let the antagonisers lose the plot and all statues are fair game to their insanity. There is no respect for Anything, as Everything is Equal to Nothing. Here we have seen them even deface the statue of a cute dog and turn Sir grey Red, they hate captain Cook and Queen Victoria, but even worse they want to take out Robert Burns him self ! They are a disgrace, (that's when the swords might come out) 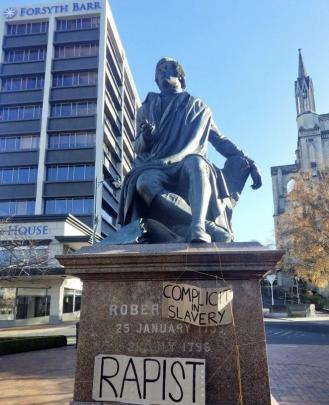 When is this shit going to be stopped?  Why were they not stopped as soon as they lit the fire?

Someone needs to go there and start kicking ass.

Doc Vega commented on Doc Vega's blog post They Are Coming After You and I
"Chris of the Family Masters Thanks Buddy."
5 hours ago

Less Prone favorited Twilight Zone's discussion Self-harm claims rise by 333% and overdoses are up 120% among 13 to 18-year-olds: The shocking toll of the pandemic on teenagers' mental health is revealed
5 hours ago

Exactly how I’m feeling this morning

"You know what Bob I think normal everyday language will do the the trick in a cancel culture world.…"
7 hours ago

"I have decided to tell every one willing to get jabbed,  It was nice to know you...."
8 hours ago

Chris of the family Masters commented on Phyllis Maka's blog post PEOPLE POSTING CORONA VAX HOAXES
"It's not a vaccine. It's "Operating System" according to Moderna website."
9 hours ago