Hillary Clinton's emails prove that the U.S. and the West are willing to kill to stop the rise of a gold backed currency

Hillary Clinton's emails prove that the U.S. and the West are willi...

One of the biggest reasons that the U.S. is so hell bent on framing Russia as a criminal on the world stage is not necessarily because of their intervening in Washington's agenda of bring about chaos to the Middle East, but instead because of its potential of destroying America's hold on the world's singular reserve currency.

And there are two ways in which they can achieve this.  First it is by overtaking OPEC and putting an end to the long-standing Petrodollar system.  And second would be through the creation of a gold backed Ruble, which would instantly turn the Russian currency into the most secure form of money on the planet.

Now many Western analysts have been pushing the narrative that a return to a gold backed monetary system would be impossible to achieve, since their faulty premise is based on the total amount of physical gold available to backstop the total amount of worldwide currency.  Of course the real reasons they use this propaganda is because a gold backed monetary system would be a hindrance to a government and central bank's ability to borrow capriciously and without through of any financial consequence.

But the reality is that a gold backed monetary system works just fine if you allow the price of gold to float and not be fixed, and if done on a worldwide scale it would segregate out the nations who destroy their currencies through vast money printing and those who act in a responsible manner, using their money supplies as was intended to control and regulate costs.

With this in mind, and with the advent of Wikileaks disseminating thousands of emails found on former Secretary of State Hillary Clinton's servers, we discover that the unlawful attack on the nation of Libya a few years back, and the subsequent murder of Libyan leader Muammar Gadafi, was enacted entirely because he was in the process of creating an gold backed currency that would not only help grow African nations economically, but also help them to get out from under Western colonialism and the long-standing dominion the U.S. and Europe had over the Dark Continent. 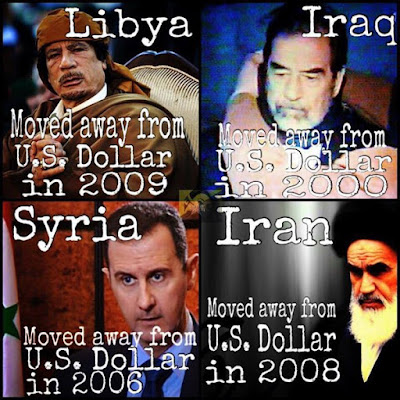 One of the 3,000 Hillary Clinton emails released by the State Department on New Year’s Eve (where real news is sent to die quietly) has revealed evidence that NATO’s plot to overthrow Gaddafi was fueled by first their desire to quash the gold-backed African currency, and second the Libyan oil reserves.

The email in question was sent to Secretary of State Hillary Clinton by her unofficial adviser Sydney Blumenthal titled “France’s client and Qaddafi’s gold”.
From Foreign Policy Journal:

The corrupt politicians work for the usury cabal.

"First you see the Nordic ladies in their beautiful costumes and then you see IT. Looks like Finland…"
11 minutes ago

cheeki kea commented on tjdavis's blog post Canadian Government Asissting Suicide
" Oh wow That was really said. " Trained to Eliminate those that are suicidal" Not a…"
2 hours ago