Organized Resistance To The American Election Process By the Left 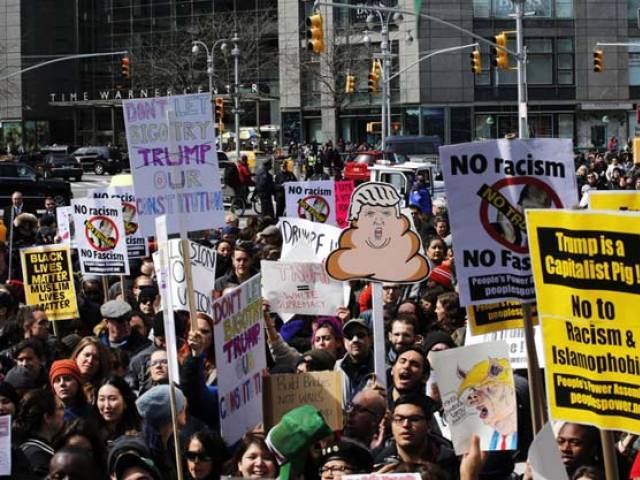 The Deplorable Intolerance of Democrats

In the wake of the Trump victory in his bid for the presidency the White House and Hillary Clinton should have wished him well and gotten on with the business of healing the nation, right? Wrong. With a series of nightly protests that have turned violent in many major US cities and the media brandishing a lie that Clinton won the popular vote when The Donald has 318 electoral votes, it appears the left will not let sleeping dogs lie.

The US media has portrayed the demonstrations being pursued in our cities as some kind of random volunteered effort but once again the ghosts of Ferguson and Baltimore emerge. Paid protesters hiding behind face wraps and rags have once again been committing acts of violence and damage to public property. Police have been injured, forced to disperse the troublemakers and jail them, while disaffected Millennials look on. There has been a concerted effort by college professors encouraging their students to protest and skip classes. Social media has been slandering not only Donald Trump but even Melania, his wife.

Unseen but still there

If one thinks that George Soros, the leftist promoting billionaire has not been behind a lot of this organized and well funded rioting-think again! The insurrection has a purpose, a motive to attempt to destabilize our society to avenge an election outcome that was fairly decided by a voting majority despite desperate attempts by the US media to get Hillary into the oval office. A revolution occurred in America-an overthrow of the DC establishment and its unholy alliance with the press corps and business community that profited from big government.

They will not go down quietly into the night, but they will not go down honorably kicking and screaming either! They will be trying to obstruct, destroy, and subvert all efforts at a recovery of this nation in order to preserve the corruption that has put America into a death spiral for the last 8 years. The US mainstream media will continue to cover the violence as simply a bunch of disaffected students who cannot accept an election where the candidate with more popular votes lost. In truth, the brainwashing that has led them astray with socialist indoctrination, a well organized anti-American movement led funded by George Soros, and a Democratic Party angry at being denied rule over our nation is brewing.

Loyal to no one

One thing you can be sure of when considering the irrational vengeance of the left is that they are not out to be benevolent to anyone not even the victims they have created, but the might of the useful idiots outweighs the logic over their masses, What’s best for America economically, socially, spiritually, and harmoniously does not exist on their radar. Those poor minorities so downtrodden by the white imperialistic brutes of the white American middle class fabricated by liberal strategists are not the only enemy as the Democrats can be relied upon to throw all of their invented victims under the bus when it comes to remaining in power. Goodwill to their constituents be damned.

A corrupt means to an end

The 2016 Presidential election was a study in conflicting ideologies that divided a great nation due to the propaganda of the left taking precedence over the truth and the lust for power taking priority over the good of the people. Efforts to bring about a recovery by GOP conservatives were thwarted not only by Democrats intent upon winning at all costs with a corrupt candidate (Hillary) but willing to destroy any and everything if the distant possibility of defeat presented itself, and it did. They will not give Donald Trump and his administration time to form a winning strategy that will resurrect the nation, but they would rather blow everything up every bit as idiotically as cutting their own throats. However, it will be apparent as the new White House begins to implement policy and the positive changes come about that there will be a price to pay among those who broke the law for the sake of their warped cause under the twisted agenda of the left!

It is clear from the nonmanipulated polls that Trump has the support of the huge majority. Hillary almost managed to steel the election due to vote rigging, but failed because of huge support for Trump.

King Of Cups commented on King Of Cups's blog post Coronavirus and the relationship between 60GHZ 5G Wireless Networks implemented in Wuhan, China
"This could explain the concentration of so called cases of COVID 19 in Wuhan,…"
5 minutes ago

Doc Vega commented on Doc Vega's blog post What Happens to the Single Man Once Society Has Stripped him of his Worth?
"James, I agree but you get to the point of exhaustion sometimes when you cant even trust a wife…"
1 hour ago

A British Islamist known as "Abu Haleema" said in a video that was uploaded to the Internet on December 10, 2019 that the Prophet Muhammad had praised one of...
1 hour ago
0 Comments 0 Favorites

James Roberts commented on cheeki kea's status
"I recall watching that video. The idea that an AR-15 is fired inside a building, especially in that…"
3 hours ago

"Oh yeah, I would love to go through those file cabinets. Alex Jones said his dad told him that the…"
3 hours ago

Central Scrutinizer commented on steve's blog post WARNING WARNING WARNING Making a transwahhhhhman
"was that the same FoD tape w/ with the asian restaurant that has on it's tables, 4 wooden…"
7 hours ago

Charles Cox favorited Phyllis Maka's blog post No matter how Coronavirus plays out, this is the most relevant statement ever issued and...... Jim Stone
7 hours ago

James Roberts commented on Central Scrutinizer's blog post IN 2020, MORE PEOPLE ARE ENSLAVED ON EARTH THAN EVER BEFORE IN HUMAN HISTORY
"I remember in the summer of 1987, visiting the home of Ron Huff in a Cincinnati suburb. He was…"
8 hours ago