Talmud - Dictionary of the Great Deception

Talmud? Some moldy books? Who cares? Something completely irrelevant, outdated, religious babble!??
First of all it is more law  than religion, and secondly it is being enforced on you right now! It is not the idea to say here that the Talmud is this or that, for it is a controversial issue that people should study and form their own opinion.

What Is the Talmud?
From my Jewish learning web site. "Although Talmud is largely about law, it should not be confused with either codes of law or with a commentary on the legal sections of the . Due to its spare and laconic style, the Talmud is studied, not read. The difficulty of the intergenerational text has necessitated and fostered the development of an institutional and communal structure that supported the learning of Talmud and the establishment of special schools where each generation is apprenticed into its study by the previous generation." You certainly should study the Talmud in order to understand the philosophy behind the attitudes against the people they call the Goyim

The Babylonian Talmud, Translated by Michael L. Rodkinson
"Rodkinsons' ten-book edition, the only extensive one currently in the public domain, contains complete translations of the 'Festivals' and 'Jurisprudence' sections of the Talmud. Rodkinson only finished about a third of the Talmud. All ten volumes were prepared at Sacred-texts and are available here in their entirety."

Four Avenues of Research into the Babylonian Talmud:
"Carol A. Valentine look-alike welcomes you to Come and Hear. We are proud to bring you four avenues of research into the Babylonian Talmud — the Jewish Book of Oral Law.
...
The Oral Law can now be found in the Talmud, which contemporary rabbis tell us is the primary book of law for Jews. Contemporary rabbis are directly attuned with the Pharisees of Jesus' time through long and intensive study of the Pharisaic teachings in the Talmud. "

The Coudenhove-Kalergi plan
"The genocide of the Peoples of Europe. This is more on execution than on the original philosophy. This is today's reality. The Illuminati Jewish Plan for European Genocide.   Never have a people embraced their political and cultural demise with such complacency as the dimwitted denizens of Europe, North America and Australia. Do not direct your resentment at immigrants who are just trying to better themselves, as our own ancestors did. Direct your anger at our political and cultural leaders who, as agents of the central bankers, are colonizers and traitors." 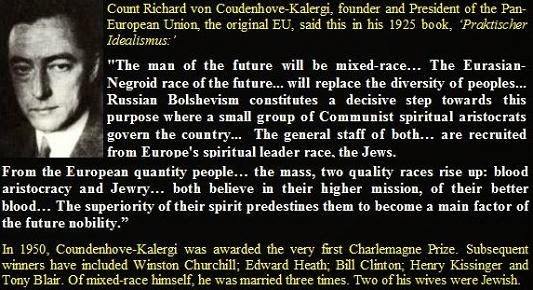 This is the Talmud.

Eisenmenger, Johann Andreas, 1654-1704 dedicated nineteen years of his life to understand and finally expose the traditions and mentality of the Jews. He converted from Christianity to Judaism in order to get the inside information, wrote it down and his work was first published, then suppressed and republished after his death.

"The first edition of the German original was issued Frankfurt, 1700, under the title "Entdecktes judenthum", but was suppressed until after a second edition appeared at Königsberg, 1711. Editions of the translation, with preface by J. P. Stehelin, were issued 1732-34 and 1742 under title: The traditions of the Jews."

"Rabinical literature: or, The traditions of the Jews, contained in their Talmud and other mystical writings. Likewise the opinions of that people concerning Messiah, and the time and manner of his appearing; with an appendix comprizing Buxtorf's account of the religious customs and ceremonies of that nation; also, A preliminary enquiry into the origin, progress, authority, and usefulness of these traditions; wherein the sense of the strange allegories in the Talmud and Jewish authors is explained"

LINK TO THE BOOK

"LOL I go bananas"
3 hours ago

Guardian of Scotland replied to MAC's discussion Military Control, 11.3 Verifies As 1st Marker, The End Won’t Be For Everyone
"Why should we trust anything that these men have to say?"
3 hours ago