Make no mistake: this is the single most consequential geopolitical decision taken in the last three decades. It's also the greatest threat to globalization."

China has been under the globalist gang's rule since the opium wars. The East India Trading Company's owners didn't make their fortunes by trading tea and spices. The same gang  is behind the decadence of humanity today with their opium money.

Bremmer is a total globalist POS.  The Eurasia Group is linked with Soros through Lord Malloch-Brown, the controversial chairman behind the election technology Smartmatic—which has caused political debacles around the world—who has served as vice-chairman of Soros Fund Management and the Open Society Institute. Since 2016, Lord Malloch-Brown—who has been a longstanding advisor of the Aquinos and the Liberal Party—also became Senior Advisor of the Eurasia Group.

Bremmer, the founder and president of Eurasia Group who is also a columnist and editor-at-large for Time, published a tweet in May 2019 that contained a false quote from Trump about North Korea. In the since-deleted post, Bremmer quoted Trump as saying “Kim Jong Un is smarter and would make a better President than Sleepy Joe Biden.” The quote was shared by Rep. Ted Lieu of California and several popular pundits, including Ana Navarro-Cardenas.
When Bremmer was confronted on the fake quote, he defended it by saying it was “plausible” and somehow made a point about the larger state of news media. “This is objectively a completely ludicrous quote. And yet kinda plausible. Especially on twitter, where people automatically support whatever political position they have. That’s the point.” Bremmer wrote in a tweet that he has also since deleted. 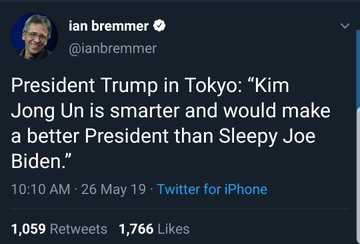 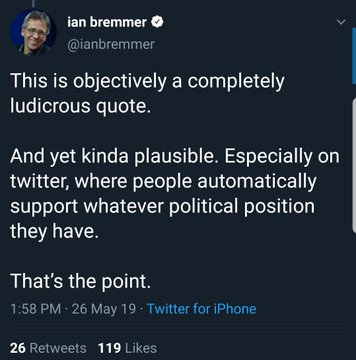 Witnesses Say He Is Asian

Western Weapons in Ukraine Being Sold On via Encrypted Messaging App: Report

So, this is where the weapons sent to Ukraine end up, I mean those that work and have some value.…See More
2 hours ago
0 Comments 0 Favorites

Parrhesia favorited Chris of the family Masters's blog post “Up yours.” - The Jesse Kelly Show
3 hours ago

Parrhesia commented on Chris of the family Masters's blog post Seriously Brainwashed Woman
"It would be easier if she just wrapped herself in the plastic."
3 hours ago

Less Prone replied to Parrhesia's discussion Send Money Now
"Zelenskyy has already helped himself to over a billion dollars abroad, money from a country deeply…"
7 hours ago

"I wonder just how crazy this world is going to be before it all falls apart."
7 hours ago

"How many times has the future of free America been killed, JFK, Larry McDonald, Frank Zappa?"
7 hours ago

Less Prone replied to Parrhesia's discussion UKRAINE “AZOV BRIGADE” (NAZIS) AGREE TO SURRENDER
"These are the ones that really committed war crimes."
8 hours ago