Amid the multiple provocative statements from President Trump on Thursday, among them his expressing "doubts" that the Ukrainian airline crash over Iran was an accident, comes this likely bombastic and truly new claim.

The president claimed that slain Iranian Gen. Qassem Soleimani and his forces “were looking to blow up our embassy” in Iraq before the US military took him out in the high profile killing a week ago.

“We took him out. We did it because they were looking to blow up our embassy,” Trump told reporters at the White House. “I think it was obvious. And he had more than that particular embassy in mind.” 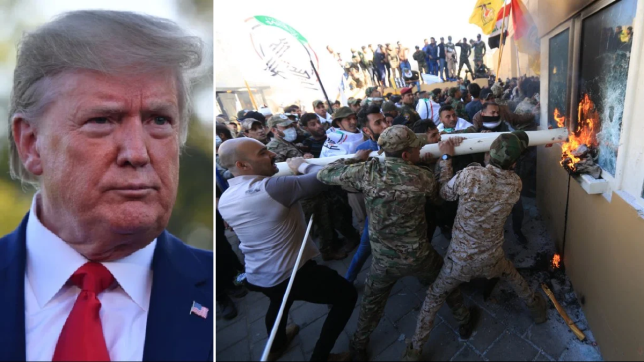 In the same statements the Commander-in-Chief further claimed he didn't need any Congressional approval to make “split-second” decisions to take action against imminent threats from America's enemies.

“I don’t have to [get authorization],” he said. “It would all depend on the circumstance. You have to make a split-second decision sometimes. We had a shot at him, and I took it, and that shot was pinpoint accuracy.”

Trump had ordered the Jan. 2 drone strike on Soleimani's convoy following the major incident at the US embassy in Baghdad's Green Zone, where pro-Iranian protesters stormed the compound walls, burning them and erecting Iraqi Shiite militia flags.

While Trump is often prone to hyperbole, especially on statements of intent and US official enemies, the charge that the Iranians were plotting to "blow up" the embassy in Baghdad is the first claim of its kind.

REPORTER: You said Iran was trying to blow up the embassy in Baghdad. Can you provide more details?

TRUMP: "No, I think it was obvious. If you look at the protests, and this was the anti-Benghazi. Benghazi was a disaster."

Just making up ****. Pretty incredible that anyone believes a word he says.

Draining the swamp by employing the same swamp creatures that have been there for decades.

Ending Obama care day one (2016) because he already has a better healthcare plan, but then again he's STILL working on it.

Getting out of the ME and not interfering in others government.

The only thing this guy has ever cared about is money.

"she was on the simpsons"
1 hour ago

"yes, I have uploded another video in a blog post with more info on this and a subtitled copy"
1 hour ago

"What is the language there, Portuguese?"
3 hours ago

"RT could have sprung for English subtitles."
3 hours ago

ITS TIME TO SAY...NO-English subtitles

The five eyes and how they spy on us

"Makes one wonder if that was really what was said, lol. Obama was smart enough not to choose…"
3 hours ago

""We all know Michelle is a tranny." - Joan Rivers (shortly before her death) "You…"
4 hours ago

ITS TIME TO SAY...NO-English subtitles

AUDIO BY Thomas Bergersen « Empire of angels » http://thomasbergersen.com/ A big thank you to all my contacts, from near and far, who took up this challenge ...
4 hours ago
1 Comment 0 Favorites

The five eyes and how they spy on us

Get vaxxed for the NWO