God Almighty, could any sane White man cook man's best friend alive? The races ARE different, in the most important ways. Watch a video of an industrial accident or a fatal traffic accident in China. Nobody rushes to help. 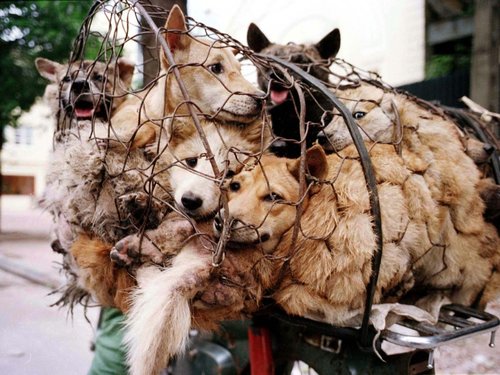 Psychopathy is a personality disorder characterized by lack of sympathy, disinhibition, domineering manipulativeness, grandiosity, lack of remorse and instrumental aggression.
Ever wondered why east asians always seem to be so cold, robotic and cruel? Thats because they have a genetic lack of sympathy and an inability to pair bond caused by the rs53576 gene. That mutation causes the oxytocin receptors to not be able to properly bind with oxytocin due to it being misshapen. East asian societies are designed to treat human beings as nothing more than disposable commodities to be used for the value of their labor. In fact students who perform poorly in school are openly encouraged to commit suicide. This is why south korea has the second highest suicide rate in the world in their fast paced economy its profits over people. They are always willing to sacrifice their own for the small hit of dopamine produced when you earn more money. Since they are incapable of feeling for others they have contempt for those who do. In japanese cultures there is a type of girl called a yandere which is japanese for lovesick. Teens going through puberty will naturally be infatuated with one another and want each others attention to occupy their time. The murderous possesive girl is an obvious exaggeration meant to shame an demonize the small minority of women who are actually capable of love. This projects onto real asian society because studies showed that 71% of them possess the gene for a lack of empathy. In order to cull this global threat genocide is necessary if we want to live in a free world.

Genocide tease sub humans....No No no Lets be more PC and call it Late Term Abortions :-)

Prime stock for the next world police.

King Of Cups left a comment for James Roberts
"Thanks for friending me James. The 7 of Cups a very powerful card, lots of opportunities and…"
1 hour ago

Doc Vega commented on stormtruther's blog post Numerous reports in the Arab press have accused the US and Israel of being behind the creation and spread of the deadly coronavirus
"If you are going to believe what the Arab press says then you might as well believe that CNN,…"
5 hours ago