When the Benevolence of a Nation Becomes its Downfall

Robert Welch Jr.founder of the John Birch Society precisely defined what the future of America would hold and he was spot on. The John Birch Society has been endlessly demonized by the left even though he accurately predicted exactly the fate of this nation. Robert Welch advocated anti-Communist sentiment, conservative values and a non-interventionism philosophy that most liberals would have been happy with, but the false narratives and slippery hypocrisy of our faux journalism and editorializing has led to trying to paint the John Birch Society into the “Hate Speech” villainy. In 1958 he made a visionary speech predicting exactly what’s happening today which will lead America down a path of destruction by the globalist enemies of sovereign republics as the United States was intended to be by our forefathers. Political factions within the US government profiting from defense contracting have endlessly pushed for foreign wars in which the US comes to the aid and liberation of our allies under fire by the Communist police actions of the so-called “Reunification” of such countries as South Korea and South Vietnam. Maintaining military bases all over the world and on an eternal arms race with the Communist super powers it seems America has fallen into an endless pitfall of deficit spending in order to maintain the role of being the “Global Policeman”. This is what Robert Welch predicted and it has transpired as Washington DC has done the work of our enemies achieving fiscal instability.

Help from our neighbors? Not so much

Our neighbors to the north and south of America are not what you’d call ideologically aligned. After the 9-11 attack Mexico claimed neutrality not allied with us. Canada under Justin Trudeau has become an undeclared Marxist Regime replete with massive mandates, confiscation of the assets of protesters, even using the police to strong arm individuals in public. Canada no longer tolerates even peaceful demonstrations much like its Communist brethren now. Yet, Mexico, Central America, and South America are now all taking part in the unconstitutional open borders crisis which is putting a drain on US resources, presenting a national security threat, and causing huge deaths due to fentanyl overdoses via the Mexican drug cartels. The cost of overseas involvement and the illegal deals being made by Democrats and some RINO’s is further contaminating foreign relations. The US even maintains air defense for Canada.

As Robert Welch predicted the Communist opposition militarily, the demands of foreign entanglements as President George Washington advised against are draining the nation to the point of currency collapse. A government for, by, and of the people intended to serve them no longer fulfills that duty anymore. The lasting propaganda assault on conservative values and constitutional government has left a successful impression in the minds of the ignorant, sleep walking, low information voter. 64 years after his spot on speech not only was Robert Welch accurate but to this day leftist, lying journalists continue to attack his influence blaming his right wing influence on the current divide in modern US society when, in fact, it has been the incessant attacks and Soviet style disinformation within our country that has not been rebuked enough by those who should have spoken out. It has rendered our mainstream media into nothing more than the equivalent of the two “Cold War” era USSR propaganda outlets, Pravda and Tass.

Ask yourself what would happen to an influx of Americans flowing over the Mexican border? They would probably be machine gunned by quasi military style border security or brutally imprisoned with little opportunity of being released much less being allowed to live, yet we have governors like Gavin Newsome of California allowing millions of unlicensed foreign drivers that the state advises on how to fake their personal ID’s. We have benevolent idiots who stand at the border handing out water, food, and even money to the illegal aliens trespassing across our borders like a silent invading army, undocumented, medically unevaluated, and allowed to bring a chain of family into the country who will inevitably receive federal, state, and county assistance for room and board, food, health, and free transportation to anywhere they choose. What country on the face of earth does this for illegally crossing foreigners while on the verge of fiscal collapse? NOBODY! This is how politically fabricated benevolence is destroying what’s left of America, all under the corrupt stewardship of the Biden Administration. 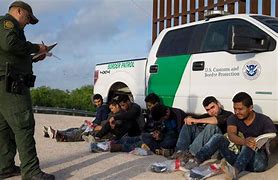 tjdavid Thanks once again for your readership!