Good find El Jefe :-) didnt know the freaks had a celebration day for their filthy mindset.

Comment by Less Prone on October 14, 2014 at 6:02am
There are even children today – often foreigners with illegal status, and therefore, who aren't especially looked out for in our country – who themselves are massacred, tortured, and murdered, to satisfy the morbid urges of those sexual deviants.
So today I want to denounce all that, because I've seen this situation with my own eyes. You know, I made revelations this year about the Dutroux affair, and on the eve, police searches that followed those revelations: yes, because when one makes revelations on the subject of pedophilia, one must expect to have a police visit, to apply pressure on you, and to attempt to make you be quiet, to reduce you to silence.
And so on the eve of that police search, documents, photos, showing children, were placed into my hands. It concerned young girls, but also babies, abused sexually, raped. Regarded as veritable… sexual accessories, sex objects. And it's nauseating, it's revolting, and when one sees that, one wants to stand up and continue the fight by saying, "No! We don't want to live in a society where pedophiles have all the rights, where pedophiles are protected."
So if, like me, you don't want to be reduced to silence anymore, if you don't want children to be in danger anymore, well, I invite you to make known this celebration of pedophiles. December 22, two days before Christmas Eve, well, pedophiles celebrate their criminality, they celebrate their behaviour, and children will suffer assaults by those sexual deviants.

Marc Dutroux
It has to be made known to the greatest number of people. Pedophiles aren't hiding anymore; they feel protected because they direct our institutions, they direct the justice system. And so, today, we can no longer accept this situation. And so all I know is that on December 22 in Paris, a demonstration has been organized to denounce pedophilia, pedocriminality. If you can't be in Paris on December 22, it doesn't matter. You can, right where you are, in your daily life, every day, tell your relations, your coworkers, your children, your parents, your friends, that pedocriminality exists, that those aren't confabulations, inventions by weird people. No! Pedocriminality exists, pedophile networks exist, and children are victims of them every day in our European countries.
And so, on December 22 and all the other days of the year, denounce this reality, denounce these behaviours, and say stop to pedophilia, say stop to the impunity of pedophiles. We can no longer accept that they direct our country; we can no longer accept that they have the nerve, the audacity, to expose themselves to the whole world and to taunt us by hurting our children, the weakest among us. We must act, we must react, we must denounce this situation, we must keep our eyes open and not accept the unacceptable, not tolerate the intolerable.
I'm counting on you to get this message across. December 22, it's absolutely necessary that everyone know that it's the celebration of the pedophiles and that children will be abused that day. We must denounce this situation so that our children are no longer in danger and so that they can live serenely. I'm counting on you; thank you very much.

It's totally obscene, it's totally scandalous that those people can also occupy such positions within our society. And so, today, pedophiles feel safe: they show off. And so, on December 22, you may perhaps see, in the windows of certain dwellings, a little blue candle. That means that the house is inhabited by a pedophile and that's he's not afraid to flaunt it.

They also recognize one another in the street, because some wear a little blue ribbon. We've been aware of the red ribbon for AIDS; well, the blue ribbon characterizes – is the mark of recognition – of pedophiles.

So today, pedophiles are allowed to do anything. They even have the right to have their celebration. There are even two celebrations of pedophilia, one on each solstice, and they live in total impunity. Very unfortunately, they're protected by the system, because pedophile networks exist. Pedocriminality is a reality.

On the other hand, what I notice is that all the people who stand up to fight pedophiles, to fight pedocriminality, well, they're given trouble. The justice system turns against them. I think of Stan Maillaud; I think of Janett Seemann, still incarcerated today; I think of Marcel Vervloesem. I think of all those people who have been called crazy because they dared to reveal the existence of pedophile networks. And yet I, you know, I observed it with my own eyes: pedophile networks exist, child abuse exists; these aren't confabulations, these are things that happen every day. Every day in our country, children are abused: children, whether newborns – unfortunately, it happens, it's obscene – or adolescents, young children. It harms boys as much as girls. It's obscene, but it happens. 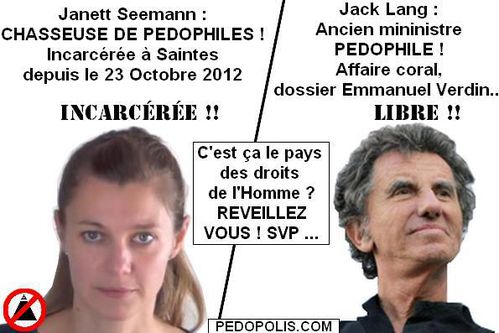 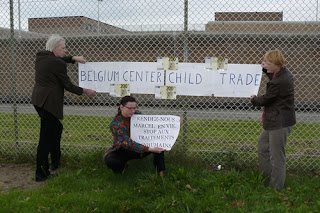 In a few days, we'll be enjoying Christmas and New Year celebrations. But on December 22, other people will be getting together to celebrate a very different event. It won't be Christmas. It won't be New Year. December 22 is the international day of pedophiles: International BoyLove Day. And you're not dreaming: such an event exists. It exists because today, pedophiles don't hide anymore. They feel safe; they're protected by the system. They're protected by the high-ups who made it so that pedophile acts aren't prosecuted.

And that's not surprising. Pedophiles occupy the most important political offices in our country. One only has to think of Belgian Prime Minister Elio Di Rupo. One can also think of the former French cabinet minister [Frédéric] Mitterrand, still a minister within the Sarkozy government. We can also think of [Daniel] Cohn-Bendit who, in a television interview, didn't hide his attraction to children between 4 and 8 years of age. Mr. Mitterrand, for his part, boasted of his voyages to Asia to satisfy his pedophile urges. 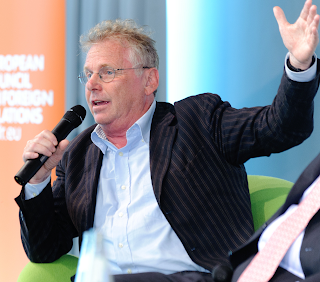 "Cheeki and Central SCrutinizer good one!"
17 hours ago