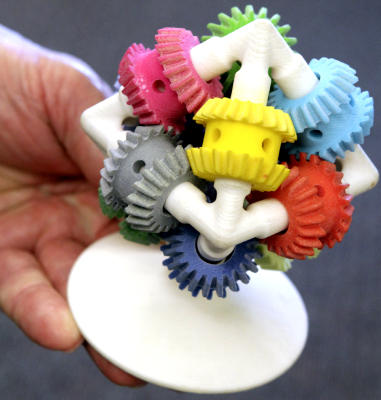 Our shop purchased the objet24 recently and we have plenty of time for your projects.

The product development landscape has evolved tremendously over the last 20 years.

Product designs have become much more complex in both their shape and functionality, while the need of reducing time-to-market has increased

The evolution of CAD Solid Modeling and computer technologies have brought forth a new way to produce prototypes know as Rapid Prototyping (RP).

Where it once took many weeks and lots of money to produce a prototype of a design, with RP it is now commonplace to produce the same prototype in a matter of hours for a fraction of the cost.

This evolution of RP has afforded companies the ability to verify and change designs more often while spending less time and money doing so. The end result is a product that:

There are a number RP technologies on the market, all work under the same fundamental principals.

Solid Modeled CAD data, in a specific file format (STL), is processed and oriented in an optimal build position.
The data is then sent to the RP machine where it is numerically sliced into thin layers.
The RP machine then fabricates each 2-dimensional cross section and bonds it to the previous layer. A complete prototype is therefore built by stacking layer upon layer until the prototype is completed.

Today, RP models can be used as:

In 3D printing area, people say "If You Can Draw It, You Can Make It". In the video below shows many items can be made with a 3D printer. However complicated objects can only be made by professional 3D printers, they are not yet affortable for common family.

What type of plastic is used ?

It really depends on what you want or need. Pricing gets crazy based on this choice too.

The company I work for has 8 of these things (for creating all of our product housings whether prototypes or production units).  Ours produce items in either standard ABS, plastic or Ultem though I know there are other plastics that can be used.

I won't describe ABS as it is so common and easy to look up.

ABS is cheaper but softer though good for a quick prototype. Ultem is usually a better solution for a production product in many cases.

Will 3D Printers Smash the Dual Menace of Big Business and Big Government?

The 3D printing revolution could be coming to your home with a new machine that costs less than an iPhone and can sit on your desktop.

MD3 is a company trying to produce an affordable 3D printing device and has set up a Kickstarter page in hopes that it can raise enough money to bring The Micro 3D printing machine to customers' homes.

The novelty machine is intended for beginners in 3D printing and can only "print" items that stand a few inches tall, but MD3 hopes that the affordable printer can bring the concept of 3D printing to the average consumer in order to get more people interested in the concept of home manufacturing.

MD3 says that their printer is plug and play and easy to use with open source software.

"At M3D we knew at some point in the future these tools would be a part of everyone’s lives, so we asked why not now?" said the company's founder Michael Armani.

"In order for [3D printers] to live up their potential, they need to be affordable and completely effortless to use," Armani said.

The Kickstarter campaign is scheduled to end on May 7 and has already raised $250,000.

WB DTOM, I can not offer any tech comment, I posted this in the hopes to save our business, which has now left me unemployed. My friends still work there so I still seek to get them some work.

Cool! I would love to have one of those printers...but they are outta sight priced though.

Store allows you to action-figure yourself

Would you pay to print an action figure/statue of yourself?

3D Printers Headed for the Home

Easter Eggs Made by 3D Printer

Ever fancy making your own action figure, not building one, but actually turning yourself into one of those one-of-a-kind comic book store collectables?  A small store in California will do just that.

Industrial scanner manufacturer Artec uses the Kinect sensor bar from Xbox to scan, and later, create a small, accurate, full-color statue of yourself.