IMF: Inflation in Venezuela to Hit 1.4 Million Percent Before End of Year 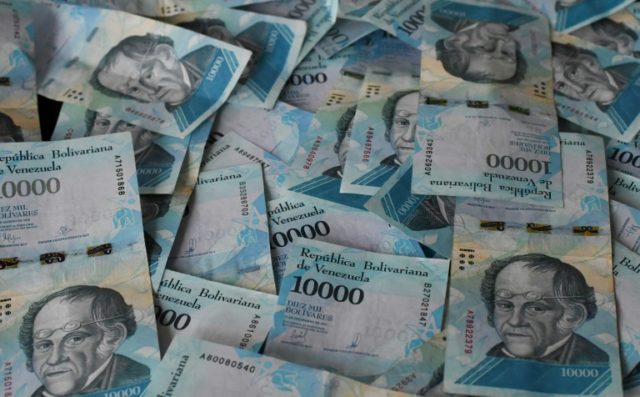 Inflation in the crisis-stricken country of Venezuela is on track to hit 1.4 million percent by the end of 2018, according to the latest report from the International Monetary Fund.
The report, entitled “Outlook on the World Economy,” predicts that inflation will reach 1.4 million by December 31, 400,000 percent higher than what they forecast in June this year and over a hundred times faster than the estimate of 13,000 percent in January.

Looking forward, the organization also believes that consumer prices will “increase by 10 million percent over the course of 2019,” explaining that “years of misguided policies coupled with a decline in production in the country’s vital oil industry to seventy-year lows have crashed the economy.”

In 2018, the Venezuelan economy shrunk by a staggering 18 percent, indicating a third consecutive year of double-digit decline that has led to the worst economic and humanitarian crisis in the entire region. The IMF is predicting a 20-percent decline in 2019, meaning the country will have lost half of GDP since 2015.

Widespread poverty and mass shortages of food, medicine, and other basic resources have caused a worsening migration crisis as Venezuelans seek refuge in neighboring countries. The mass flow of people has also begun to stoke tensions in local communities and increased the financial pressure on foreign governments.

Nicolás Maduro’s socialist dictatorship has responded to the economic catastrophe with a number of creative but ultimately ineffective solutions that has included seeking additional loans from allies such as Turkey, Russia, and China and creating its own national cryptocurrency known as the “Petro,” supposedly backed by the nation’s extensive oil and gold reserves.

Maduro’s solution to the hyperinflation crisis has involved repeatedly raising the country’s national minimum wage and taking five zeroes off of the Bolivar currency. Yet despite dozens of wage increases, many people’s monthly salary still equates to just a couple of dollars a month, as inflation continues to spiral out of control.

The worthlessness of the Bolivar and the dire state of the Venezuelan economy has raised speculation that the country will ultimately revert to the U.S. dollar in any post-Maduro regime, following the example of Ecuador who substituted their own currency back in 2000. A growing number of Venezuelan merchants are now only accepting payments in dollars to avoid constant price hikes and the inevitable devaluation of their profits.

US companies have been leaving Venezuela. Soros has US voting machines manufactured in Venezuela. The Comb Over had talks of regime change. Putin promised over 6 billion in aid for this country of 32 million people with gold and oil resources, but has delivered nuclear bombs. The elite still live in comfort as the rest of the country lives way below poverty. What else is going to happen. Are we seeing the unfinished business of the US Deep State and discontinued efforts focusing on the Comb Over?

JUST ANOTHER COMMUNIST SUCCESS STORY OF ANOTHER COUNTRY THEY DESTROYED!!!!!

Guardian of Scotland replied to Guardian of Scotland's discussion What is this all about? Why would police be firing marking rounds of paint at citizens on their own porch?
"DPS covering for the police that fired the paint markers at women on their…"
1 hour ago

"Is that pic for Oakland one of those transtesticle people???"
2 hours ago

"COVID-19, Riots all happening at the same time coincidence I think not! This is a planned tactic…"
3 hours ago

cheeki kea commented on Chris of the family Masters's blog post How Communist Jews Weaponized Blacks
"Good article and back up links. My answer to the last question would be because White people as a…"
3 hours ago

"Welcome To The New America!!!!! American's have no back bone!!!! Our Forefathers would be…"
4 hours ago

cheeki kea commented on Chris of the family Masters's blog post Mainstream Media Lying by Omission
"Oh wow, that is the big site that people go to for weather info, marine, and surf reports - and…"
4 hours ago

""If one tracks Trump’s ties to Russia, the name Mogilevich pops up more than any single…"
6 hours ago