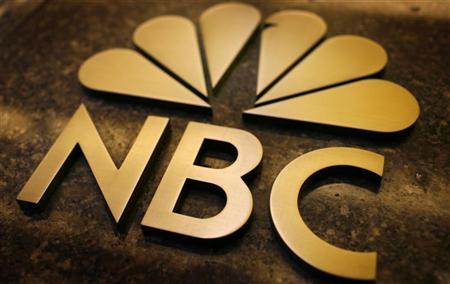 An NBC sign on the General Electric building in New York October 5, 2009.

By Liana B. Baker and Yinka Adegoke

(Reuters) - It took Jason Legate, a Walnut Creek, California-resident, all of 10 minutes to connect his computer to a London-based server and access BBC's coverage of the Olympics Saturday, thereby circumventing NBC's lock on coverage in the United States.

The 31-year-old system administrator said he has watched at least 12 hours of live BBC coverage (his favorite sport so far - judo) since he set up a virtual private network (VPN) connection to send all his Internet traffic to a server in London.

Legate is one of many viewers who, turned off by NBC's ironclad control of access to Olympics coverage in the United States and spotty online streaming, has resorted to a workaround--sometimes legal, sometimes not--to watch the Games when and how they want on feeds from countries such as the UK and Canada.

Only those customers who are first "authenticated" as paying cable or satellite subscribers have access to live streaming of every Olympic event, a move that has led to a explosion of anger at the network on Twitter under the unofficial "#NBCfail" hashtag.

Other complaints included NBC streaming that didn't work and the network bombarded viewers had too much advertising.

For its regular network coverage, NBC, which is owned by cable giant Comcast Corp, has tape-delayed some of the most popular sports for the U.S. prime-time audience, meaning they air nearly five to six hours after they have happened.

This helps NBC maximize its return-on-investment by saving the top events for the largest audience and thereby the biggest advertising pay-off. But it has also led to event spoilers and criticism that the network was putting the interests of its business over those of its viewers.

The tape delay and some glitches in the coverage fueled wider criticism of NBC. But NBC spokesman Chris McCloskey, who declined to comment on the matter, pointed to the 7 million live streams, which was a record on the first day of competition. The company is making every event available live online -- except the opening and closing ceremonies.

Enter a small but vocal group of tech savvy Olympics fans who are finding new ways to watch the world's biggest sports event away from their TV sets.

These fans use techniques that make it seem like their computers are located outside the United States, giving them access to streaming access to the Games held by companies other than NBC in countries such as Canada or the UK. Think of it as a sporting version of how Internet users inChina access banned websites by routing traffic through servers in Hong Kong in order to fool government censors.

"Because all of my Internet traffic looks like it's coming from that box in England, the BBC thinks I'm located in England," Legate said of the workaround he utilizes.

Like NBC in the United States, the BBC's Olympic rights only allow it to show the games to users in the UK. For example, when from the United States to watch a BBC or CTV stream for example they are greeted with various messages telling them that they don't have access.

Legate still pays for cable service through his local provider Astound, but said he decided to boycott NBC after he was unable to find a live broadcast of the opening ceremonies last Friday. He was also miffed by comments made by an NBC spokesman to the LA Times on Friday about the opening ceremony not translating well online because it is "complex" and requires context for a U.S. audience.

"To me, it just felt like they were insulting everyone so I basically decided to boycott NBC for the duration of the games, which meant I had to find an alternative," he said.

Legate said he has set up the same connection for a friend who wanted to watch dressage, an equestrian event that she could not find on NBC.

People who are finding ways to circumvent NBC's restrictions seem to be spreading the word to friends, like New York City journalist Kate Gardiner, who sent out a public service announcement message on Twitter last weekend to urge her followers to use a service called TunnelBear.

The 26-year-old has been using the service to keep up with live swimming broadcasts even though she does not own a television.

TunnelBear is a VPN service that sends a user's Internet connection to....REST 'O THE STORY

"ZOMG! It has come to pass! Shelter in place, everyone!"
5 minutes ago

"Banksters are going down, and it's happening everywhere. Hold on to your coupons by keeping…"
53 minutes ago

Economist John Adams and Analyst Martin North examines recent changes to the terms and conditions from our major banks. Have you read yours recently? https:/...
57 minutes ago
1 Comment 0 Favorites

Doc Vega commented on stormtruther's blog post Numerous reports in the Arab press have accused the US and Israel of being behind the creation and spread of the deadly coronavirus
"If you are going to believe what the Arab press says then you might as well believe that CNN,…"
2 hours ago

"yeah thats the truth there"
3 hours ago

James Roberts commented on King Of Cups's blog post Cultural Marxism and it's effects on America and the world as explained by former KGB Agent Yuri Bezmenov (circa 1980's)
"We should all be able to write this without Yuri's help by now."
9 hours ago