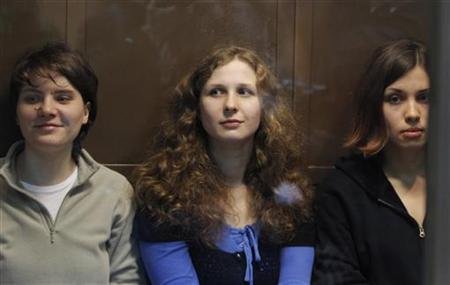 MOSCOW (Reuters) - Two female members of Russian punk group Pussy Riot convicted of protesting against President Vladimir Putin in a cathedral have been sent to prisons far from Moscow despite requesting to serve out their terms in the capital, a lawyer said on Monday.

Maria Alyokhina, 24, and Nadezhda Tolokonnikova, 22, were convicted of "hooliganism motivated by religious hatred" in August and sentenced to two years in jail, a punishment that many in the West said was too harsh.

Their stunt - bursting into Moscow's main Russian Orthodox Cathedral to urge the Virgin Mary to rid Russia of Putin - infuriated the church and many Russians. But Kremlin critics said their trial was part of a crackdown on dissent orchestrated by Putin, who began a six-year presidential term in May.

The two women lost their appeals on October 10.

The women's lawyers said they had tried to argue that they should be allowed to remain in jail in Moscow, saying it would have permitted them to be closer to their small children. They had also cited health and safety concerns at far-flung penal colonies.

"They have been sent away," one of their lawyers, Mark Feigin, told Reuters, saying he did not know where the women had been dispatched. By law, relatives must be informed once a convict arrives at a prison, but the trip can take days.

One women's prison is about 100 km (60 miles) from Moscow, but most are much further away.

A third convicted member of Pussy Riot, Yekaterina Samutsevich, was released on appeal when a court suspended her sentence after...REST OF IT

"Snopes classified this as "mostly false", as they called up the Church of Satan (probably…"
2 hours ago

James Roberts commented on Dr. Frederick Meekins's blog post Hit and Run Commentary #128
"The definition of White nationalism is that Whites should survive (I could stop there) and thrive,…"
3 hours ago

"Thank you Chris. And Hassett is a shabbez goy, to be sure."
3 hours ago

"Fortunately, they don't get everything they want. They wanted the "NAFTA…"
7 hours ago

James Roberts commented on James Roberts's blog post The Rioting is Being Staged - Even Minnesota's Governor Agrees, Says International Forces at Work
"cheeki - It is. Someone on the far right who had traveled extensively since the 60s told me (when I…"
7 hours ago