Turns out the ‘Government Sachs’ conspiracy theorists were right all along 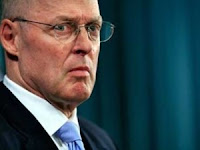 In a shocking article published in Reuters, Felix Salmon confirmed what the so-called conspiracy theorists have said all along: former Secretary of the U.S. Treasury Hank Paulson was giving insider tips to his cronies at Goldman Sachs and other Wall Street titans which directly benefited them.

The article is entitled, “Hank Paulson’s inside jobs,” emphasizing the fact that this wasn’t some one-off lapse of ethics on Paulson’s part, but instead a disturbingly regular practice.

For those who are unaware, Paulson was the CEO and chairman at Goldman Sachs from 1999-2006 and he clearly provided them with actionable information that epitomizes the plague upon our economy, and the greater global economic system, that is crony capitalism.

However, this isn’t quite a brand new revelation given the fact that in October of 2009 Andrew Ross Sorkin exposed that Paulson met with the entire Goldman Sachs board in a hotel suite in Moscow at the end of June 2008.

Salmon covered this at the time, after Sorkin’s book was released, which detailed the meeting held after the Goldman Sachs boys had dinner with Mikhail Gorbachev.
Read More

Hank Paulson is the biggest scumbag east of the Mississippi

He sure is and he belongs in prison for a long, long time.

How did they set this situation up? Surely Paulson had help. Surely this has been done before. Surely I would throw him in prison for the rest of his life, but he somehow knew he was safe. The answer lies beyond the CFRtv.

Burbia commented on Doc Vega's blog post An Incredible insight by a German Actor About Jews, their Relationship with Gentiles in Germany and How Hitler rose to power!
"This is where it led me. "
1 hour ago

"Holy moly. Been waiting to see if any influence Soph/Lt. Corbis had made to the younger generation.…"
3 hours ago

Doc Vega commented on Doc Vega's blog post Robot Companion Coming To Your Town Soon
"James, thanks man! But, I was only doing what every parent should do."
3 hours ago

Doc Vega commented on Doc Vega's blog post Robot Companion Coming To Your Town Soon
"cheeki, Thnak you Honey. I always tried to let my kids have a normal childhood where as I heard so…"
3 hours ago

PLEASE "LIKE" THIS VIDEO, it really helps me get my message along. I wrote this hoping to help people see that some stuff is getting very extreme in schools....
3 hours ago
1 Comment 0 Favorites

"I swear, if you want to find the most incisive and hilarious criticism of the Democrats, look to…"
5 hours ago

James Roberts commented on Chris of the family Masters's blog post Trump Drops Requirement for Employers to Validate Citizenship of Employees
"But of course. Meanwhile, sports stadiums full of fools will cheer their fool heads off."
5 hours ago

James Roberts commented on Chris of the family Masters's blog post Coronavirus: run, here come the experimental drugs
"Do you know how drugs are "discovered"? They always start by finding / making a novel…"
5 hours ago

cheeki kea commented on Doc Vega's blog post Robot Companion Coming To Your Town Soon
"PS.. I think any man that brings up a baby or child is amazing and deserves a medal. To bring up 4…"
7 hours ago

cheeki kea commented on Doc Vega's blog post Robot Companion Coming To Your Town Soon
"You're right Doc V. it is the brave new world and it's been coming for some time. When I…"
7 hours ago

Chris of the family Masters posted discussions
8 hours ago

"Once they return to their countries of origin Nobody will be safe. The children could slaughter…"
9 hours ago