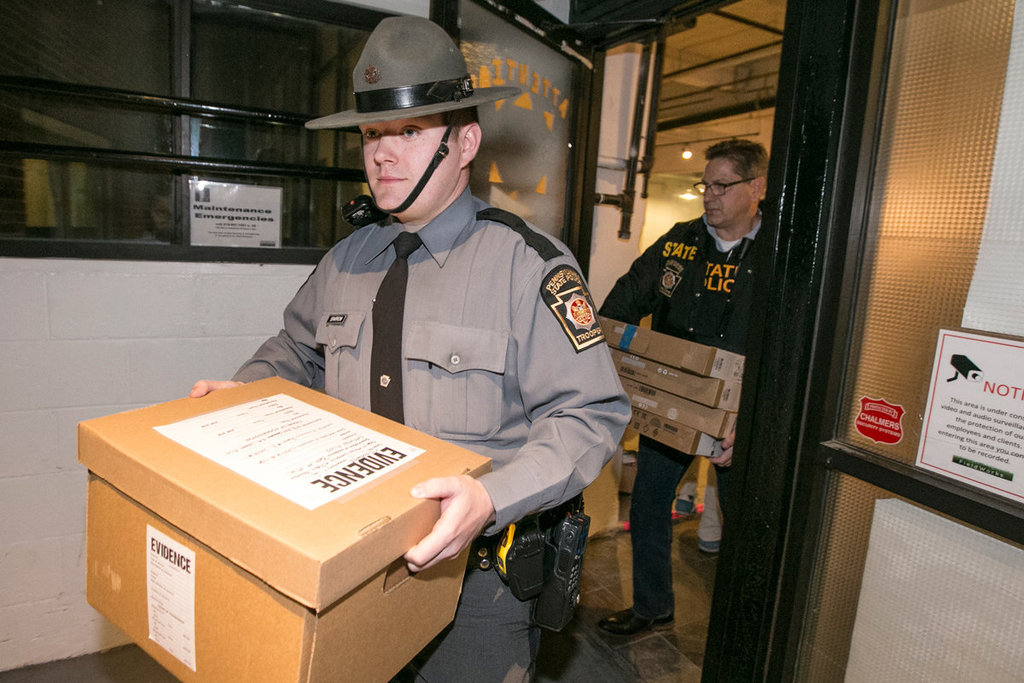 State police carry out boxes of evidence from the offices of Field Works in East Falls on Nov. 3, 2016.
by Caitlin McCabe, Craig R. McCoy, and Angela Couloumbis, STAFF WRITERS

Days after searching the Delaware County office of a Democratic grassroots organization for evidence of voter-registration fraud, state police on Thursday raided a second office - this one in Philadelphia.

As in the raid in Norwood, the latest warrant said investigators from the Pennsylvania Attorney General's Office suspected "tampering with public records or information" or violations of an act that regulates military and overseas ballots.

No charges have been filed against FieldWorks, a Washington-based organization, and it has pledged to cooperate with investigators. People familiar with the probe say there is currently no evidence pointing toward an effort to cast illegal or fraudulent ballots in next week's election.

At a meeting with the Inquirer's editorial board Thursday, Attorney General Bruce Beemer declined to discuss specifics of the FieldWorks case. But he said most voter-registration probes focus on canvassers caught "cutting corners when it comes to registering individuals or doing stuff to meet a quota."

Still, the latest raid signaled a widening probe into the organization - one that has drawn scrutiny in other states before - and came hours after Rep. Patrick Meehan, a Republican congressman and former prosecutor, accused FieldWorks or its employees of a "criminal conspiracy" in connection with disputed registration forms in Delaware County.

According to its website, FieldWorks recruits hourly workers nationwide, requiring no previous experience. Founded in 2001, it works with "progressive advocacy organizations, federal and state Democratic campaigns," and others.

Its website doesn't specifically say employees face quotas, though independent job review sites about the organization mention their existence. In both the search warrants, copies of which were filed in court, investigators said they were also seeking information including " 'quota' information" or bonuses.

At the Philadelphia office Thursday, in a converted factory along the 3500 block of Scotts Lane, plainclothes investigators and uniformed state troopers executed the warrant.

FieldWorks employees on site declined to talk. A spokesman for the company referred to a statement it released earlier this week in which the firm said it has "zero tolerance for fraud" and vowed to work with authorities "to seek the prosecution of anyone involved in wrongdoing."

Republican presidential candidate Donald Trump has ignited a conversation about voter fraud after claiming the election, specifically in Pennsylvania, will be rigged.

Officials say it would be difficult for newly registered voters who used a false name, address, or driver's license number to cast a fraudulent ballot in Pennsylvania, because such voters must provide identification that matches registration information at the polls.

In the past, executives of FieldWorks have acknowledged that its business model means some of its canvassers will likely commit fraud.

In 2012, Christopher Gallaway, one of the firm's owners, testified before the board of elections for the Cincinnati area after his group flagged hundreds of possibly fraudulent registration applications.

"As an entity that hires, you know, several thousand temporary hourly employees every year . . . we have come to realize that despite out best efforts to screen people . . . there are going to be . . . employees that we hire who unfortunately try to lie to us, steal from us by getting paid for no work and commit fraud," he said, according to a hearing transcript.

Gallaway added: "We know it's going to happen, we want to be the firm that fires them right away."

He said the firm attempts to check the background of its hires and equips them with a phone with a tracking device so the company can confirm they are working. Under the law, Gallaway testified, the firm is required to submit all forms. But, he said, the group is careful to alert officials to any troubling ones.

After a news conference Thursday in Media, Meehan, whose district includes Delaware County, said that while the alleged registration fraud by FieldWorks did not necessarily mean fraud on Nov. 8, "a clear pattern of registration fraud opens the door" to that possibility.

Alongside county Republican Party Chairman Andy Reilly, the former county prosecutor and U.S. Attorney lambasted FieldWorks, alleging that the organization operates "with a different set of rules than anyone else."

Meehan questioned 7,000 registration forms that he said FieldWorks "jammed down the throats" of county officials - possibly after the registration deadline passed Oct. 11.

According to Meehan, Delaware County - long a GOP stronghold - received on Oct. 14 and Oct. 17 the 7,000 forms from the Department of State without postmark, questioning if the state received them on time.

Of those, Meehan also cited applications from 52 voters registered at Delaware County addresses that he said do not exist, and forms from one apparent voter who appeared to be registered nine times at five different addresses.

The forms Meehan shared with reporters included some showing that FieldWorks suspected some of the forms it filed were incomplete or deserved more scrutiny. But by law, it contended, it had to submit them.

Delaware County Democratic Party Chair David Landau - who said neither he nor any county candidates have worked with FieldWorks - responded by lambasting Meehan and Reilly, claiming their actions were a "blatant attempt at voter suppression."

"When you register 7,000 people, there are going to be inadvertent mistakes," he said. ". . . But with the question of timeliness, they are trying to deprive 7,000 people" from voting.

Meehan disputed that challenging the registration forms amounted to voter suppression. Republicans said they did not know the party designations listed on the contested forms.

State elections officials maintain they would not forward registration applications to counties that had been delivered or postmarked after the state deadline. "The Department of State received voter registrations from FieldWorks by the deadline," a spokeswoman reiterated Thursday.

The issue will get new life again Friday. That's when the Delaware County Voter Registration Commission - composed of two Republicans and one Democrat - has called a meeting to discuss the 7,000 forms in question.

Less Prone left a comment for Violet Beth
"Welcome aboard. "
31 minutes ago

Less Prone left a comment for Gaspard de CASSAGNAC
"Welcome aboard. "
32 minutes ago

"cheeki - It's still relatively few involved. Those in authority, the bug chasers and pedos,…"
1 hour ago

"Sites like those in dark webs are surplus to requirement these days, when you can just hop on down…"
4 hours ago

"Yeah, that, uh, is a puzzle by any measure. Maybe he was talking to someone on the telephone about…"
4 hours ago

"Cheeki, good heavens! The images and comments here are beginning to remind me of those at a gore…"
4 hours ago

"Did the SEALS hurriedly bury his remains at sea?"
4 hours ago

"He should Not date Greta, she's too young and that's not ok."
5 hours ago

"Well he shouldn't have tried to get it on with Batman."
6 hours ago