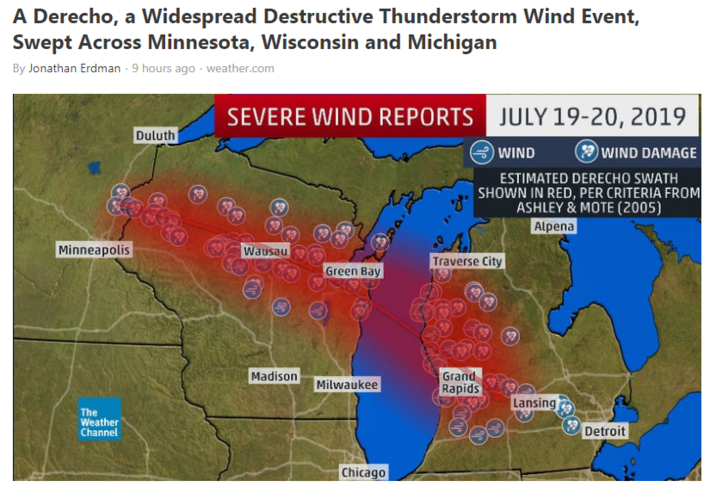 A line of severe thunderstorms known as a derecho produced damaging winds across the upper Midwest Friday and early Saturday morning, downing numerous trees, damaging some homes, and knocking out power to several hundred thousand customers. A cluster of thunderstorms in eastern Minnesota Friday afternoon organized into a squall line that raced across northern Wisconsin Friday evening into Lower Michigan after midnight, laying down a 485-mile long trail of damaging winds over a 10-hour period. This satisfied the criteria for a derecho as laid out by a 2005 study from Walker Ashley and Thomas Mote, a type of widespread convective windstorm typical in summer on the northern edge of a significant heat wave. The derecho first organized in central Minnesota between the Twin Cities and Duluth, dumping hail as large as baseballs in Pine City late Friday afternoon, smashing vehicle windshields on Interstate 35. Wind-driven hail reportedly flattened crops in the area. At least three buildings were damaged in the nearby town of West Rock, Minnesota. A trained spotter recorded a wind gust up to 84 mph and sustained winds of 73 mph for five minutes in Cushing, Wisconsin as the developing squall line crossing into northwest Wisconsin. Turtle Lake, Wisconsin, about 55 miles northeast of St. Paul, was particularly hard hit Friday evening. A roof was ripped off one business, siding partially torn off a hotel and numerous trees were downed. Power was knocked out to many customers in Polk and Burnett counties as storms tore through. Two barns, a garage and silo were reportedly downed and power poles were bent or snapped in Clark County, Wisconsin, and a well-constructed pole barn was destroyed in neighboring Marathon County. Widespread tree damage has been reported across Langlade, Shawano, Portage, Outagamie, Kewaunee and Manitowoc Counties in eastern Wisconsin. If the wind wasn't bad enough, a tornado touched down near Knowlton, Wisconsin, located roughly 50-55 miles west-northwest of Green Bay around 8:30 p.m. CDT, destroying a barn. Trees were downed in Green Bay as the line of thunderstorms arrived late Friday evening. The derecho then roared across Lake Michigan into Lower Michigan after midnight. Numerous trees were downed in Lake, Mecosta, Newaygo, Montcalm County. A wind gust of 64 mph was clocked in Muskegon, where numerous trees were downed, some on vehicles in the city just after 1 a.m. One tree was downed on a hotel in Marion, Michigan. Winds gusted to 69 mph in Grand Rapids. A roof was blown off a home in Jenison, just west of Grand Rapids and a large tree was downed on a home in Middleville, just south of Grand Rapids. The derecho finally lost its punch around 3 a.m. over southern Lower Michigan just after producing a 58 mph gust in Kalamazoo. https://weather.com/storms/severe/news/2019-07-19-severe-outbreak-upper-midwest-forecast