President Donald Trump on Thursday sent a letter telling House Speaker Nancy Pelosi that her scheduled trip to Egypt, Brussels and Afghanistan “has been postponed.”

Trump’s letter to Pelosi came just a day after the speaker urged him in a letter of her own to reschedule his upcoming State of the Union address to Congress or deliver it in writing.

“We will reschedule this seven-day excursion when the Shutdown is over,” Trump said in a letter to Pelosi, referring to the nearly four-week-long partial shutdown of the government over border security disputes between the president and Democratic lawmakers.

“Obviously, if you would like to make your journey by flying commercial, that would certainly be your prerogative,” Trump added. 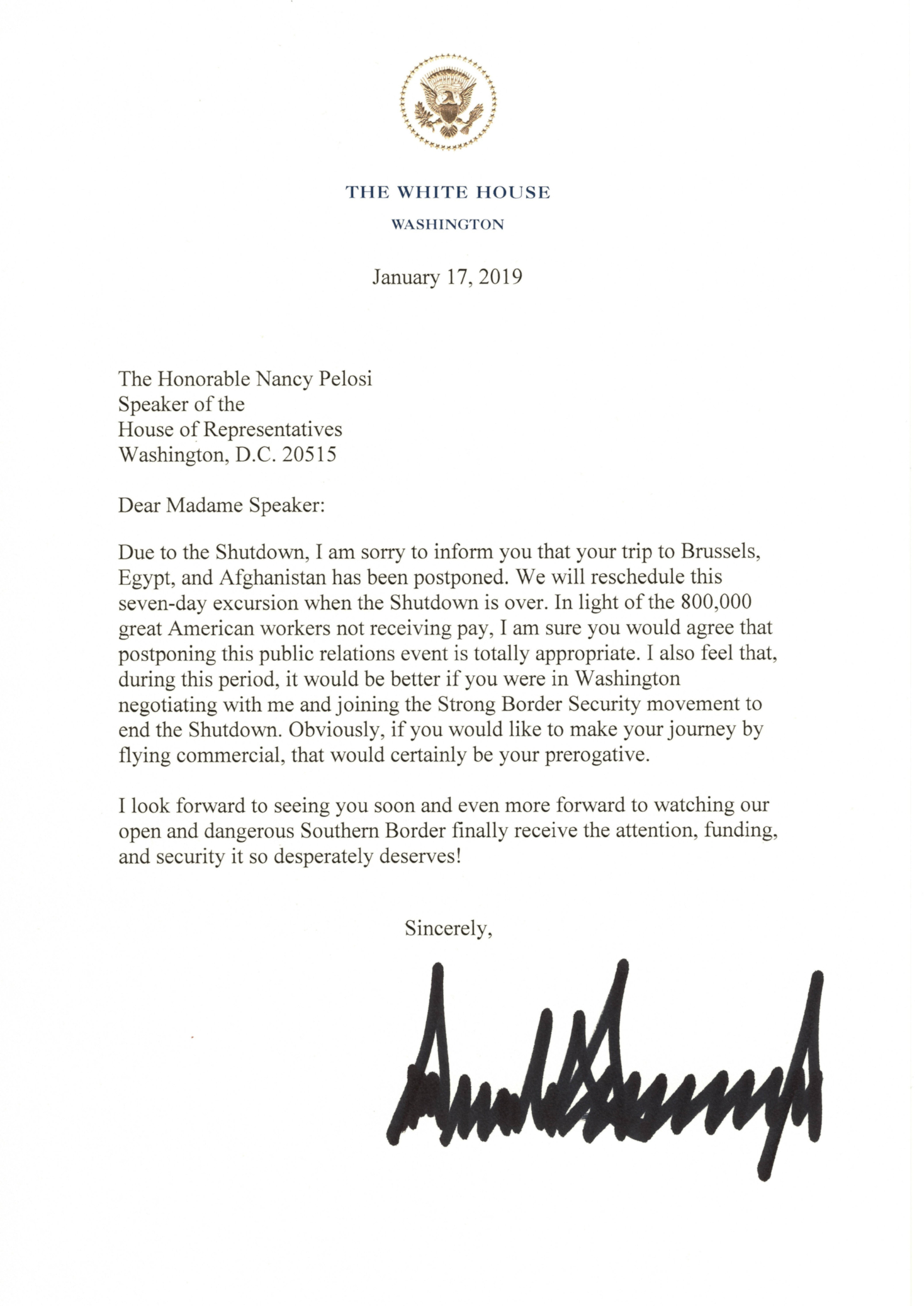 NBC News confirmed Thursday that Trump aimed to stop the trip because such official travel engagements would require the use of federally funded military aircraft.

It was not immediately clear when Pelosi’s trip was scheduled to occur. A representative for Pelosi’s office did not immediately respond to CNBC’s request for comment on Trump’s letter, which was released in a tweet by press secretary Sarah Huckabee Sanders.

WELL !!! Trump just made his biggest mistake yet. I would have let Pelosi take the plane to Europe but not let her use it for the trip home. I would hope she could not have afforded the "first class' tickets back, but I'd bet she would have made her staff pay their own way home. Still, it would have been nice to read about this happening, in the news papers. I wonder how C N N would have covered it ???

pic -- Nancy's crew stuck on a bus while her staff frantically call...

"Ok. Gotta admit Waddlesworth crushes arriving on the scene with this. Oh yeah, here's some…"
28 minutes ago

"Congratulations America, You are a force to be reckoned with ! As for You England, What are you…"
4 hours ago

Krystle Cordingley mourns her son Corbyn who died 14 hours after a flu shot. The hospital tried to cover up what happened, and doctors said his death followi...
8 hours ago
0 Comments 0 Favorites

All Government Is EvilJanuary 20, 2020By: Gary D. Barnett“To be GOVERNED is to be watched,…See More
8 hours ago
0 Comments 0 Favorites

Burbia commented on stormtruther's blog post Understanding The Fabian Window
"Interesting that the CFR is rival to the CNP. Look up the members of each organization. Orange Man…"
11 hours ago

Burbia commented on stormtruther's blog post Jennifer Aniston: Braless star leaves little to the imagination in cream satin gown at the SAG awards...no, its a real headline!
"I'm not sure why, but there seems to be an effort to say it is Jennifer Tranniston. The claim…"
11 hours ago

Lori commented on steve's blog post Exposing the evil behind the whores who sold out america
"I was one of their brain fragmenting torture prisoners. It goes way beyond whore. Complete black…"
13 hours ago

Lori commented on stormtruther's blog post Jennifer Aniston: Braless star leaves little to the imagination in cream satin gown at the SAG awards...no, its a real headline!
"Don't you mean braless slut??? They still think farming sluts was a good idea."
13 hours ago

steve commented on stormtruther's blog post Jennifer Aniston: Braless star leaves little to the imagination in cream satin gown at the SAG awards...no, its a real headline!
"google aniston nude if you want a passel of naked puppies Steve"
13 hours ago