If You Only Knew How Bad Things Really Are 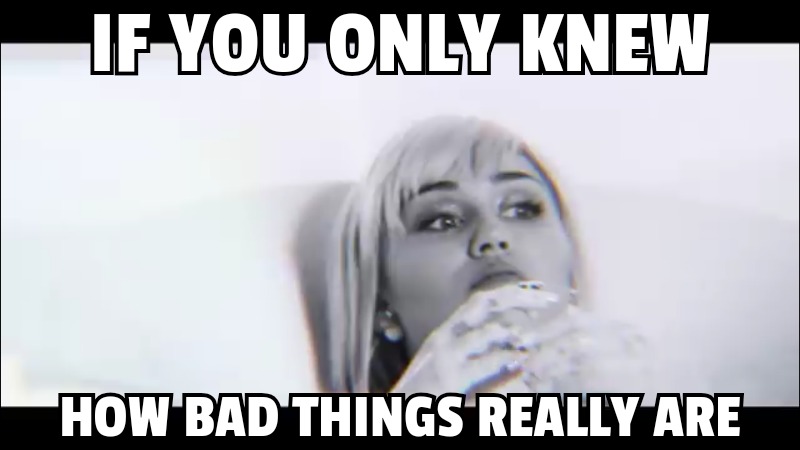 cheeki tea - When I was 46, five years ago, I was seeing this 23 year-old girl. One day, I was telling her how things were when I grew up, about 40 miles north of Cincinnati. A neighbor, who was 50 at the time, would nod occasionally as they listened. I said that firstly, there were no cell phones. The only phones were attached to the wall with a coiled wire, and if you called someone, you had to stand right there the whole time, like in the days of telegraph lines. There were only three main TV stations, all local, and maybe one or two UHF you could pick up, depending on the weather. Nobody stayed up all night, unless you worked a weird shift.

On Sundays, you were lucky to find a gas station open, much less a grocery or any other kind of a store. Everyone was off Sundays so they could go to church. There was no internet. And as I spoke, and the neighbor nodded, her eyes became bigger, and bigger, like "what big eyes you have" bigger. The grip on her cell phone became more white-knuckled with primordial fear and anxiety. I thought she was going to ask us how we survived. I thought we would have to take her to the emergency room, where they would relieve the incredible fluid pressure in her eyes with two large-bore hypodermic needles. But, whew, no, thank goodness. What a tale she had to tell her female room mates though.

Well if your a millennial, not too bad at all. - they don't know what 'good' (-normal) is. Tell them about some adverse or sad event and the most you'll get is... "Well shit happens."

How bad are they?

Mr. Sizzle commented on Aaron's blog post Never Relent – Why Did The DOJ Release SSCI Vice-Chairman Mark Warner’s Text Messages on February 9, 2017?…
"All that is meaningless once you realize it’s ALL theater and nothing changes for the good.…"
5 hours ago

"It’s all in there of what the agenda is."
6 hours ago

"@Doc Vega “James, Buddy I'm not too sure I would have ever recommended the Fuehrer for a…"
6 hours ago

"If were not careful we will wind up like the Indians, that looks like the globalist plan"
15 hours ago

"James, Buddy I'm not too sure I would have ever recommended the Fuehrer for a leadership…"
17 hours ago