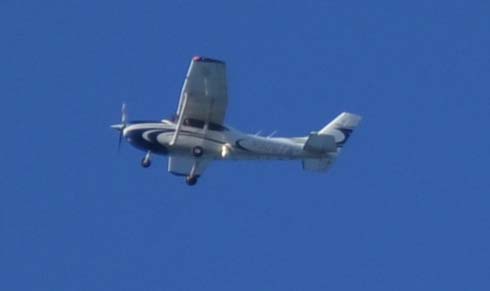 A zoomed-in shot of the plane flying over Quincy shows that, despite concerns, it is not a drone.

Photos of one of the planes that have been flying over Quincy show that, despite suspicions, the aircraft is not a drone.

The Cessna single-engine airplane, which residents have captured in photos, has been flying overhead for weeks, turning circles around the Quincy and Milton air space.

Although people have gotten a better look at what the plane is, it's still unclear what it’s doing or who's doing it.

“We’ve received a couple more phone calls and the response is the same,” said Christopher Walker, spokesperson for Mayor Thomas Koch. “The FAA confirmed that it is a sanctioned flight, and there is no information beyond that.”

FAA spokespeople have said the aircraft is not a drone, but refused to elaborate on the machine’s purpose.

The tail number, N906TM, which can be seen in one photo, is registered to a company called RKT Productions. The only information that could be found on the company is a post office box in Bristow, Va.

A spokesman for the nearest airport, Manassas Regional Airport, had never heard of the company and said the plane did not fly out of that airport.

But Quincy residents say there is more than one aircraft flying overhead.

“There’s definitely more than one plane,” said Jennifer Azevedo-Andre, who lives in Merrymount. “[There’s] the one we could get a picture of. The other one has a dark blue belly. My husband is a pilot…the Cessna can only fly for seven to eight hours, so there is definitely another plane that comes to relieve it.”

Residents have not seen the tail number on the second plane.

For residents, the purpose of the plane is practically irrelevant, as it’s the noise, continuous since late April, that has been the most distressing.

“We’re very reasonable people,” said Azevedo-Andre. “There may be a valid reason for them to be covert, to explain it might undermine its purpose, but I can tolerate for so long and no one can give us a timetable of when it will stop.”
http://www.boston.com/yourtown/news/quincy/2013/05/photos_prove_suspicious_aircra.html

Less Prone commented on James Roberts's blog post Robert Kennedy Demolishes Dershowitz With Big Pharma / Vaccine Facts In Debate
"It tells a lot about our society when pedo creeps like Dershowitz are given any media attention,…"
12 hours ago